The IDF's central command called a massive surprise training exercise in the West Bank on Sunday. The drill was held to test reservists' alertness and to prepare for the possibility of a possible escalation in the West Bank.

The drill is the first in three years and takes place only two weeks after IDF Chief of Staff Lt-Gen. Gadi Eisenkot took control of the army, replacing Benny Gantz, who completed his five-year term last month. 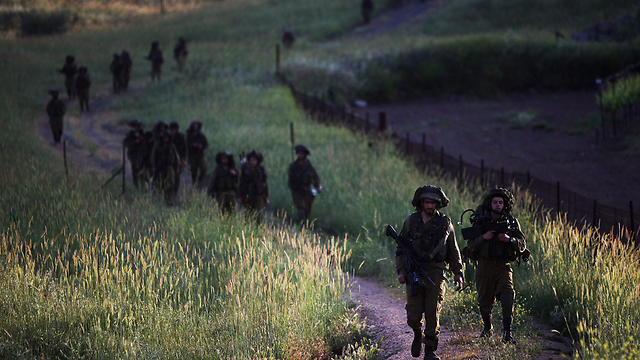 The drill saw some 13,000 reservists received phone calls, of which 3,000 were actually called up for duty ahead of a full day of training operations Monday. The drill – which will see two large full scale training operations covering the entire Judea and Samaria (West Bank) region, and will involve armored, artillery and air forces.

The army further said it would train for a possible kidnapping scenario, as well as practicing arrest raids.

A terse statement said Eisenkot had called a "surprise exercise in Central Command" - the military front that controls the West Bank.

Footage of the exercise filmed by an Israeli television station showed soldiers in armored vehicles practicing how to handle casualties at the scene of a confrontation. The drill came on the day that Palestinians said they would consider dissolving security cooperation with Israel over Israel's recent suspension of tax revenue transfers, though there was no confirmation of any connection. Asked about the timing of the drill, a military spokeswoman said it was "not necessarily linked to anything specific". Israel's last such exercise in the West Bank was in 2012, and drills "are held from time to time," the spokeswoman said. Israel Radio quoted an unidentified senior military source as saying the drill had been unexpected, would be "unusual in size" and would also involve aerial and intelligence units. The Palestine Liberation Organization's 110-member decision-making body was expected to meet later this week to weigh proposals to suspend about a decade of security cooperation with Israel in the West Bank, Palestinian officials said. "Decisions will be taken regarding all forms of relations with Israel," Mahmoud Al-Aloul, a senior official of President Mahmoud Abbas's Fatah movement, told reporters. Israel last month suspended transfer of vital tax funds to protest against the Palestinians joining world bodies such as the International Criminal Court. Under security cooperation renewed since shortly after a Palestinian uprising of a decade ago, the Palestinians have conducted police duties in their territory, including arrests of suspected criminals and anti-Israel terrorists.