Netanyahu lands in US ahead of Congress speech

Netanyahu set to address AIPAC and then Congress on following day, as political tensions boil up.

Prime Minister Benjamin Netanyahu has landed in the US ahead of a speech he called "historic" before the US Congress. Netanyahu will address AIPAC on Monday and will then address Congress on Tuesday in a speech that has seen political tensions between Israel and the US reach a record high.

According to a source within Netanyahu's entourage, the prime minister will expose details of the looming deal with Iran, which will show the world powers have conceeded to much to Iran as part of the negotations.

Despite the comments, the US and Israel showed signs of seeking to defuse tensions on Sunday ahead of the speech in which he will warn against a possible nuclear deal with Iran.

Policy differences over the negotiations with Iran remained firm, however, as Netanyahu set off for the United States to deliver the speech, which has imperiled ties between the two allies.

There are no plans for Obama to meet with Netanyahu, with the White House officially citing its practice of not engaging with world leaders in close proximity to elections. Israel's elections are set for March 17. Vice President Joe Biden and Secretary of State John Kerry will be traveling abroad on trips that were only announced after Netanyahu accepted lawmakers' invitation to speak to Congress.

More than a half-dozen House and Senate Democrats have said they will skip the speech, calling it an affront to Obama and the administration as they engage in high-level negotiations with Iran over its nuclear program. 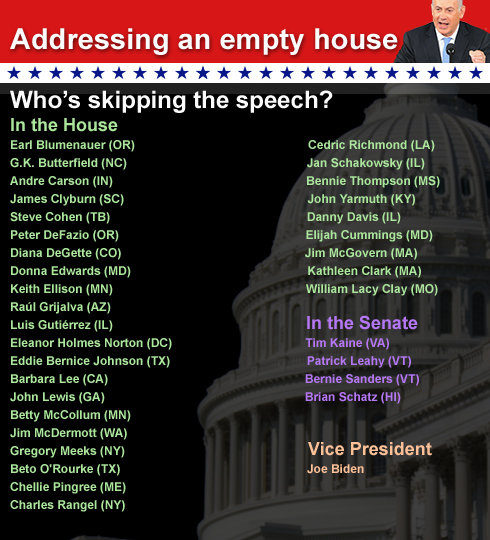 Israel fears that US President Barack Obama's Iran diplomacy, with an end-of-March deadline for a framework accord, will allow its arch foe to develop atomic weapons - something Tehran denies seeking.

By accepting an invitation from the Republican party to address Congress on Tuesday, the Israeli leader infuriated the Obama administration, which said it was not told of the speech before plans were made public in an apparent breach of protocol.

Kerry reiterated Washington's determination to pursue negotiations with Iran, saying on Sunday the United States deserved "the benefit of the doubt" to see if a nuclear deal could be reached.

Asked about this on the ABC program "This Week", Kerry said "the prime minister of Israel is welcome to speak in the United States, obviously. And we have a closer relationship with Israel right now in terms of security than at any time in history."

He said he had talked to Netanyahu on Saturday, adding, "we don't want to see this turned into some great political football." Israel and the United States agreed that the main goal was to prevent Iran from getting a nuclear weapon, he said. 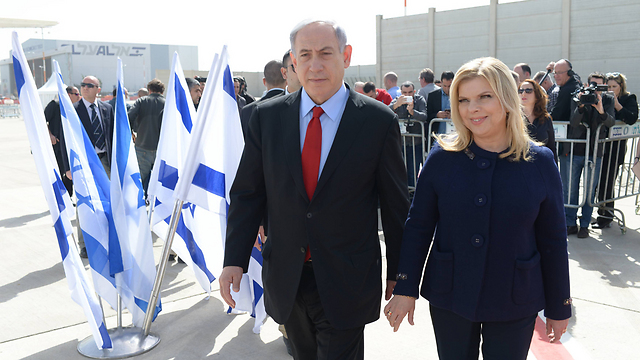 Netanyahu takes off for US (Photo: GPO)

In remarks on Saturday at Jerusalem's Western Wall, Netanyahu said: “I would like to take this opportunity to say that I respect US President Barack Obama.” He added that he believed in the strong bilateral ties and said, "that strength will prevail over differences of opinion, those in the past and those yet to come.”

Netanyahu did not repeat those remarks as he departed on Sunday. The Israeli prime minister, who is running for re-election in a March 17 ballot, has framed his visit as being above politics and he portrayed himself as being a guardian for all Jews.

"I’m going to Washington on a fateful, even historic, mission," he said as he boarded his plane in Tel Aviv. "I feel that I am an emissary of all Israel's citizens, even those who do not agree with me, and of the entire Jewish people," he told reporters.

Netanyahu is expected to use his speech to urge Congress to approve new sanctions against Iran despite Obama's pledge to veto such legislation because it would jeopardize nuclear talks.

US officials fear he is seeking to sabotage the Iran diplomacy, and critics have suggested his visit is an elaborate election stunt that will play well with voters back home.

With Obama past the mid-point of his final term, his aides see an Iran nuclear deal as a potential signature achievement for a foreign policy legacy notably short on major successes.

While White House and Israeli officials insist that key areas of cooperation, from counter-terrorism to intelligence to cyber security, will remain unaffected, the divide over the Iran talks has shaped up as the worst in decades.

Previously Israel has always been careful to navigate between the Republican and Democratic camps. The planned address, however, has driven a rare wedge between Netanyahu's government and some congressional Democrats. Some two dozen or more of them plan to boycott the speech, according to unofficial estimates.

Speaking in Tehran on Saturday, Iranian Foreign Minister Mohammad Javad Zarif accused Netanyahu of trying to undermine the nuclear talks in order to distract from the Palestinians' unresolved bid for an independent state.

"Netanyahu is opposed to any sort of solution," Zarif said.

Hard-line US supporters of Israel say Netanyahu must take center-stage in Washington to sound the alarm over the potential Iran deal, even at the risk of offending long-time supporters.

But a US official, speaking on condition of anonymity, said the "politicized" nature of his visit threatened "what undergirds the strength of the relationship".

As one former US official put it: "Sure, when Netanyahu calls the White House, Obama will answer. But how fast will he be about responding (to a crisis)?"

Last month, US officials accused the Israeli government of leaking information to the Israeli media to undermine the Iran negotiations and said this would limit further sharing of sensitive details about the talks.

"What the prime minister is doing here is simply so egregious that it has a more lasting impact on that fundamental underlying relationship," said Jeremy Ben-Ami, head of J Street, a liberal pro-Israel lobbying group aligned with Obama’s Iran policy.

Netanyahu will address the influential pro-Israel lobby AIPAC on Monday. Even as he makes his hard-line case against Iran, he is expected to try to keep tensions from spiraling, mindful that Israelis are wary of becoming estranged from their superpower ally.