Zionist Union leader says while Netanyahu may know how to deliver speech, after address he remained alone and Israel isolated.

While it is clear that Prime Minister Benjamin Netanyahu is an expert orator, Zionist Union chairman Isaac Herzog said after the Israeli leader's speech to Congress on Tuesday, it will not stop the Iranian nuclear program nor will it sway the agreement currently being drafted by world powers.

Herzog was speaking to supporters in the south in the immediate aftermath of Netanyahu's address to a joint session of Congress, in which he lambasted the agreement currently being put together, which aims to curtail Iran's nuclear aspirations.

"There is no doubt that Prime Minister Benjamin Netanyahu knows how to deliver a speech", Herzog said, "but let's face it. The speech we heard today, impressive as it is, will not stop the Iranian nuclear program." 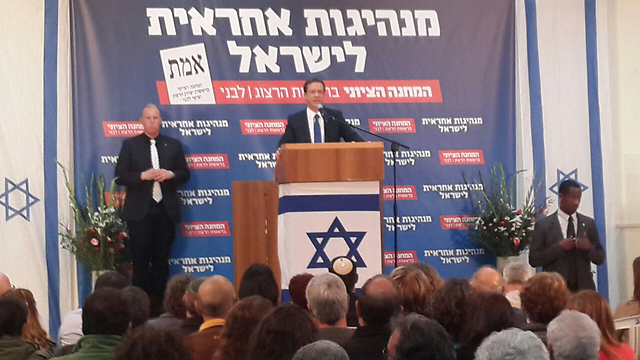 Herzog speaks in south after Netanyahu speech. (Photo: Roi Idan)
"It will also not affect the upcoming agreement – not the content nor the timetable," added Herzog. Israel was facing security issues far more worrying than Iran, Herzog said, and vowed that as prime minister, he would work to ensure that Iran did not acquire nuclear capabilities. "The painful truth is that after the applause, Netanyahu was left alone. Israel was left isolated. And the negotiations with Iran will continue without Israeli participation. This speech greatly damaged the US-Israel relationship. It won't change the government's stance and will only widen the rift with our biggest friend and strategic ally. A rift that will carry a price we will all pay," said Herzog. Herzog said he could also have gone to Washington DC, but decided instead that he would rather be in the Negev and not Washington. He said Israel's biggest problems were in Israel – on the Gaza border, in northern Israel and in Jerusalem. Israel's domestic issues, Herzog said, do not worry him any less than the Iranian nuclear threat, which he does not underestimate. "No Israeli leader will stand a nuclear Iran," Herzog demanded. "The determination to prevent Iran from acquiring Nuclear weapons crosses continents and crosses party lines." "The question is not whether the upcoming deal is bad," said Herzog, referring to Netanyahu's main thrust during his Congress address. "The question is how to prevent a bad agreement." He added: "Iran's nuclear program can only be stopped in cooperation with the United States and the White House." Netanyahu's biggest obstacle to another term as prime minister and his main political rival also said he would alleviate relations with the US when he is prime minister. "I will recruit the international community and all the tools necessary in order to save Israel from the international isolation that Netanyahu imposed on us." Herzog also promised to re-start the diplomatic process with the Palestinians. "This is the only way to stop the cycle of blood and create real change," said Herzog. Herzog said that he would recruit the international community to prevent Iran's plan of attaining nuclear weapons and in the war against terrorists who threaten the residents of the entire region."