The impression left by Netanyahu's speech will melt much faster than the Washington snow
Photo: AFP

Analysis: Instead of garnering the Democratic members' support in order to torpedo the Iranian nuclear deal, the prime minister's Congress speech only served to alienate them.

WASHINGTON – There is one photograph hanging on the wall at the entrance to the West Wing, the White House's executive office building: It's the photo of senior Obama administration officials, headed by the American president, sitting in front of the screen, tensely waiting for an update on the killing of Osama bin Laden.

This is the moment Barack Obama is most proud of in his six years in the White House. He has no intention of repeating this moment when it comes to Iran.

I visited the White House about an hour after Prime Minister Benjamin Netanyahu finished addressing the Congress members. Netanyahu was at his best: Clear, eloquent, self-confident, speaking American like no other Israeli politician can.

One of the Likud leaders once told me that when the Likudniks hear Netanyahu giving a speech in English, they melt. It's the secret of his charm. Every Israeli thinks he can run the state better than him, but who can speak like that in English? Only Bibi. Two weeks before the elections, Netanyahu created a golden opportunity for himself to impress the voters in Israel, and utilized it to the fullest.

In Washington, things look different. "A spectacle," one of the White House officials reacted to Netanyahu's speech. How angry are you, I asked him. He thought it over. It's not befitting government workers of the world's strongest power to confess to any feelings, let alone anger. 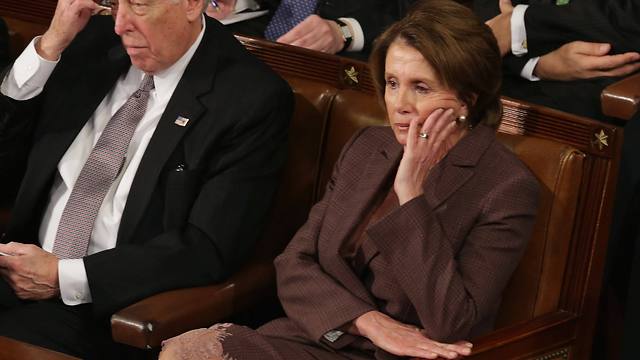 Nancy Pelosi during Netanyahu's speech. 'Saddened by the insult to the intelligence of the United States' (Photo: AFP)

But Nancy Pelosi, the Democratic minority leader in the US House of Representatives, released a particularly angry statement at the end of the speech, saying she was "saddened by the insult to the intelligence of the United States."

It was interesting watching Pelosi during Netanyahu's speech. The press gallery in the Congress hall is located above the speaker, in front of the House members' seats. Pelosi sits in a place of honor, at the center of the floor. She arrived early, all smiles, and avoided joining the bipartisan delegation which went out to greet Netanyahu.

At the beginning of the speech, she stood up together with her fellow Congress members and applauded after each of Netanyahu's crescendos. Later on, she chose to remain seated. An increasing number of members in the Democratic wing, which is located to the right of the speaker, chose to do the same, especially the African American Congress members. As Netanyahu's criticism against the negotiations conducted by the administration grew stronger, Pelosi's face became gloomy. When Netanyahu was done, she rushed to leave the room.

This description is important in order to understand the significance of Netanyahu's speech in terms of the Iranian nuclear program. Netanyahu's decision to address the Congress was allegedly aimed at laying the foundations for a Congress move on the Iranian issue. White House officials are talking about two possible moves: One, a law which will step up the sanctions against Iran; two, a law which will set a deadline for an agreement. Both moves, White House officials say, will torpedo the possibility of reaching an agreement with Iran. The president has already announced that he will veto such an initiative. the houses of Congress can override the veto with a two-thirds "super" majority.

In other words, in order to torpedo the agreement, Israel needs the support of a large number of

Democratic members of the House. Netanyahu's speech Tuesday did not recruit the Democrats, but rather alienated them. See, for example, the response of Pelosi, a prominent Israel supporter. This leads to the conclusion is that Netanyahu's top priority on Tuesday was not the Iranian centrifuges, but rather the polls in Israel. 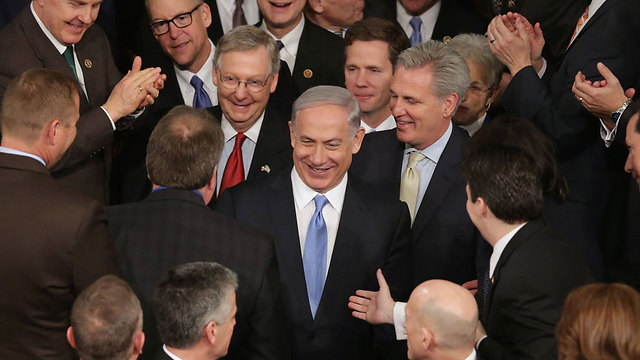 Netanyahu greeted by Congress members. One of their own (Photo: AFP)

As promised, the Congress hall was jam-packed. A hidden hand made sure to fill the absent members' seats. The galleries were also full. They were filled by the Jewish billionaires, Netanyahu supporters, leaders of Jewish organizations and other invitees. The enthusiastic sounds heard by television viewers in Israel did not come from the elected representatives on the floor, but from the guests in the gallery.

Nonetheless, the members of the two Houses of Congress greeted Netanyahu with a lot of affection, way beyond the protocol, way beyond acceptable courtesy. This applies mainly to the Republican side: Netanyahu is one of their own. But it also applies to many Democrats.

From the gallery, the Jewish billionaires supervised their protégés on the floor bellow. They came to see the fruit of their investment with their own eyes. American politics is currently controlled by the big money. The billionaires have failed to elect a president yet, but they have a huge influence on the election of presidential candidates and on the way senators and House of Representative members vote.

It's what my colleague, New York Times columnist Thomas Friedman, calls "Sheldon's world," referring to Sheldon Adelson, the gambling mogul from Las Vegas. Friedman says there is a huge gap between Sheldon's world and the real world. The Congress members, who live on the donations of Adelson and others, applaud according to the orders they receive from the gallery, but the American public opinion lives according to a different agenda.

Netanyahu's speech, which created quite a lot of excitement in Israel, was broadcast in America only on the cable networks, and disappeared from the headlines within an hour. It also disappeared from the Congress members' agenda. They had other issues to discuss: The homeland security budget, Hillary Clinton's security flap, etc.

The round of talks with the Iranian delegation at the foreign ministerial level reached its final stages Tuesday. Secretary of State John Kerry will return to the US on Thursday, but the technical team will continue the talks.

The White House official I spoke to told me that President Obama was determined to reach a political agreement, meaning a framework agreement, by March 24, or at least by the end of March. It's still unclear whether there will be an agreement, but progress has been made. It seems the Iranians are willing to commit to a continuation of the supervision of their nuclear program even after the 10 years or more that will be set as the agreement's expiration date.

Snow is still covering the edges of Washington's pavements. The winter is refusing to end. The impression left by Netanyahu's speech, it seems, will dissipate far faster than the snow.