The prime minister has been warning for over 20 years that Tehran is close to achieving its pursuit of nuclear weapons.

"The most dangerous threat to Israel's existence does not lie in the Arab countries – but in Iran," then-MK Benjamin Netanyahu wrote in a Yedioth Ahronoth column in February 1993.

"The rulers of Iran have said repeatedly that they will have an Islamic bomb and that its first target is Israel," he argued in a piece titled "The greatest danger," claiming that Iran will develop its first nuclear bomb by 1999 – 16 years ago. 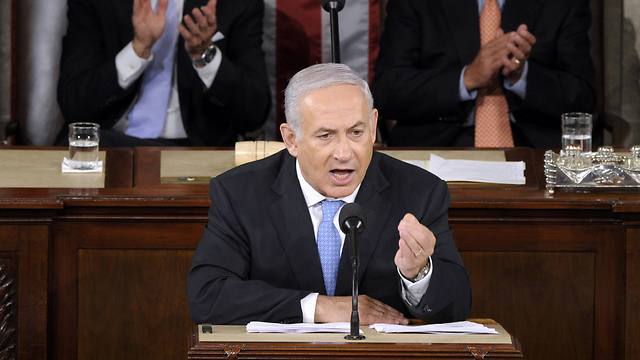 Netanyahu cited then-Iranian president Hashemi Rafsanjani as saying in October 1991 that "the Muslims must cooperate in the production of atomic bombs". He also quoted the vice president of Iran at the time, Akbar Rafsanjani, who said: "Iran's aim in obtaining nuclear weapons is to build together with its Muslim sisters an atomic bomb, in order to put it up against the Israeli atomic bomb."

Netanyahu, who served as a member of Knesset at the time, wrote about the Iranian regime 22 years ago, saying that "it is our duty to make sure, in advance, that it (the regime) will not obtain the tools necessary to realize its aspiration." 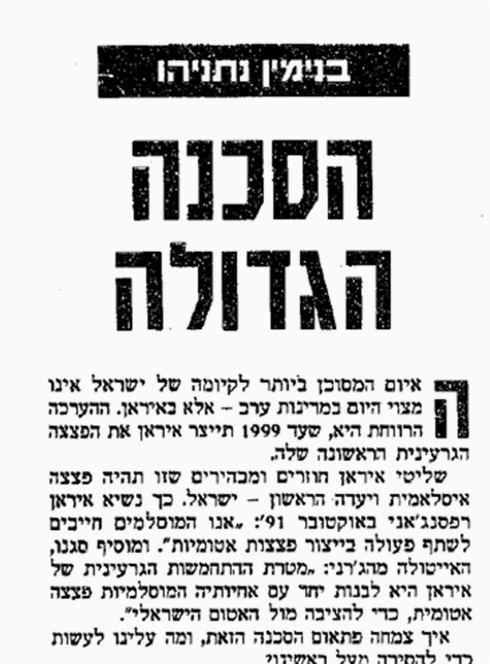 He added: "We can't rely on the assumption that rational considerations concerning a possible Israeli response will intimidate this fanatical mentality. Deterrence alone is not a sufficient Israeli response to the danger of the Muslim bomb. Israel must act decisively to thwart this threat that endangers our very existence."

Netanyahu called on the United States and the Western world to implement policies that will prevent Iran from acquiring technologies that could be used to develop nuclear capabilities: "Additionally, we weed to work in other arenas in order to reduce Iran's ability to build the scientific and industrial infrastructure needed to develop a nuclear bomb."

Oded Yinon from Jerusalem responded to Netanyahu with a letter to the editor, writing: "MK Benjamin Netanyahu is instilling fear in all of us with his stories about Iran's nuclear bomb and the Iranian threat. In his article, he describes a threat, which in the worst case is a potential scenario, while IDF Chief of General Staff Ehud Barak declares that presently, there is no substantial threat from Iran. International newspapers, such as Newsweek, discuss Iran's weakness in details. But Netanyahu, the Iranian affairs analyst, believes otherwise. It's his right, but why is using Iran for political gain? In 1996, after Netanyahu was elected prime minister, Arnold Beichman, a researcher and columnist for Washington Post, wrote that Netanyahu will not hold back from striking a surprise blow against Iran. He noted that the Iranians were very close to being able to launch conventional missile attacks on Tel Aviv. "Netanyahu will not be able to ignore the Iranian threat," he wrote.