Large portion of Israelis are in constant state of overdraft.
Photo: Shutterstock

More than 41% of Israelis in overdraft and half cite high cost of living, study finds

New findings reveal that one third of Israelis in overdraft of more than 10,000 shekels, some 70 percent have been in overdraft for more than a year.

More than 41 percent of the Israeli public is in a constant state of overdraft, and one third have an overdraft of more than 10,000 shekels (approximately $2,500), a new study revealed Thursday.

Similar statistics were also found in a study by the Central Bureau of Statistics (CBS). 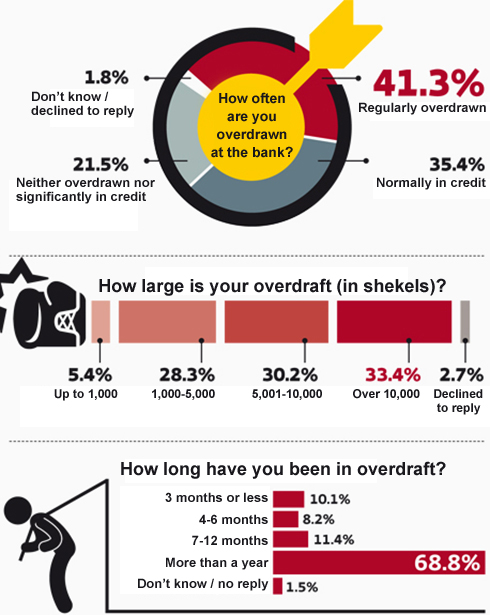 Why are Israelis in overdraft?

According to the study, more than half of respondents blamed the high cost of living for their current economic status, while 20 percent were willing to admit that they are overdrawn because of unwise economic practices.

Furthermore, more West Bank settlers (38 percent) are in overdraft compared to those who live in Tel Aviv (16 percent). The study also revealed that more individuals with a high income (28 percent) are in overdraft compared to individuals with a low income (12 percent). Meanwhile, 46 percent of those surveyed said they did not believe they would be able to resolve their overdraft this year. The study also examined the social effects of being in overdraft, asking whether being in overdraft affected their relationship with their spouses or family members. Of the respondents, 47 percent said yes, to a certain extent, and 51 percent said that their overdraft did not affect their personal lives.

The study had another interesting finding – more than a third of people who took out loans did so in order to close their overdraft. This could well be a wise decision, as the interest for a loan is lower than the interest paid for an overdraft.

However, groups that help provide fiscal support to families suffering from financial difficulties warn that people who take out such loans many times find themselves in overdraft once again. They explain that the loan gives these families a false sense of wealth, so they do not change their behavior patterns and fall into overdraft again – this time with the additional burden of paying off the loan. About 11 percent of the public took out a loan in order to help family members. Of people ages 55-64, the statistic goes up to 20 percent, likely because they must help their children buy a home. The Bank of Israel does not know exactly how many people are in overdraft or how many also have a mortgage or maybe even a loan of some sort in addition. According to the survey, a quarter of the people who are in overdraft have an additional loan that is not a mortgage from one of the banks. Additionally, half of those who have a mortgage also have another form of loan. The findings show that individuals with a low income take out reasonably sized loans – about half of low income individuals who took out more than one loan in addition to a mortgage took out loans worth 10-30 thousand shekels. On the other hand, 20 percent of individuals who make less than NIS 9,000 a month took a mortgage or additional loans worth more than NIS 100,000 – putting them at risk. Banks are still the most popular sources of loans, by far. Some 80 percent of those who took part in the survey said that they had taken a loan from their bank or from their spouse's bank. In second place are rival banks: 16 percent of respondents said they took out a loan from a different bank, even though they do not necessarily share the lowest loan interest rates. The third most popular source of loans is credit card companies (14.7 percent), even though the interest rates for these loans are very high (9-10 percent higher than the average and even higher than the 5-6 percent interest rates at banks). The average loan taken out from a credit card company stands at NIS 30,000, according to the study. The most popular source for the largest loans (NIS 100 thousand and more) were pension organizations, which give out loans secured by savings pensions in case they are not returned. These loans are more popular for older clients who saved up money and therefore can take out a larger loan at a comparably low interest rate (1-3 percent).