COGAT says shipment of tomatoes and eggplants would be brought from territory Sunday.
Photo: Raz Golan

Israel will start buying some fruit and vegetables from the Gaza Strip next week, a partial resumption of imports halted when the Islamist group Hamas took over the Palestinian territory in 2007, Israeli officials said on Thursday.

They said the measure was designed to help a Gaza economy devastated by last year's war with Israel, and to make up for a shortfall in produce from Israeli farmlands left fallow during the current Jewish lunar calendar year in accordance with biblical law.

The move was welcomed by Jamal Abu al-Naja, director of the Gaza Vegetable Production and Export Association, who said he hoped it would help make up farmers losses and eventually encourage working farms to seek bank funding to expand their production. 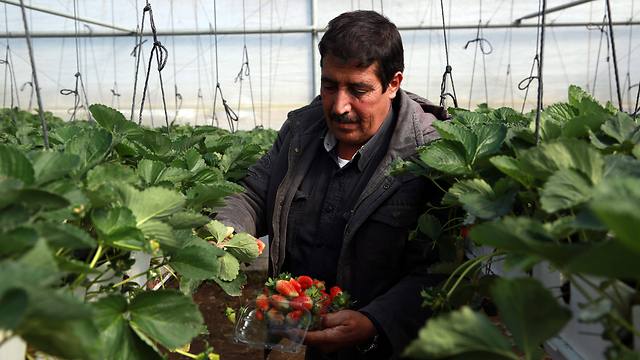 Some Palestinian farmers stopped cultivating their fields all together or sold their land to housing developers after Israeli markets were closed to them in 2007.

Israel, which has been facing international calls to ease its blockade of Gaza, has been gradually relaxing restrictions on commerce across its fortified border since the July-August war which caused widespread destruction in the enclave. It has allowed Israeli transit of Gaza-produced vegetables and Palestinian merchants to the West Bank, and for Gaza farmers to bring tractors in via Israel since November. COGAT, the Israeli military agencies that oversees civilian interaction with Gaza, said a shipment of tomatoes and eggplants would be brought in from the territory on Sunday. "Future stages are expected to include a wider variety of vegetables, totalling 1,000 to 1,500 tonnes. Each tonne is valued at approximately 3,000 shekels ($750)," COGAT said in a statement, adding that the imports were scheduled to run the duration of the Jewish calendar year that expires in September. COGAT deals with civilian authorities but shuns Hamas, which seized Gaza in a 2007 civil war with the forces of US-backed Palestinian President Mahmoud Abbas. Hamas and Abbas reconciled last year, giving rise to a Palestinian unity government. "The steps taken are meant to support the Palestinian population while segregating the Hamas organisation, which is a terror entity that prevents the reconstruction of Gaza and uses its resources," COGAT head Major-General Yoav Mordechai said. Abu al-Naja from the Gaza Vegetable Production and Export Association said Israeli authorities had already carried out quality tests on tomato, eggplant, cucumber and zucchini samples.

"If implemented, it will help farmers make up for their losses, increase the number of workers and encourage investment in the agricultural sector," he told Reuters.