50 years ago: How Mossad caught 'the butcher of Riga'

50 years ago today, on March 7 1965, headlines announced that the body of Herberts Cukurs – the "Butcher of Riga" who was involved in the murder of 30,000 Latvian Jews in the Holocaust and escaped trial by fleeing to Brazil – had been found inside a crate in Montevideo, the capital of Uruguay.

Attached to the corpse was a note listing the Nazi collaborator's crimes, signed by an organization calling itself "We Can Never Forget". Uruguay police said that Cukurs, 65, had been kidnapped two weeks earlier upon his arrival from Brazil, where he lived with his Brazilian wife and children. Initial reports said he had been killed be a Jewish "commando" group.

Cukur's body was discovered after a mysterious report issued to a German news agency in Bonn, anonymously claiming that Cukurs had been killed. The report was immediately forwarded to Uruguayan police. The report directed police to a Montevideo apartment, where they found a large blood-stained crate containing the corpse inside a bedroom. Five bullet casings were found next to the body. 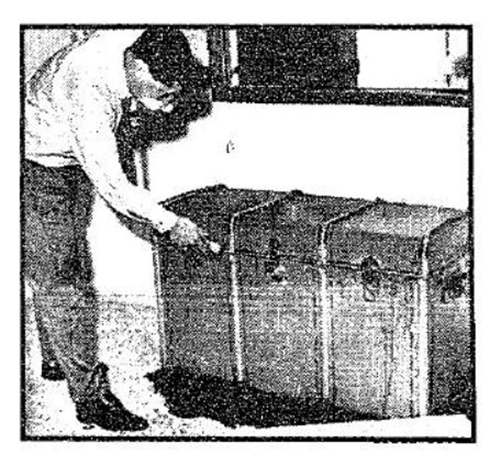 The crate that contained the corpse of Heberts Cukurs (Photo: Yedioth Aharonoth archive)
The local police inspector said it was clear that Cukurs had entered Uruguay with forged passports and with the help of people inside the country.

A search of the apartment uncovered a gold German air force emblem as well as a plane ticket Brazil to Uruguay and then on to Argentina. The investigation also revealed that Cukurs had booked a hotel room, from which he was taken and killed on the same day.

Cukurs fled to Brazil after the end of the Second World War, where he requested citizenship from local authorities.

However, the local Jewish community discovered his request and attempted to prevent it. He married a Brazilian woman and had a child with her, which granted him citizenship according to the law at the time. It thus became impossible to kick him out of the country or extradite him to another country.

In the 1930s, Cukurs gained fame in Latvia as an aviation pioneer, with solo flights to Gambia and Japan. But during World War II, he served as a deputy to the leader of the Arajs Commando, an auxiliary police unit formed after German forces captured Latvia. The unit played a central role in the near annihilation of Latvia's Jewish community. Almost 80,000 Jews, or 90 percent of the prewar Jewish population, were killed during the Nazi occupation.

A survivor said that on November 30, 1941 Cukurs personally shot 500 Jews dead. Witnesses reported that he was particularly cruel and often abused his victims.

After the Nazis were driven out of Latvia by the Red Army, Cukurs fled to Berlin. He then escaped to France once the Nazis surrendered, where he received a political refugee travel document from the Brazilian consulate in Marseilles.

Jews in Uruguay began receiving threads shortly after the discovery of the body. On several occasions, anonymous callers made bomb threats to Jewish institutions and homes.

Then, in 1997, Yedioth Aharonoth published an interview with "Yitzhak", who participated in Cukurs's killing. He said that while disguised as an Austrian, he brought Cukurs to the house in Montevideo, where five Mossad agents seized him.

The plan had been to move Cukurs from Brazil in order to avoid causing harm to the local Jewish community if he were killed, and in order to avoid a death penalty in case of any mishaps. Yitzhak was given the challenging mission of tracking Cukurs down, contacting him, and getting him to Uruguay. "I knew I was embarking on an impossible mission," he said.

Yitzhak took on the persona of an Austrian businessman interested in partnering with Cukrus. He won the mass murderer's trust by showing him scars that he claimed relics of the war.

The two arrived in Uruguay together a few months later. Yitzhak took Cukur to what he said was his office – where the hit team was waiting. Hours after shooting Cukrus, hiding his body, and clearing evidence, they were already on a plane back to Israel.

Meanwhile, Latvia has not forgotten Cukurs. He was the subject of a musical that began touring the Baltic nation a few months ago, outraging many in the Jewish community.

Producer Juris Millers said that because Cukurs never went on trial it remains unclear to what extent he participated in atrocities. "There are a few people who testify that he was a killer and others who say that he was a hero," he said.

The musical did address Cukurs' Nazi past, with the climax showing the aviator surrounded by people shouting "killer." Millers said such scenes prove the show does not glorify Cukurs. Critics countered that the show portrays Cukurs as a hero, thus implicitly suggesting that his accusers are wrong. Latvian government officials have described Cukurs as a war criminal and prosecutors have rejected requests made by his relatives to have his memory rehabilitated.