Netanyahu. A prime minister should be expected to give a slightly more reliable response
Photo: AFP

The Israeli-Palestinian negotiations are a long and winding road. This road isn't marked by candy, but by a lot of blood and a lot of paper. Lots of paper. Tons of documents have been written between the sides and for the sides since the early 1990s, and there is still no peace agreement.

When the Israeli government relaunched the talks with the Palestinian Authority in July 2013, Prime Minister Benjamin Netanyahu chose a different channel of dialogue, a different collection of documents, on which he based the negotiations. Secret negotiations were held between Netanyahu's attorney and confidant, Yitzhak Molcho, and Palestinian President Mahmoud Abbas' associate, Hussein Agha.

Netanyahu's response to the documents published By Yedioth Ahronoth on Friday was a panicked response in which he, unfortunately, did not tell the truth. Netanyahu could have said what his predecessors, Ehud Barak and Ehud Olmert, had said, each in his own turn: We made the Palestinians generous, far-reaching offers, and they turned them down. The Palestinians have proved that they are not a partner. Instead, Netanyahu is saying: It's not me. I'm not responsible. 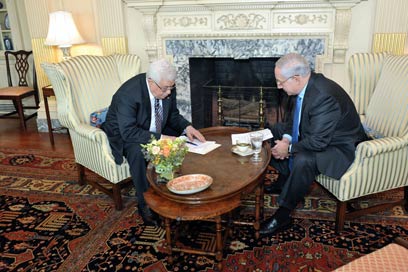 Netanyahu and Abbas in 2010. This is not the way to deal with a key problem in a state's life (Photo: AP)

The secret negotiations between Molcho and Agha took place in London throughout the previous government's term. Agha, an Oxford University professor of Lebanese decent and a PLO member, is one of the most fascinating people on the Palestinian side. Netanyahu empowered Molcho to operate this channel because he was convinced that Agha's word was Abbas' word – they are that close. He was wrong.

When the talks matured into a series of agreements on some of the core issues, Abbas clarified that he was not obligated by what was agreed upon with Hussein Agha. Netanyahu got stuck with Molcho's commitments: He couldn't claim that Agha was an absentminded professor who drafts documents on his own behalf. Everyone – Israelis, Palestinians, Americans – know that Molcho's word is Netanyahu's word.

Agha was the bait, Netanyahu was the gullible person. He wanted to get maximum commitments from Abbas and pay with a minimum of Israeli commitments. He reached the opposite outcome: Netanyahu, through Molcho, agreed to considerable concessions, while Abbas agreed to nothing.

Netanyahu defined Molcho's documents as "an attempt to reach an American draft" and said he had "made it clear in advance that I would oppose the clauses which I find unacceptable."

Molcho did not negotiate with the Americans. He negotiated with the person who Israel considered an authorized representative of the Palestinian Authority chairman. Like in the talks former Prime Minister Ehud Barak held in Camp David, the Americans' job was to serve as a fig leaf for mutual concessions made by both sides.

Was Netanyahu planning to reach an agreement based on these principles? I don’t think so. His intention was to prove to the Americans that he is bold and pragmatic, and then somehow bury the paperwork. That's Netanyahu's big problem when it comes to foreign relations, including the relations with America: There is no credibility. The tricks are too transparent, too clumsy. They end with nothing.

The documents I published on Friday – and there are other documents which will likely pop up in the future – don't say that Netanyahu agreed to divide Jerusalem. On the contrary, they say that the city will remain united. Netanyahu is attacking the report over something it doesn’t contain. But the very general and cautious mention of the Jerusalem issue in the documents says that the Palestinians have interests in the eastern part of the city and that they must be addressed in the negotiations later on.

The Netanyahu camp has another weighty argument: It's only a draft, only negotiations, not a signed document. This argument should be examined in light of the campaign Netanyahu has launched against the Obama administration on the Iranian nuclear issue. In that case too, we are only talking about negotiations.

It's convenient for people in the right, like Avigdor Lieberman and Naftali Bennett, to present Netanyahu, on the backdrop of this affair, as a sheep in wolf's clothing, as a dove pretending to be a hawk.