Inequality between men and women still persists in Israel, with women taking just 18% of governmental positions during the government's past term - a total of 24 women out of 127 appointments. And while the number of women Knesset members reached a new record, only four resolutions on the advancement of women were passed.

These findings, along with other data regarding government's policies on women, are revealed in a new survey conducted by the Citizens' Empowerment Center in Israel (CECI) on the occasion of International Women's Day, on March 8.

Additional findings published over the past year by the Knesset Information and Research Center show that the government failed to pass at least one crucial governmental resolution regarding the advancement of women - namely, the strengthening battered women's shelters, which suffer from a chronic shortage of beds. 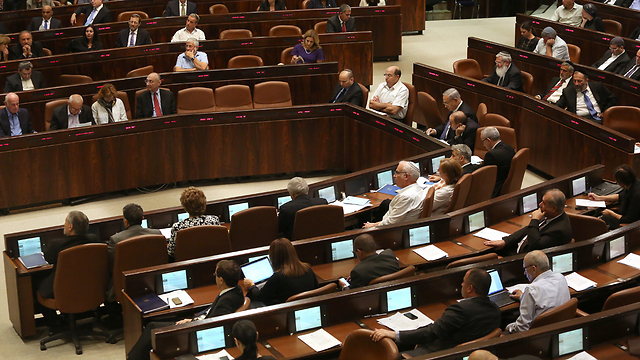 According to estimates, tens of thousands of women living in Israel suffer from abuse. In 2014, 658 women sought help at shelters, of which 54 were rejected due to lack of space. Ruth Resnick, the chairperson of the "No to Violence Against Women" organization, believes that this data merely reflects the tip of the problem. According to Resnick, "over the past 25 years, only one shelter was established - and we still call ourselves an enlightened country."

A study by the Citizens' Empowerment Center in Israel, whose results are published here for the first time, focused on the actions of the last three governments on the advancement of women, at three levels: governmental decisions, legislation from individual Knesset members and the appointment of women to senior public sector positions.

The Yesh Atid party turned in the highest number of private member's bills (nine) on women, followed by Meretz with three. Meanwhile, the government overwhelmingly supported proposals initiated by coalition members, and voted against bills proposed by the opposition, similar to the preceding government.

Tomer Lotan, executive director of CECI, explains that while the data on bills about the advancement of women is encouraging, there is still much room for improvement in other areas.

"The proportion of women in government appointments is particularly low. This finding supports the conclusion that the higher the public position, the lower the rate of women appointed to such roles."

Galia Wolloch, president of NA'AMAT, a Hebrew acronym for “Movement of Working Women and Volunteers", stresses the importance of voting in the upcoming Knesset elections for parties that offer proper representation for women.

"A review of the legislation initiated over the last terms is proof that only a wide female representation in the Knesset will contribute to women's representation, as well as the advancement of their interests and rights in the country," she says.

The 19th Knesset will be remembered as one of the most prominent parliaments in its treatment of gender issues. It was rife with legislative initiatives, some of which were approved and some not, heated discussions and constant attempts to change the public discourse regarding gender and to incorporate more women into key positions in the Knesset and the government.

Three important gender-related bills were passed during the last term: a bill requiring the representation of women in a committee responsible for appointing rabbinical judges, a proposal that generated a stubborn battle against the ultra-Orthodox parties; a bill ensuring the representation of women on the judges' selection committee, and additional funding to municipal party lists in which women comprise at least one-third of members.

The outgoing Knesset included a record number of 27 women MKs, but despite the relatively promising data, the picture remains clear: women are indeed represented in the Knesset, but women's issues and interests remain underrepresented.

"The reason lies primarily in the fact that there are not many parties today that hold primary elections, and in most parties the men are those who put together the list of candidates and select the number of women in the parties," says Likud MK Gila Gamliel. "This is the first barrier that prevents women from entering the political system. However, in parties that do have primary elections, the political system is not necessarily open to new women."

There seems to be a consensus within all parties that women are underrepresented in the Knesset. But what effect, if any, does that have on the female vote on March 17?

In a poll recently conducted by Na'amat, 29% of women said that a proper representation of women in a party would increase the chance they would vote for that party (compared to 22% of men).

The survey also found that 53% of women would be inclined to vote for parties that promoted issues defined as "gender issues" – such as narrowing the wage gap between women and men, subsidizing daycare, extending paid maternity leave and other issues - compared to 44% of men.

Yesh Atid MK Aliza Lavie, who heads the Committee on the Status of Women and Gender Equality, explains that "the major reasons why women are reluctant to get involved in politics is due to predominately male-oriented codes of conduct and behavior, in particular in Israeli politics, which is saturated with aggression, competition and conflicts. My commitment to promoting women's rights existed before I entered politics, and it has accompanied me into the 19th Knesset where I was the MK who enacted the most laws for women." 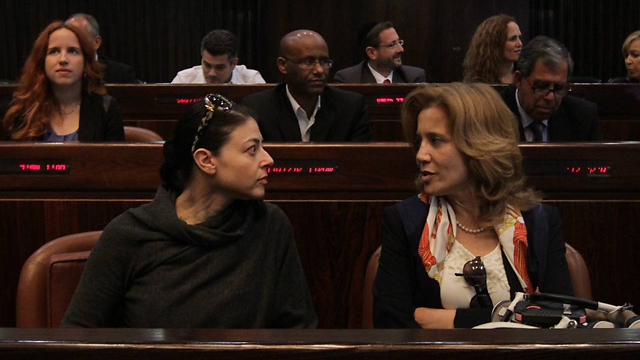 Lavie added: "Other laws that passed a preliminary Knesset reading, and which I will of course promote in the next Knesset, are ensuring proper representation of women in religious councils and on local public committees. In my experience, the principle of proper representation has proved itself and allows entry to women who would not necessarily be able to do so without this law. These women prove to be talented, worthy and highly appreciated, and do not require partial treatment later on in order to remain and move forward in the system.

"It is not true to say that women do not get involved in politics," says Zionist Union MK Merav Michaeli. "One must look at what is happening, for example, with Haredi women who made a clear call that they want to be elected. Who would have thought that they would have the courage to stand up against the ban within the ultra-Orthodox parties and contend?"

Michaeli says that the sole remedy to the inequality problem is legislation.

"Everywhere in the world, the only way to deal with the gender issue is through quotas. A bill that I did not get the chance to promote in the last Knesset, but will be promoted in the next one, will require each party list to have women as at least 40% of their members. Today, women have to compete in an unequal race, from the distribution of assets to their salary, which is two-thirds of the salary men receive, adding on to that the burden of running a household and raising children, which does not carry an economic aspect, but is very demanding in terms of the time they are required to invest."

"The way society sees gender also has impact on the ability to contend and be elected. As long as the cultural image of gender generates an association between leadership and masculine qualities, it will be hard for women to secure leadership positions. As long as women are struggling with the image that a leader necessarily means someone in a suit or a man – there's a problem. Society owes it to itself to receive some assistance to end discrimination."

Today, according to the latest polls, the Zionist Union is expected to win 24 seats, which will bring into the Knesset eight women on its list. The Likud party, on the other hand, with an average of 23 seats in the polls, has only four women in realistic spots. Yesh Atid has a similar number of women to Likud on its list, but is expected to win just 13 seats.

Meanwhile, Moshe Kahlon's Kulanu has three women on its first eight spots, the Yisrael Beytenu list features two women in the top three slots, while the Bayit Yehudi party has two women in realistic spots. Meretz has a female majority – the party, which polls predict will win five seats, will bring three women into the Knesset. The United Arab list features only two women on its list. Shas, the United Torah Judaism party and Eli Yishai's Yachad party do not have any female representatives.