Herzog and Livni at the IDC Herzliya
Photo: EPA

The Zionist Union's election platform, unveiled Sunday, includes initiatives for a diplomatic accord with the Palestinians, strengthening Israel's security and deterrence, stopping the Iranian nuclear program, the development of the strategic alliance between Israel the US, and cooperation with moderate Arab states.

"Reaching a diplomatic accord is of utmost importance and constitutes a condition to ensuring Israel's future as a Jewish and democratic state, which enjoys wide international support and backing," the platform states.

"The Zionist Union will work to formulate a diplomatic accord and to determine Israel's secure and just permanent borders as a Jewish-democratic state, by advancing a security-diplomatic initiative. This initiative will reflect Israel's core values, which are expressed in the Declaration of Independence in the call for peace and good relations between Israel and its neighbors, alongside the unequivocal definition of the State of Israel as the nation state of the Jewish people," the platform further states. 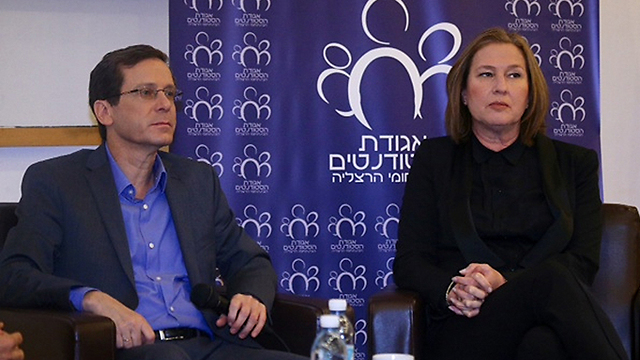 Herzog and Livni at the IDC Herzliya (Photo: Motti Kimchi)

"As you know Netanyahu has failed, and in light of the no-platform the Likud has presented, there's only one option - and that's the Zionist Union," Herzog said Sunday at a press conference in Herzliya to unveil the manifesto.

"A prime minister needs to implement the plan outlined in the campaign platform," Herzog said. "We committed to being people of action, we're people who do." He set three main goals for his first 100 days in office, should he become prime minister: "Implement our economic plan, which once and for all resolves important issues; deal with the housing crisis; and make every effort to present our (peace) initiative to the Arab League." "Israel needs a leader who doesn't just emphasize what he's afraid of, it needs a leadership that has vision," Zionist Union co-leader Tzipi Livni said. "No one should choose between Jewish and democratic. In the upcoming elections, if we don't replace (the current government), there won't be a democratic state here. We present a vision and a leadership that is able to pay a political price when we believe it's justified. Herzog will be an excellent prime minister for Israel. Netanyahu shouldn't be the prime minister anymore." On strengthening Israel's security and deterrence, the platform states: "Maintaining Israel's deterrence is a necessary condition to ensure its future, as well as to create opportunities to advance the diplomatic process. The ever-expanding map of regional threats demands that we keep building up the IDF's strength, while wisely and responsibly balancing it with the other needs of Israeli society." Addressing the Iranian nuclear threat, which serves as a point of contention among the big parties, the Zionist Union's campaign platform notes that, "Stopping the Iranian nuclear program is a goal of utmost importance to the State of Israel. Achieving this existential goal is conditioned on combining smart and effective diplomatic activity, consolidating strategic understandings between Israel and the US, and ensuring Israel and the IDF's preparedness for any scenario. A government headed by the Zionist Union will act to prevent Iran from developing military nuclear capabilities through a final-status agreement between Tehran and the international community, which includes dismantling the existing nuclear infrastructure, and a strict and effective regime of supervision and inspection."

The party stressed the importance of Israel's relations with the US: "The strategic allegiance between the United States and the State of Israel is a basic component of Israel's national strength, and an asset that must be safeguarded and nurtured. Hurting this allegiance, much like the deterioration in Israel's international status, leads to unimaginable damage to Israel's diplomatic and security strength.

"A government led by the Zionist Union will mend the special relationship with the United States, which was seriously damaged during the tenure of the outgoing government, and will strengthen support of Israel from the American public and its elected representatives across the political spectrum."

The party's platform also outlines the basic principles of its socio-economic policy. "The Zionist Union's socio-economic plan centers around the individual, and views the state's role as meeting the individual's needs and ensuring his welfare. The economic plan is the means to achieving the desired social goals. The Zionist Union puts the right to human dignity as a central value. The existence of social security for each citizen and resident is a necessary condition for strengthening of the State of Israel." The platform further states that, "the Zionist Union, out of social solidarity, considers narrowing social and economic gaps as a vital necessity to rehabilitating Israeli society and ensuring its consolidation. Narrowing the gaps will be made possible through significant public investment in education, higher education, professional training, creating jobs, improving citizens' ability to make a living, significantly reducing the cost of living, and dealing closely with centers of unemployment and distress. The Zionist Union views the erosion of the middle class and the expansion of the cycles of poverty and distress as a strategic threat to the strength of the State of Israel." The platform also addresses the housing crisis, stating that, "the right to housing is one of the basic social rights the state is committed to safeguarding as part of its responsibility towards its citizens. The current housing crisis in the State of Israel constitutes a significant blow to the national social strength and to the sense of security and hope for the future generations of Israeli society. Solving the housing crisis must be a central goal for every responsible Israeli government." The party also discusses the "right to healthcare," stating that "accessibility to quality and available healthcare and advanced medical services is a basic human right that must be ensured for every resident of the State of Israel. A proper and effective health policy devotes efforts and resources to preventative medicine, which includes education on a healthy lifestyle, proper nutrition and the prevention of air pollution and other hazards. The phenomenon, in which health and medicine turn from a basic right to a commodity that can only be acquired by those with means, is morally wrong and could lead to the crumbling of the foundations of social unity."