To mark International Women’s Day, we recruited women lawmakers from across the political spectrum, to grill one another on policy.

The outgoing Knesset, which will be replaced in the March 17 elections, had the highest number of female members in Israel's history, with 27 women lawmakers. To mark International Women's Day, we invited some of them to question one another on party policy, their political beliefs and how best to improve Israeli society.

All of those who took part belong to parties expected to cross the electoral threshold and be represented in the next parliament. 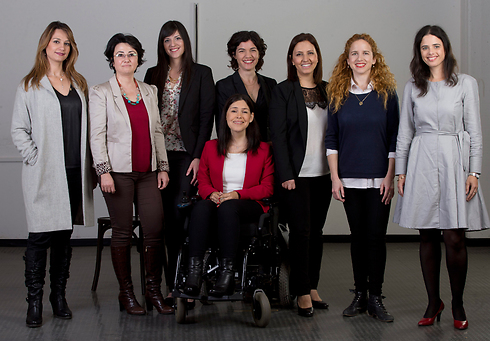 The first question came from Ayelet Shaked of Bayit Yehudi. She posed her question to Stav Shaffir from the Zionist Union.

Shaked: "What are you doing to correct the injustice done your party, which gave the kibbutzim and moshavim land at the expense of the development towns?" Shaffir: "It is sad to hear this question from someone whose party in the last Knesset was solely concerned with the settlements, and transferred to them bonuses of NIS 1.2 billion, while the periphery was abandoned. You on the right have simply forgotten that residents of the Negev, Galilee and the Golan also deserve to live in dignity." ‘How can we help thousands of children?’ Shaffir, in turn, asks Gila Gamliel of Likud: "The prime minister dismisses the collapsing health system, the housing crisis and wave of employee dismissals in the south. As a Knesset member who works to promote social issues, do you not find the fact that your party has no economic platform hard to swallow?" Gamaliel: "Most of the parties present a false picture. We have a proven track record on many issues, such as compulsory education from the age of 3 years, construction of roads and railways between the center and the periphery, two increases in the minimum wage, the establishment of an IDF base in the Negev and the construction of a hospital in Ashdod." Gamaliel asks Tamar Zandberg of Meretz: "I know you prefer to resolve disputes peacefully. So why can't you manage your ideological disagreements with the right in this way? We also are divided on the subject of custody in early childhood. In a divorce, children under the age of 6 are automatically passed the mother for custody. How can we reach understandings that will help thousands of fathers and children?"

Zandberg: "Incitement does not come from the margins, but from officials and ministers. We have in recent months seen events that degenerated into violence: The murder of the youth Mohammed Abu-Khdeir, the arson at the democratic school, the assault of left-wing activists and the attacks on Hanin Zoabi. I expect the right to denounce such incidents. The abolition of the law on the custody of young children will lead to injustice not justice, as the balance of power clearly tends to be detrimental to women."

Representing Israel Beytenu is new politician Shira Mistriel, who has already caused waves for racist comments on Facebook. Not long after she was unveiled by Lieberman as a candidate on the party list, it emerged that a few years ago she published a series of racist posts on her Facebook page. Among other things she used the phrase "Arabs suck" and urged his friends to watch a video on the network called "Arab Wenders' (Yisrael Beytenu’s No. 2, Orly Levy Abecassis, declined to participate).

Zandberg quizzes Mistriel about her comments.

"Is this how you see 20 percent of the population? Is this your democratic worldview? And how is your proposal to revoke the citizenship of Israeli Arabs consistent with democratic values?” Mistriel replies: "I have already apologized for those comments. I find it puzzling that attackers armed with Molotov cocktails and stones are called ‘innocent children’ by Meretz. They have one purpose: to kill Jews because they are Jews. My party and I welcome the minorities in Israel. Our list has a Druze candidate and a Aramaic Christian candidate."

Mistriel also touches on the revocation of citizenship: “The lack of understanding by many on the left about the political program of Yisrael Beytenu is embarrassing. The law on equality of burden must also be applied to Israeli Arabs. If a citizen does not accept the fact that he lives in Israel, the Jewish State, it is inconceivable that he is entitled to benefits from it."

Yifat Sassa-Biton, the representative of the Kulanu party, is also a new face in politics. She questions MK Karin Elharar of Yesh Atid, who is in a wheelchair.

“(Yesh Atid leader Yair) Lapid is using you as a fig leaf for the disabled population. But during your term in government, all aspects of the cost of living increased, and disabled people are finding it difficult to live in dignity. Is it appropriate that young couples pay an unprecedented extra sum of approximately NIS 160,000 for an apartment, simply because of the ego of the finance minister, who in contrast to all expert opinion, sought to promote an unfounded initiative of zero VAT?” Elharar replies: "It is a little sad that someone who has not been in politics for even one moment chooses such a low-hanging bush. For me, taking responsibility is to demand the social ministries. We have increased benefits for Holocaust survivors and made sure they get medicines for free; we made sure that every child can benefit from summer school, and that patients in the periphery do not have to travel to the center of the country for treatment. This we will do in the future too: We will fight for the state to help the middle class and the disadvantaged. It is our duty."

Elharar also gives raises the issue of housing: "The finance minister set a goal: That every middle class couple could afford to buy an apartment. He promoted the national housing program, which included initiatives other than zero VAT, advancing infrastructure, removing barriers and primarily moving the bulldozers."

A state of equality

In the wake of Prime Minister Benjamin Netanyahu’s pledge to annul the criminal sanctions against Haredim who do not enlist in the IDF, Elharar turns to question Ayelet Shaked:

"Could you sit in a government that cancels the “Equal Burden" law?

Shaked insists: "There is no plan to cancel the draft law. We have to let the army and Economy Ministry work. At present, the Haredim are meeting their targets, and any tinkering with the issue purely for election propaganda is harmful."

Mk Hanin Zoabi of the Joint List is one of the most controversial figures in Israeli politics. She directs a question to Yifat Sassa-Biton: "Does equality in the state include me as a Palestinian?” Sassa-Biton replies: "The fact that you do not define yourself as Israeli only exacerbates the conflict and does not serve the Arab citizens who sent you to represent them. The State of Israel has espoused equal rights, and always will strive to that. For as long as you act within the law and do not spit in the well from which you drink and so long as you do not act against the state, it certainly can accommodate you as an equal."

But when Shira Mistriel tries in turn to ask Zoabi a question, the situation becomes complicated: "Is it appropriate for you to represent the State of Israel from a party in which a senior official was suspected of spying for an enemy state? You yourself took part in a terrorist flotilla, did not condemn the murder of three boys, and have called for an armed struggle. Do you think that someone who acted in a similar manner in an Arab country would be accepted - and given the right to freedom of expression?”

Zoabi refuses to answer the question directly: "I have decided not to respond to someone who made statements of racial hatred and nationalism against Arabs. I represent, by right and with respect, 18% of Israeli Palestinians, the native population, who live in their homeland, and do not give up on any national or civil rights. We will not surrender to political terrorism or racist legislation."