The prestigious Israel Prize is at the center of another storm, after the state confirmed Monday that this year there will be no award for Literature Studies, after the judges for the prize committee resigned over interference by Prime Minister Benjamin Netanyahu in the award process. The prize, considered Israel's highest honor, is awarded every Independence Day in four rotating categories drawn from the fields of humanities, sciences, culture and sports, and lifetime achievement. 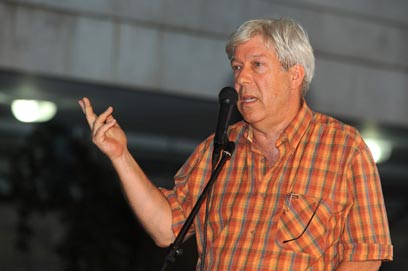 Prof. Ariel Hirschfeld. His dismissal by Netanyahu sparked outrage (Photo: Guy Asayag)
The details of the decision to suspend the prize in this category emerged Monday morning, as part of a High Court hearing on a petition filed by attorney Haim Stenger on behalf of members of Israel's arts community. At the same time, the court also heard a petition to suspend the presentation of the Israel Prize awards for Hebrew literature and poetry, film and lifetime achievement.

The state prosecution attorney, Jonathan Zion Mozes, said that officials were looking into how to appoint new judges. But when the judges were reminded that the deadline for deciding on the recipients of the Israel Prize is March 20 - three days after the Knesset elections – Mozes retracted the claim and admitted that there would not be an Israel Prize for Literature Studies this year.

Last month, the prime minister removed Avner Holzman and Ariel Hirschfeld, two of the judges on the panel for the Israel Prize in literature, citing cronyism and political unsuitability, despite the fact that they had already begun the selection process. The third judge on the panel also resigned, as did judges on selection committees for other prizes, while numerous candidates for the prizes themselves also withdrew their nominations, among them acclaimed author David Grossman and Ruth Dayan, the widow of Moshe Dayan.

Attorney General Yehuda Weinstein subsequently ordered Netanyahu to stop meddling in the Israel Prize mechanisms. "Reverse course," Weinstein wrote to Netanyahu, recommending to the prime minister that he reconsider the positions he had recently expressed regarding the prize. The prime minister subsequently backtracked, but many of the judges and candidates refused to rescind their resignations.

Director Nissim Dayan, a former judge and now one of the petitioners, told the court: "When I was a member of the prize committee, no one intervened or gave us advice. The state representative only sat and wrote down our decision. We had total discretion room, as it should be. This year, all kinds of weird things happened all at once and there was a great deal of intervention. Netanyahu - suddenly the stand-in deputy education minister – banned judges, among them my friend, and declares that they cannot be judges. It makes no sense that they should have to justify why judges deserve to be judges. Just believe they are professional.

"There are two improper aspects to this - political interference, which in turn leads to the discovery of the identity of the other judges, something that damages the entire process. The situation has become something akin to a derailed train."