Likud campaign ad showed 'support group' for those hurt by PM's policy, grouping together Hamas terrorist and labor unions, prompting massive outcry and even threats by unions to vote against PM.

Prime Minister Benjamin Netanyahu has met with the chairman of the Israel Airports Authority workers committee, Pinchas Idan, following a Likud election ad that compared labor unions to a Hamas terrorist. Netanyahu reportedly apologized for the video, which has led to a massive outcry and even threats from labor unions to cut their support for the prime minister.

"Netanyahu took responsibility for the inappropriate content in the video; he apologizes to the workers in Israel and to everyone who was hurt by the content of the propaganda video," said Idan, who is also a member of the Likud and holds the 36th spot on its Knesset ticket, after the meeting.

"Bibi told me that there was no intention for the video to be interpreted that way," Idan said. A Channel 2 report said the Likud has asked him to express his support for the party, but Idan was only willing to announce that he and Netanyahu had made peace.

The video showed a "support group" meeting of a dock worker, a regulatory agent, a former cellular executive, and a Hamas terrorist commiserating about how Netanyahu's policies have hurt them. The video has led to a massive outpour of criticism at Likud over what seems to be a conflation between unions and terrorists. Likud has attempted to distance the prime minister from the ad, and claimed that despite appearing in the video, Netanyahu was not aware of its content at the time. 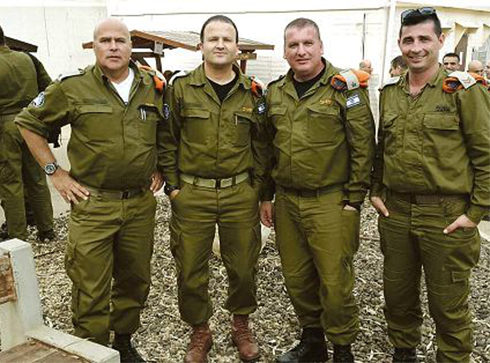 Union workers serving as reservists in IDF slam Netanyahu
"I fought as paratrooper in the Second Lebanon War, Operation Cast Lead and Operation Protective Edge," said Alon Shemesh, a dock worker from Haifa Port. "Now it turns out that I'm a Hamas member according to Likud. Up till know I have always voted Likud, as did my parents and my entire family – but no more." Other echoed his claims: "I serve as reserve officer, I fought in the Second Lebanon War and the last three Gaza operations. I do more than 30 days of reserve service a year, have lost to family members in war and during the summer my son is set to enlist. When I saw the Likud ad I just couldn’t believe it. It crosses a line and proves to me that (Netanyahu) and his ministers are unworthy," said Mariach Rostom, vowing not to vote for Likud either. Like in many countries, unions are a strong political force in Israel. On Monday, Idan, head of the airport workers' unions, sent out a letter saying that despite past support of Likud, the video "turned them into an enemy" and thus "they cannot vote Likud." In an unrelated incident, Netanyahu attempted to thwart another possible loss of votes from unions, by reportedly offering to intervene in the labor dispute currently going on between Israel Chemicals and its workers' union. According to different reports, Netanyahu spoke with Armond Lankeri, head of the union, and reportedly offered to intervene if Lankeri canceled his appearance in Saturday's anti-Netanyahu protest which attracted over 30,000 Israelis. Lankeri did in fact cancel his appearance at the protest, but it was unclear if this was related to the different reports of the deal Netanyahu offered him.

Israel goes to the polls next week and current polls have Netanyahu and his main rival in a dead heat tie.

Itay Blumenthal contributed to this report