'Where do you think Islamic State learned these things? Look for what the Zionist movement did in 1948. The rape, the looting, the murder... the exact same things,' Joint Arab List spokesman says at political panel.

The head of communications for the Joint Arab List party, Raja Za'atra, caused an outrage on Tuesday when he compared the Islamic State to the Zionist movement and claimed Hamas was not a terror organization.

During a political panel organized by the Bar Ilan University's student union, Za'atra said: "Where do you think Daesh (Islamic State) learned these things?"

After someone in the audience responded with "From you!", Za'atra continued: "Look for what the Zionist movement did in 1948. The rape, the looting, the murder... the exact same things." 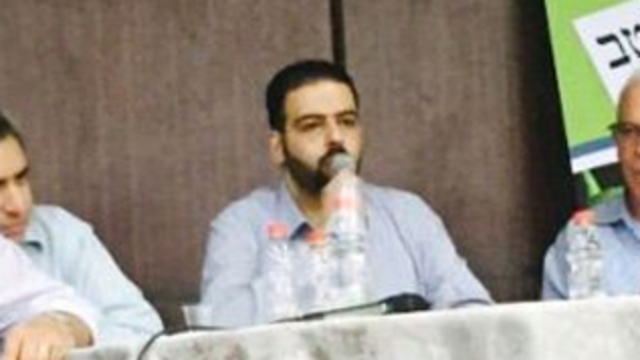 Ignoring the loud booing from the audience, Za'atra went on: "Daesh is the strategic partner to the State of Israel's anti-peace policy."

Za'atra, however, does not regret his comments. "I believe in every word," he said after the panel.

The Zionist Union issued a harsh denunciation of Za'atra's comments. "We expect the heads of the (Arab) list to immediately renounce these outrageous comment comparing Israel and the Islamic State, as well as his remark that Hamas is not a terror organization," the party said in a statement. "The comparison between beheaders who have no humanity, to a nation that was reborn and made many contributions to the world, is intolerable and points to ignorance and hatred." The party went on to say that "we believe Israeli Arab citizens expect the Joint List to promote their rights and their needs and to solve their economic and social problems, rather than fan the flames of incitement and lies that will achieve the opposite. It's regretful that the spokespeople of the Joint List are damaging the desire of the Arab and Jewish publics to live in coexistence. The Zionist Union will fight any attempt - both from within and from without - to hurt the morality of the establishment of the State of Israel as a Jewish and democratic country with full equality to all. So will we also fight Hamas - an Islamist terror organization seeking Israel's annihilation, and we will ensure it remains on the list of terror organizations." Coalition chairman MK Ze'ev Elkin (Likud), who was present at the panel, also issured a condemnation. "Those who allow Hanin Zoabi run for Knesset should not be surprised when her friends praise Hamas or compared the horror of the Islamic State to the Zionist movement. I'm just wondering why (Amos) Yadlin and the Labor party chose to boycott (Baruch) Marzel but didn't mind sitting next to a Hamas supporter." The Joint Arab List said that "the things were said in response to provocation from one of the panel's participants, who claimed Daesh (Islamic State) learned their acts from the representative of the Joint List. The Joint List has issued a decisive statement against Daesh's crimes, and it condemns them regardless of any other historic event." Sweidan Rifat, the academic adviser for Arab students at Bar Ilan University, said that "the atmosphere during the debate was positive, and in this positive atmosphere there was also a mutual democratic dialogue between the representative of the Arab party and Jewish students."