While the Joint Arab List hoped to gain 15 Knesset seats in the recent elections, it still garnered a big achievement with the 14 seats it received in Israel's 20th Knesset. After a high voter turnout in the Arab sector, some polling stations registered a voter turnout of more than 70 percent, the true test of the Joint Arab List will be to stay united and prevent itself from scattering into smaller factions. Many Arab Israeli citizens called upon the members of the party to continue working together on a joint political platform. 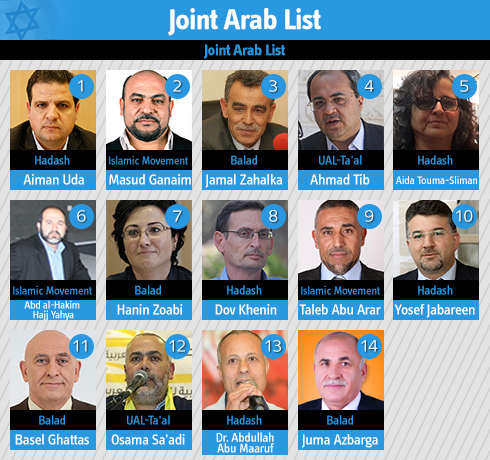 "I hope these results will be a lever for continued cooperation with the (Arab) sector, in order to serve it in all sorts of areas, even outside of the Knesset," said MK Abd al-Hakim Hajj Yahya. "There are a lot of social causes that the Joint Arab List can contribute to. The results of the elections are not a surprise to us, but it is good news. The comments made by Netanyahu against the Arab sector in the last days of the campaign did not make a big impact, but the warning Netanyahu made is very dangerous for the continuation of co-existence," said Hajj Yahya. The Arab Israeli politician has already begun to plan his term in the next Knesset. "I am going to serve the Arab sector on central issues such as planning and construction law, in light of the problems we have in planning, industrial areas and building without a permit," he said. "I will also take care of the advancement of local authorities because in my opinion authorities which plan to rehabilitate have not failed, but rather it shows that there is something in the government's policy that needs to change."

New MK Aida Touma-Sliman hopes to represent women. "I would like to deal with social issues in the next Knesset and the civil rights of the Arab population along with women's rights which I have been occupied with for more than 20 years and will continue to be occupied with in the future."

"Likewise, I will focus on the employment of Arab women and legislation to protect women from violence. Of course the diplomatic issue cannot be ignored and the aspects of political activity," she added.

Regarding the election results, Touma-Sliman said: "Our results provide happiness and strengthen us. The public gave us its wide confidence and clearly said that it supports the approach of unity and the attempt to gain power and protect ourselves from the waves of racism that are washing over Israel."

New MK Osama Sa'adi was disappointed with the change that did not end up coming: "The national right-wing camp and Netanyahu came out with a surprise and kept their reign. We are the third largest faction and this is the first time something like this has happened in history. We achieved another goal – the Yachad faction along with Eli Yishai and the racist Baruch Marzel are outside of the Knesset. Now the work begins to impact and bring about achievement for the sector that sent us."

Sa'adi continued and said: "I want to work in my field, which is the Law and Justice Committee, to prevent racist legislation and to work for fair legislation for the Arab sector."

Sa'adi also said he would like to work on the issue of Palestinian detainees which he says is "a subject that has been close to my heart for over 25 years." Sa'adi also plans to work on subjects such as land confiscation and housing demolitions.

Regarding fears the list will separate once the new government forms, Sa'adi said, "We promised we would create a joint list and we created it, therefore the trust that the Arab sector gave us commits us to continue to work as one faction, there is no reason to break it down. We will not let the Arab public down."

Dr. Yosef Jabraan, another new addition to the Joint Arab List, said that the party will focus on issues that were the basis of their election to the Knesset. "Education, housing and violence are the main issues that I want to deal with. These are the issues that our voters clearly brought up during the campaign," he explained.

"The advancement of Arab education, including higher education, will be my priority, including the allocation of resources, including changing the curriculum to include the Arab-Palestinian identity as well as the restructuring of the system so that it will be managed by Arab educators. Without substantial reform of the education system, we cannot promote and advance the stance of the Arab citizens in Israel."