Absentee ballots in Israel are not available to all citizens, only to soldiers, prisoners, sailors, oversea diplomats, disabled persons and hospitalized people. The votes are placed in a double envelope with identifying information on the outer envelope to ensure voters do not cast their ballots twice. These votes are counted only after the Central Election Committee verifies the voter did not also vote at his official polling station. 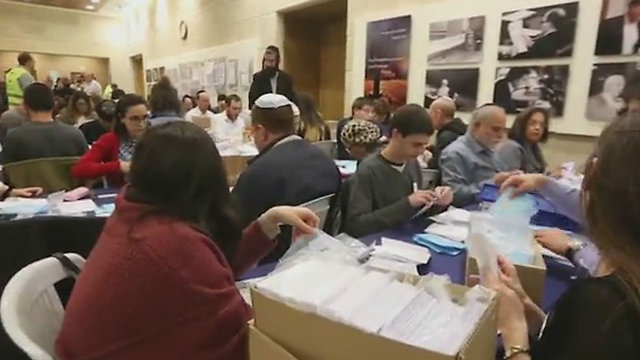 Absentee ballots being counted at the Knesset (Photo: Gil Yohanan)
The Likud party has won over 50,000 additional votes, which secure the place of no.30 on the list, Oren Hazan, in the Knesset.

Meanwhile, Meretz chairwoman Zehava Galon, who announced on Wednesday that she would resign if Meretz remains with only 4 seats after all the votes have been counted, decided to stay in the Knesset after absentee ballots granted the party a fifth seat - on the expense of the Joint Arab List, that dropped down to 13 seats.

"Meretz received its fifth seat from young supporters, from IDF soldiers, who raised the rates of support in the party, which helped Meretz keep its strength as far as voter numbers are concerned - some 170,000 votes - compared to the previous elections. Under the circumstances, this is a success against all odds," Galon said.

"I was moved by the thousands of messages I got, from the support and encouragement," she added.

"We're entering a process of rebuilding Meretz and the Israeli left, a process I will lead with my friends in the party and together we will wave in the face of the right-wing government a flag of peace, social justice, equality and the fight against racism - on both the parliamentary front and outside the Knesset."

United Torah Judaism, which has been moving between 6-7 seats, lost its seventh seat to the Likud party, leaving MK Yaakov Asher out of the Knesset.

The Ale Yarok (Green Leaf) party received some 8,400 votes from IDF soldiers, but remains out of the Knesset as it did not pass the threshold.

On Wednesday, Meretz chairwoman Galon said she was stepping down as party leader to make way for no.5 on the list, Tamar Zandberg.

"I said during the campaign that if Meretz succeeded it would be everyone's success, but if Meretz failed to meet expectations I was the address and I would take personal responsibility. Therefore this morning I announced that I was resigning and relinquishing my seat in the Knesset so that my colleague Tamar Zandberg can enter in my place," she wrote on Facebook.

But now that Meretz seems to have won a 5th spot, Zandberg will be entering the Knesset even without Galon's resignation.

The Likud's 30th seat will go to Oren Hazan, the son of former MK Yehiel Hazan, who is most remembered for the fact he voted twice during the second and third readings of a bill on the emergency economic plan in May 2003, using both his own vote and the panel of absent Likud MK Inbal Gavrieli. Hazan attempt to tamper with the evidence by removing the voting panels in question from the storeroom in which they were kept, but he was caught in the act by the Knesset's CCTV.

When initial vote count showed he was elected into the Knesset, Oren Hazan said: "At the moment I'm very anxious, I don't know anymore - they say (we got) 29, 30 or 32 seats. I'd rather wait patiently for the final results. I have trust in the soldiers who voted correctly for the Likud and believe I'll enter the next Knesset."

The counting of absentee ballots started on Wednesday night at around 10pm. While unofficial results were released on Thursday, final results are expected to be announced on March 25, the day in which results are submitted to the president. The purpose of the wait is to allow time appeal the results. In the 2013 elections, for example, three ballot boxes were disqualified.