Iran limited to 6K centrifuges in draft accord

Draft of agreement between US and Iran on nuclear program would force Iran to cut hardware by 40% for 10 years in exchange for removal of sanctions.

A draft nuclear accord now being negotiated between the United States and Iran would force Iran to cut hardware it could use to make an atomic bomb by about 40 percent for at least a decade, while offering the Iranians immediate relief from sanctions that have crippled their economy, officials told the Associated Press on Thursday.

As an added enticement, elements of a UN arms embargo against Iran could be rolled back.

The very existence of a draft in circulation provided perhaps the clearest indication the sides were nearing a written agreement as they raced to meet a March 31 deadline for a framework pact. The deadline for a full agreement is the end of June. 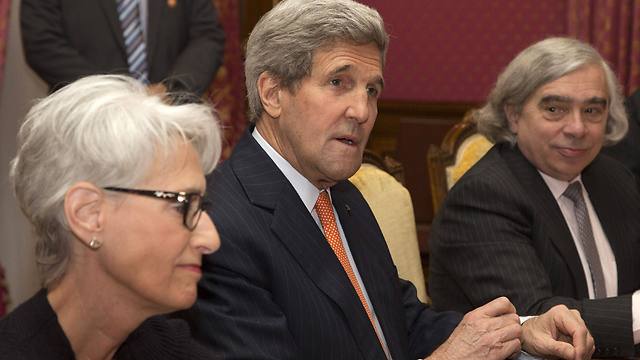 US Secretary of State John Kerry sits at the negotiating table with US Under Secretary for Political Affairs Wendy Sherman and US Secretary of Energy Ernest Moniz (Photo: AP)

Officials said the tentative deal imposes new limits on the number of centrifuges Iran can operate to enrich uranium, a process that can lead to nuclear weapons-grade material. The sides are zeroing in on a cap of 6,000 centrifuges, officials said, down from the 6,500 they spoke of in recent weeks.

That's also less than the 10,000 such machines Tehran now runs, yet substantially more than the 500 to 1,500 that Washington originally wanted as a ceiling. Only a year ago, US officials floated 4,000 as a possible compromise.

But US officials insist the focus on centrifuge numbers alone misses the point. Combined with other restrictions on enrichment levels and the types of centrifuges Iran can use, Washington believes it can extend the time Tehran would need to produce a nuclear weapon to at least a year for the 10 years it is under the moratorium. Right now, Iran would require only two to three months to amass enough material if it covertly seeks to "break out" toward the bomb.

The one-year breakout time has become a point the Obama administration is reluctant to cross in the set of highly technical talks, and that bare minimum would be maintained for 10 years as part of the draft deal. After that, the restrictions would be slowly eased. The total length of the deal would be at least 15 years, possibly even 20. 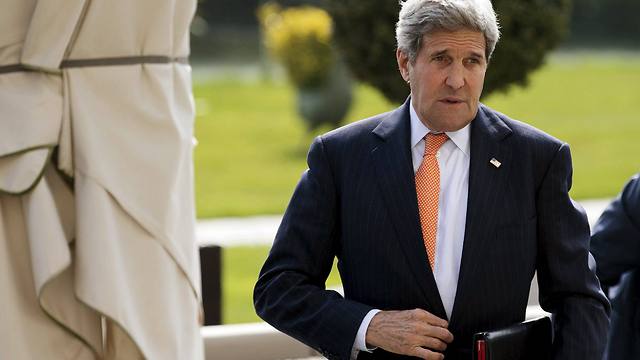 US Secretary of State John Kerry walks back into the hotel after lunch and a morning meeting with Iran's Foreign Minister Mohammad Javad Zarif (Photo: Reuters)

Among US allies, France is the most adamant about stretching out the duration of the deal. A European official familiar with the French position said it wants a 25-year time-span.

As part of the agreement, punitive US economic sanctions would be phased out over time. President Barack Obama has the authority to eliminate some measures immediately, and others would be suspended as Iran confirms its compliance over time. Some sanctions would be held to the later years of the deal, while a last set would require a highly skeptical US Congress to change laws.

Although time periods and sanctions schedules have previously been discussed, it is only in recent days that officials confirmed these understandings have been put down in a formal draft. The officials demanded anonymity because they weren't authorized to speak publicly on the confidential talks. 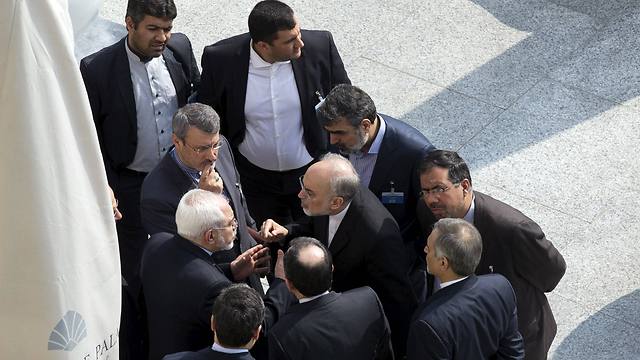 Meanwhile, a senior European negotiator said on Thursday that the six world powers are unlikely to reach a framework agreement with Iran in the coming days as the sides are still far apart on key issues, blaming Tehran for failing to compromise.

"Contrary to what the Iranians are saying with regard to 90 percent of an accord being done, that's not true," the negotiator told reporters on condition of anonymity. "We are not close to an agreement."

The current round of talks in Switzerland may need to continue beyond Friday, the official said.

"We are pretty far away. There are a lot of issues that still need to be resolved. The Iranians must make substantial concessions," he said.

US Secretary of State John Kerry said the sides were working on difficult issues.

"We're pushing some tough issues but we made progress," Kerry told reporters, adding that it was unclear when the US delegation would return to Washington.

Also on Thursday, a senior US Treasury official said the Obama administration will work with Congress to impose further sanctions on Iran if a nuclear deal is not reached.

"Our team stands ready to raise the costs on Iran substantially should it make clear that it is unwilling to address the international community's concerns," said Adam Szubin, the acting head of Treasury Department's Office of Terrorism and Financial Intelligence.

Speaking before the House Committee on Foreign Affairs, Szubin also said the United States will remove sanctions on Iran only in stages as part of a nuclear deal, tied to Tehran's "verifiable" steps in curbing its nuclear activities.

Iran insists its program is solely for peaceful energy, medical and research purposes, though many governments believe it has nuclear weapons ambitions.

It's unclear how complete the draft agreement is. Iran's deeply buried underground enrichment plant remains a problem, officials said, with Washington demanding the facility be repurposed and Tehran insisting it be able to run hundreds of centrifuges there. Iran says it wants to use the machines for scientific research; the Americans fear they could be quickly retooled for enrichment.

A planned heavy water reactor will be re-engineered to produce much less plutonium than originally envisioned, relieving concerns that it could be an alternative pathway to a bomb.

Iran's atomic energy chief, Ali Akbar Salehi, told reporters this week almost all the technical work was done, but other officials said several obstacles still stood in the way of the framework.

Any March framework agreement is unlikely to constrain Iran's missile program, which the United States believes may ultimately be aimed at creating delivery systems for nuclear warheads. Diplomats say that as the talks move to deadline, the Iranians continue to insist that missile curbs are not up for discussion.

US Secretary of State John Kerry and Iranian Foreign Minister Mohammad Javad Zarif met for the fourth straight day Thursday. Much of the nitty-gritty negotiating was being handled by US Energy Secretary Ernest Moniz and Salehi, both nuclear physicists.

The talks formally remain between the Iran and six powers, but Kerry and Zarif have done most of the heavy lifting in recent months. If they make enough progress over the next days, foreign ministers representing the other nations at the negotiating table will be invited to put the finishing touches on the agreement. That may not happen until next week.

If a deal is reached, officials say various layers of UN sanctions on Iran will be eased. That will include parts of the UN arms embargo, with Russia and China, in particular, more forward-leaning on that front and talking about acting within weeks of a full accord. Some restrictions will stay in place, however, such as on the transfer of missile technology.

Any agreement faces fierce opposition from the US Congress as well as close American allies Israel and Saudi Arabia, which believe the Obama administration has conceded too much.

Senate Republicans and even some Democrats are threatening to upend the diplomacy, demanding congressional approval and threatening further sanctions against Iran. If they can't stop an accord, their interference can make it harder for Obama to live up to his side of the bargain.

After the deal expires, Iran could theoretically ramp up enrichment to whatever level or volume it wants.

Iran already can produce the equivalent of one weapon's worth of enriched uranium with the centrifuges it now runs. However, Iran's supreme leader, Ayatollah Ali Khamenei, spoke of eventually operating enough centrifuges to produce what 190,000 of its current models churn out.