Israel only nation condemned in UN for women's right violations

Israel slams UN Commission on the Status of Women for using women's rights to attack Israel over Palestinians.

Out of nine official documents produced from the UN's annual Commission on the Status of Women report, only one of the UN's 193 members were mentioned in regards to ongoing infringement of women's rights – Israel – in what Jerusalem says in another case of UN bias.

The document, titled the "Situation of and assistance to Palestinian women", slams Israel for the ongoing occupation of the West Bank, a situation which it says has led to "(h)igh levels of unemployment and poverty" among Palestinians, especially women. 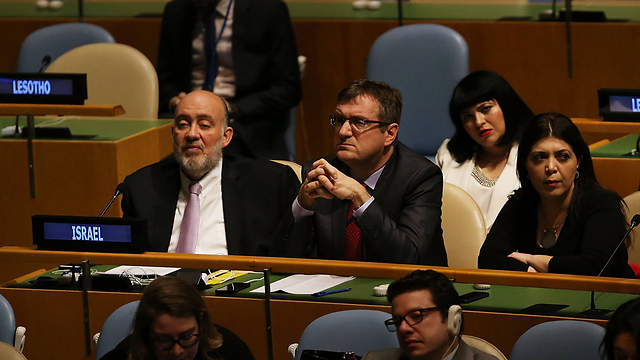 Israeli delegation to UN (Photo: AFP)
"Palestinian women and girls still face significant obstacles in accessing basic services, health care, psychosocial support, water and sanitation, justice institutions and economic opportunities," the report noted. It was the only report that focused on any specific country, and seemed to focus largely on the Palestinian issue, occasionally tying it in with gender-related issues, for example unemployment, which was the main complaint sounded by the report.

It is worth noting that according to a 2014 World Economic Forum report, Israel ranked 57th out 137 for female political empowerment; the US ranked 54th and Saudi Arabia ranked 117th. Some 27 of Israel's 120 Knesset members are women.

Israel slammed the report, with the foreign ministry saying that it was "fighting the decision which was yet another testimony to the hypocrisy of UN members."

The ministry defended Israel's record on women, saying it worked both locally and abroad to advance their status, citing two Israeli professors who even joined the council itslef.

"I am proud to say that when it comes to women's rights, Israel is leading by example. We understand that empowered women are the foundation of thriving societies," Israeli envoy Ron Prosor told the council days before.

"Our 1948 Declaration of Independence - which incidentally, was signed by two women - promises equality to all our citizens. In recent years, Israel welcomed its first female Major General, elected a female chairman to our federal bank, and earlier this year, Miriam Naor was appointed President of Israel's Supreme Court - the second woman to earn this distinction," Prosor said.

Anne Bayefsky, who directs the Touro College Institute on Human Rights and the Holocaust, slammed the UN for targeting Israel: "Not Syria. Where government forces routinely employ rape and other sexual violence and torture against women as a tactic of war. Not Saudi Arabia. Where women are physically punished if not wearing compulsory clothing. Not Sudan. Where domestic violence is not prohibited. There is no minimum age for “consensual” sex. Not Iran. Where every woman who registered as a presidential candidate in the last election was disqualified." Despite having a record number of female lawmakers, Israel's internal policies were not noted. Instead, the document took aim at the Israel and Palestinian conflict, vowing "to continue working towards the realization of a just, lasting and comprehensive peace in the Middle East. The engagement of Palestinian and Israeli women in the peace process and talks must be supported."

Possible Palestinian infringements of women's rights were not noted at all, despite the fact that Hamas has barred women from appearing without headscarves in public and the prevalence of 'honour killings' in Palestinian society.

The UN itself has in the past taken issue with Palestinian treatment of women, with UNRWA cancelling its 2013 marathon in Gaza after Hamas prohibited women from participating.