Representatives from the Likud, Zionist Union, Joint Arab List and Shas meet with president to recommend candidate to form next gov't; the rest of the parties will arrive at President's Residence on Monday.

Representatives from the ruling Likud party were the first to arrive at the offices of President Reuven Rivlin to officially begin the coalition process Sunday morning. The president, who then met representatives from each of Israel's political parties in order to hear their recommendation for who should become the next prime minister, urged unity after what he said was a divisive election in which "hurtful" comments were made against Israeli Arabs.

After meeting with Likud representatives, Rivlin said "we had a turbulent election cycle, rife with emotions, now is the time to start come together and mend Israeli society." 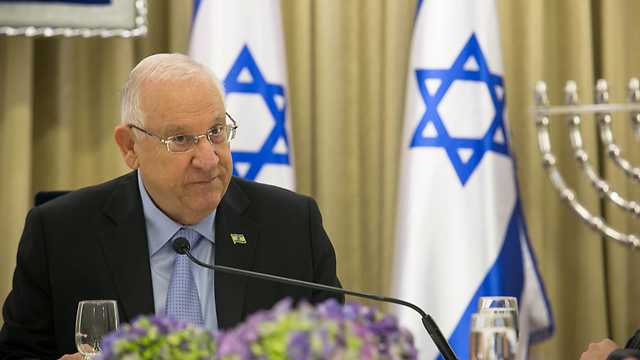 Rivlin urged the parties "to form a government as soon as possible... I urge the Likud members to all within their powers to form a coalition and allow the political system to return to normal functioning."

Rivlin also sounded veiled criticism at Netanyahu, who warned against a high Israeli Arab turnout during the elections in statements many have called divisive, saying that the "next government was elected by the majority of Israel, but it needs to work for all of Israelis: Jews, Arabs, left and right."

In Israel, it is not necessarily the leader of the largest party who forms the next government and becomes the premier, but the one who can form a working coalition, preferably with a majority of at least 61 - in this case, Benjamin Netanyahu and his rightwing Likud party which scored an unexpected election victory on March 17, taking 30 of the parliament's 120 seats, compared with 24 for its closest challenger, the center-left Zionist Union.

First in the office were Likud members Yisrael Katz, Gilad Erdan, Yariv Levin, Zeev Elkin and Ofir Akunis. As expected, they endorsed Benjamin Netanyahu for the role. Katz urged all the party leaders to support Netanyahu and assist them in building a coalition.

Erdan responded to claims the Likud has attempted to frame Arab voters as a 'threat', after Netanyahu said left wing organizations were getting them out to vote in "droves." Erdan said he was saddened that "people misunderstood the statement," explain it was an attempt to get right wing voters out to vote, and not disenfranchise Israeli Arabs. "Israel is a democracy, we are proud of that and will work to protect minorities' rights." 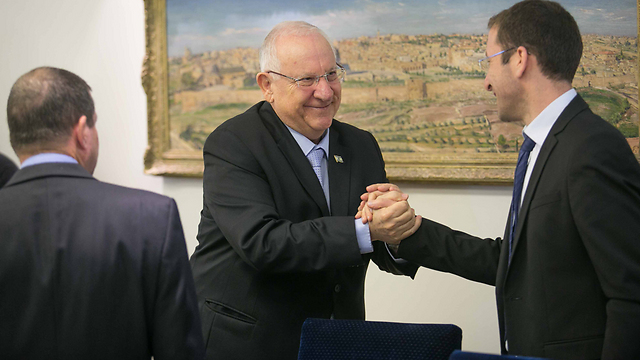 The factions arrive according to their relative size, and thus the at the President's Office on Sunday were the Likud, who arrived promptly at 10 am. An hour later, Rivlin met with the representative of the Zionist Union, MK Eitan Cabel. Cabel will be joined by MKs Itzik Shmuli, Omer Bar-Lev, Ayelet Nahmias-Verbin and Eyal Ben-Reuven. 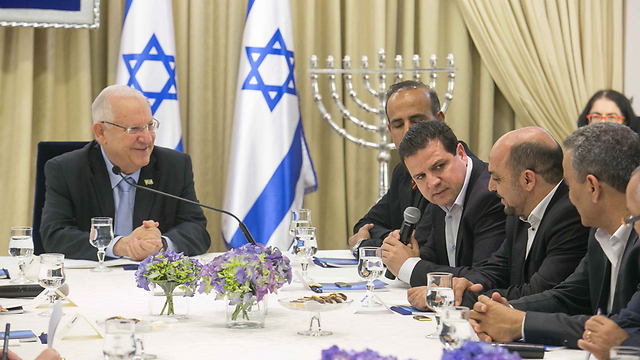 Representatives of the Joint Arab List told Rivlin that they were determined to have the attorney general probe Netanyahu for his comments about Arabs in the last days of his election campaign.

The President called on both sides to stop incitement and told the members of the Joint Arab List that their equation of Zionism with the Islamic State during the campaign was also "unacceptable." The list decided not to endorse any MK for the role of prime minister.

At 2 pm, Bayit Yehudi representatives made their way to the President's Office, followed by Shas and United Torah Judaism.

After the consultations, Rivlin is expected announce what the citizens of Israel and the world already knows – Prime Minister Benjamin Netanyahu will be tasked with forming the next government.

The Director of the President's Office, Harel Tobi, sent a letter to party leaders and emphasized the president's stance, which is that the formation of the government should be carried out as quickly as possible for the public's interest.

Representatives' meetings with the president will continue on Monday with representatives from Yesh Atid meeting with Rivlin first. They will be followed by Kulanu, Yisrael Beytenu and Meretz.

According to Basic Law: The Government, from the moment the president gives an MK the task of forming a new government, he has 28 days to complete the assignment. Should an extension to the process be needed, the president is allowed by law to grant the candidate 14 additional days to build the coalition.

According to the law, the process of forming a government could proceed until May 7, but Rivlin believes that this period is too long and therefore asked Central Election Committee Chairman, Judge Salim Jubran, to allow consultations to begin before the official results have been announced.

Immediately following the consultations, the negotiations to form the next coalition will officially begin – with most of the demands on ministries and requirements already having been made.

One of the biggest issues will be the appointment of the defense minister, with Yisrael Beytenu's Avigdor Lieberman eyeing the position after it was the main goal of his election campaign.

The battle to run the Knesset's Finance Committee will also be a tough one with Kulanu leader Moshe Kahlon aiming for the position as part of his economic axis, alongside the finance portfolio and the Israel Lands Authority.

If the number of ministers is not increase, it will be seemingly difficult to meet the demands raised by some of the parties, and especially demands from members of the Likud who expect to be made ministers after achieving great support in the party's primaries.