Merchant from Jaffa's famous market convicted of forcing himself on 25-year-old-American tourist trying to buy ring from him; 'I pushed him away, but he wouldn't stop.' 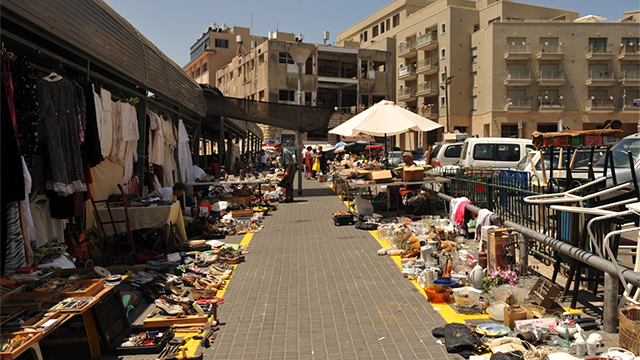 Jaffa flea market (Photo: Benny Deutch)
According to their indictment, filed in 2013, the 25-year-old American arrived at jewelry store owned by Shamian and inquired about a ring. The two proceeded to negotiate a price for the ring and at some point Shamian knelt and tied a bracelet around her ankle, despite protestation on her part, leading her to push him away. According to the indictment, he told the victim he was leaving the store for a short while and threatened her by saying that "it would be suicidal" of her to leave the store. A minute later, he returned and proceeded to rape her. He then pushed her into a nearby clothes store operated by the second vendor who grabbed her face and kissed her.

The second vendor led her into a changing room despite her refusal, while the other vendor stood watch.

In his defense, Shamian said that she kissed him first and said that the intercourse was consensual, but the victim claimed otherwise, saying her tricked her into going into the back of the store under the guise of seeing more products. "I pushed his hand away," she told the court, but he would not stop.

When asked why she didn't flee from the store, she said she " I was afraid because I did not know anyone and wasn't sure she would find help. I thought he would hurt me."