'The least of your problems is what Bibi Netanyahu said during an election campaign,' Republican senator tells US president amid reports the US is 'reevaluating' its Israel policy following PM's rejection of Palestinian state.

WASHINGTON - US Senator John McCain accused President Barack Obama of throwing a "temper tantrum" over comments made by Prime Minister Benjamin Netanyahu who denounced his support for a Palestinian state, adding to the conflict between the White House and the Republican-dominated Congress over Israel.

McCain, asked on CNN's "State of the Union" show if US-Israel relations were at a dangerous point, said, "I think that's up to the president of the United States."

Obama's sensitive relationship with Netanyahu was strained further by comments Netanyahu made in the closing moments of his successful campaign for re-election last week, saying a Palestinian state would not be established as long as he was prime minister. 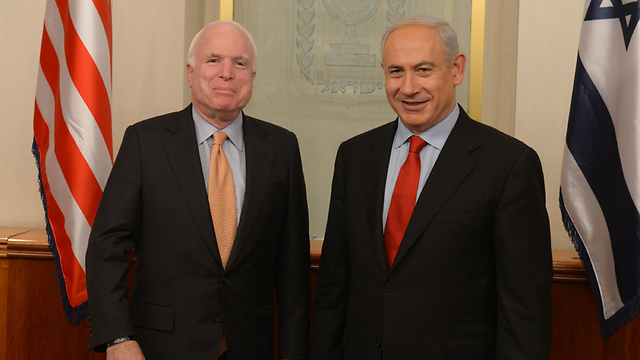 The remarks were widely interpreted as a rejection of the "two-state solution" that has been the basis of decades of talks to end the Palestinian-Israeli conflict, brokered by successive US Republican and Democratic administrations alike.

But the day after the elections, after his party secured 30 seats in the 20th Knesset, Netanyahu was quick to backtrack on his statement, arguing that he was not rejecting Palestinian statehood in principle, but responding to a reality in which the Palestinian Authority has a political pact with the Islamist group Hamas, under which statehood would be unacceptable.

In his first public comments about the issue following the Israeli elections, Obama told the Huffington Post over the weekend that he was taking Netanyahu at his word that the Israeli prime minister was not interested in the formation of a Palestinian state.

Obama said on Friday that Netanyahu's comments had made it "hard to find a path" back to serious peace negotiations. He told Netanyahu on Thursday that Washington would have to "reassess" its policies in the Middle East.

Media reports said the United States was reviewing its position on a UN Security Council resolution on Palestinian state. In the past Israel has relied on US veto power on the Security Council to support its interests.

"The president should get over it," McCain said on CNN. "Get over your temper tantrum, Mr. President. "The least of your problems is what Bibi Netanyahu said during an election campaign. If every politician were held to everything they say in a political campaign, obviously that would be a topic of long discussion."

McCain, a leading voice in Congress on foreign relations, urged Obama to focus on the growing Islamic State threat in the Middle East and curbing Iran's nuclear program.

In Israel, Netanyahu's allies blamed Obama's unprecedented criticism against Netanyahu on a misunderstanding.

Strategic Affairs Minister Yuval Steinitz acknowledged the problem but pointed the finger at Washington for failing to understand the prime minister's position.

"If the Americans are finding it difficult to understand or accept our clarifications (on Palestinian statehood), this is certainly worrying and requires tending to," he told Israel Radio. "He (Netanyahu) didn't say this (statehood) is 'unacceptable'. He said reality has changed."

With no peace talks under way, the Palestinians have taken steps to seek international recognition of their independence unilaterally. So far most Western countries have held back from diplomatic recognition, arguing that a Palestinian state should emerge from negotiations with Israel.

Washington has long used its veto in the UN Security Council to prevent the United Nations from taking steps to recognize Palestinian independence. Some in Israel are concerned that Obama's "reassessment" could jeopardise that stance.

Silvan Shalom, a Likud cabinet minister, said Israel would have little incentive to seek a peace deal if the United States and other countries "lend a hand" to unilateral Palestinian moves. If that happens, he told Army Radio, "then what is the point of signing another (peace) accord?"

Netanyahu has become an issue in Democrat Obama's rocky relationship with Congress, where Republicans hold majorities in both the House and Senate. Netanyahu told the US Congress earlier this month that the United States should do more to stop Iran's nuclear program, speaking at the invitation of House Speaker John Boehner, who did not consult the White House in advance.

A group of 47 senators also bypassed Obama this month by sending a letter to Iran that the White House said undermined negotiations with Tehran on nuclear weapons.