With Yemen in turmoil, Egypt sends warships to secure Gulf of Aden

Egypt and Sudan on Thursday pledged support for the Saudi-led strikes on Iran's Yemen allies the Houthis, even as four Egyptian naval vessels crossed the Suez Canal en route to Yemen to secure the Gulf of Aden.

Maritime sources at the Suez Canal confirmed the vessels' route, saying they expected them to reach the Red Sea by Thursday evening.

Sudan's Defense Minister Abdel Raheem Mohammed Hussein told reporters on Thursday that his country would take part "with air and ground troops in the Decisive Storm operations" against the Houthi rebels, saying Sudanese forces had begun "mechanical movements" towards the area of operations.

US Secretary of State John Kerry spoke with the foreign ministers of Saudi Arabia and other Gulf Cooperation Council members on Thursday and welcomed their decision to take action against the Houthi, a senior US official said.

"He commended the work of the coalition taking military action against the Houthis and noted the United States' support for those coalition efforts - including intelligence sharing, targeting assistance, and advisory and logistical support for strikes against Houthi targets," a senior State Department official said on condition of anonymity.

"The ministers all expressed their support for political negotiations as the best way to resolve the crisis, but also noted that it is the Houthis who have instead waged a military campaign," the official added about the conference call. "They agreed to stay in close contact going forward." 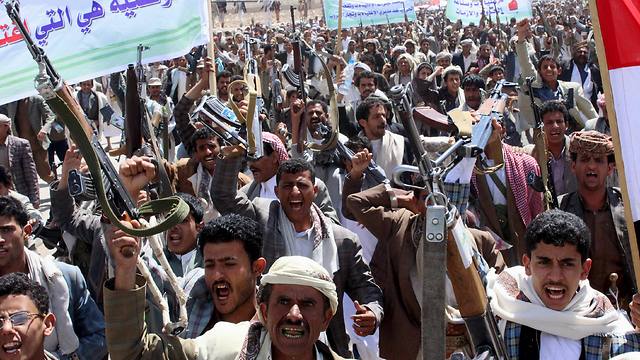 Warplanes from Saudi Arabia and Arab allies struck the Iran-backed Shi'ite Muslim rebels fighting to oust Yemen's president on Thursday, a gamble by the world's top oil exporter to check Iranian influence in its backyard without direct military backing from Washington.

Al-Arabiya TV reported that the kingdom was contributing as many as 150,000 troops and 100 warplanes to the operations and that Egypt, Jordan, Sudan and Pakistan were ready to take part in a ground offensive in Yemen.

Al-Arabiya also said planes from Morocco, Kuwait, the United Arab Emirates, Qatar and Bahrain were taking part in the operation.

A Saudi resident of Riyadh told Ynet that the atmosphere on the street is one of support for the country's rulers.

"People here support the attack and at the same time hate Iran," he said. He added that the people were encouraged by the Arab unity against Iran. "Most Arab countries are participating in the operation," he said.

The Riyadh resident dismissed the possibility of a retaliatory strike against Saudi Arabia by Iran.

"Iran will not respond. The Houthis will react, but I believe the Saudi air force is easily capable of defeating them," he said.

While the Saudi expressed confidence that in the end the Houthis would be defeated, he admitted that the crisis had grave implications for the entire region.

"The situation will certainly be difficult," he said. He ended his comments with one "our (joint) enemy is Iran."

Yemen's slide towards civil war has made it a crucial front in mostly Sunni Saudi Arabia's rivalry with Shi'ite Iran, which Riyadh accuses of stirring up sectarian strife throughout the region and in Yemen with its support for the Houthis.

The crisis now risks spiralling into a proxy war with Iran backing the Houthis, and Saudi Arabia and the other regional Sunni Muslim monarchies supporting Yemeni President Abd-Rabbu Mansour Hadi.

Fighting has spread across the Arabian peninsula country since last September, when the Houthis seized Sanaa and advanced into Sunni Muslim areas, forcing Hadi out of the capital.

State-run Kuwait Petroleum Corp (KPC) said on Thursday the OPEC member has raised security around its oil facilities inside and outside the country.

"In the light of developments in Yemen and to protect the strategic interests of the oil sector and securing oil products for inside and outside several procedures and precautionary steps taken," official news agency KUNA quoted KPC acting chief executive officer Mohammad al-Farhoud as saying.

These measures include "securing all industrial safety and security requirements and raising the level of security measures and to intensify the protection of oil installations in Kuwait and abroad," he said.

But although the news sparked jitters in the oil market, and Brent crude oil prices shot up nearly 6 percent soon after the operation began, Asian importers said they were not immediately worried about supply disruptions.

Most oil tankers from Arab producers such as Saudi Arabia, the United Arab Emirates, Kuwait and Iraq have to pass Yemen's coastlines via the narrow Gulf of Aden in order to get through the Red Sea and Suez Canal to Europe.

The 40 km-wide strait between Yemen and Djibouti and the Strait of Hormuz between the Arabian peninsula and Iran are both considered chokepoints to global oil supplies by the US Energy Information Administration.