Sixty thousand of these leaflets were dropped
Photo: Reuters

US to Syrians: IS will grind you into meat

The Pentagon released on Thursday night copies of graphic of leaflets it dropped on the Syrian city of Raqqa this month, a stronghold of the Islamic State, in an attempt to discourage recruitment by the group.

The grisly, cartoon-style leaflets show recruits lining up to be shoved into a meat grinder and is part of what the Pentagon formally calls "Military Information Support Operations," or MISO, meant to influence thinking on the battlefield. The scene in the leaflet shows that number 6001's turn has arrived, to the horror of the man holding the number, while a recruiter beckons to him. Another recruiter grinds the meat of the man who was number 6000. 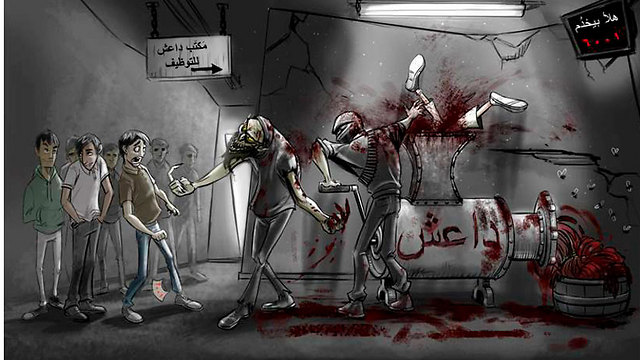 "The message of this leaflet is that if you allow yourself to be recruited by Daesch (Islamic State), you will find yourself in a meat grinder," said Pentagon spokesman Colonel Steve Warren. "It's not beneficial to your health."

The US military has long employed such campaigns in wartime but Warren said this was first of its kind in Syria he was aware of since the United States began bombings in the country last September.