Analysis: Israel has spent five years warning that Iran seeks Shiite domination of the Muslim world, and the Gulf States know by now not to rely on the Obama administration.

Operation Storm of Resolve, designed to rescue Yemen President Abd-Rabbu Mansour Hadi's regime from the clutches of the Houthi rebels, began with an exercise in misdirection.

At midnight between Wednesday and Thursday, the first squadron of Saudi Arabian fighter planes launched attacks on targets in the Yemeni capital, Sana'a – air force bases, arms depots belonging to the rebels, the palace of former president Ali Abdullah Saleh, and a reserve forces base in the south of the city that was taken by the rebels last month.

The strike caught the rebels by surprise. At a meeting earlier on Wednesday night between Houthi rebel leader Abdul Malik al-Houthi and ousted president Salah, the two had coordinated an assault on Aden, Yemen's second-largest city. 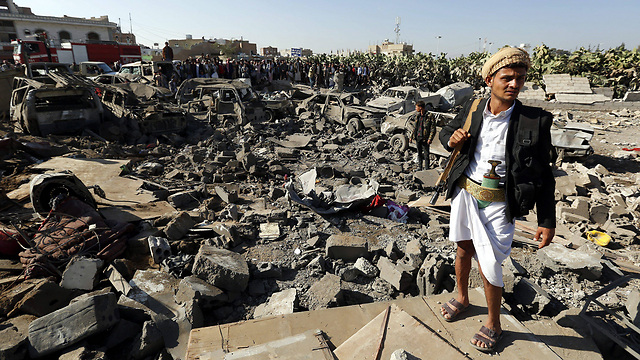 "If Aden falls," the ousted president promised, "Yemen will fall, and the forces will be able to turn their attention to the greater task at hand – taking control of the Bab-el-Mandeb Strait for the purpose of overseeing marine traffic into the Red Sea."

With the Arab response slow in coming, despite threats voiced by senior advisers to the Saudi king, the rebel commanders in Yemen were sure they had at least 24 hours in which to mount operations in the field before the Arab foreign ministers met in Sharm el-Sheikh for an emergency summit. They knew that the battle for power in Yemen would top the agenda, but believed that they'd have until the end of the summit on Friday afternoon before a green light was given to amass an Arab force to take action in Yemen. The also failed to foresee a powerful military strike and believed that time was on their side.

"We decided to take action against the rebels in Yemen without getting the approval of the Arab League," the spokesman for the Saudi Royal Palace said on Thursday morning, following a night of air strikes on Sana'a and the retaking of the airport in Aden.

It's been revealed, meanwhile, that in behind-the-scenes discussions, four Arab states agreed to join the air strikes under the command of the Saudi defense minister, Crown Prince Mohammad bin Salman.

During a tour Wednesday of the Saudi-Yemen border, Salman issued a stern warning to the rebels. "We are committed to the security of the Yemeni people," he declared. "If you continue to undermine the stability and threaten Saudi Arabia, you will get hit hard."

A spokesman for the Houthi rebels responded in kind, commenting: "We have already proved to you in 2009 how easy it is to invade the territory of the kingdom. Your army is weak. Today we are more skilled. When we decide to invade, we won't stop in the city of Mecca, but will continue on to Riyadh to topple the government institutions." 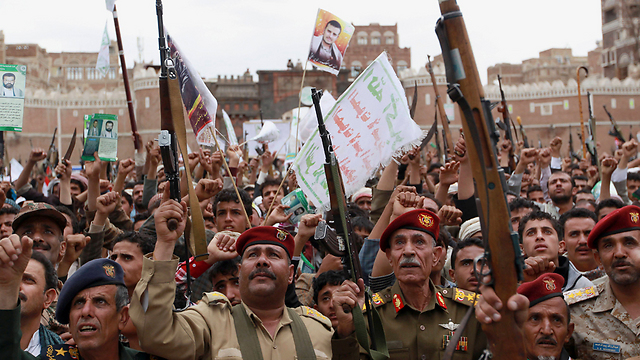 President Hadi, meanwhile, has gone underground. "He is in a secure location and is monitoring the military operation," his spokeswoman declared. And a status on the president's Facebook page reads: "We are currently taking measures to restore internal stability to our country. We will fly the flag of Yemen and not the Iranian flag over our homeland."

The situation in Yemen took a turn for the worse some two months ago, when the Houthis, a Shiite opposition group founded in 1992 by Iran, managed to seize control of the capital, Sana'a. President Hadi and his prime minister, Khaled Bahah, were forced to announce their resignations. The Yemeni parliament rejected the resignations in an effort to preserve the government institutions, but Hadi insisted, and the government and parliament were dissolved.

With the Houthis not satisfied with the president's resignation and threatening to assassinate him, Hadi got the message and went into hiding. "If you force me to stay in my position, he told the commanders of the Yemeni military, "the terrorists will get to me and eliminate me."

The Houthis then took control of the presidential palace in Sana'a, and their commander, Abdul Malik al-Houthi, declared: "We are staying here to conduct the fight against al-Qaeda in Yemen."

Al-Houthi deliberately failed to make mention of the president-in-hiding and the collapse of the institutions of power: For him, the excuse was and remains the Sunni terrorist organization, which has set up an affiliate group in Yemen. On his way to shake the regime in Saudi Arabia, he has to block the terrorists.

While making efforts to enlist the help of his neighbors in the Gulf, Hadi has also appealed to the UN Security Council in New York, asking that it declare Yemen a no-fly zone and thus put an end to Iran's supply by air of weapons, military equipment and thousands of instructors and fighters to the rebel forces.

The UN secretary-general is "checking" and "considering," and is definitely "concerned" – but he has yet to call a special session to discuss the grave ramifications of the situation in Yemen. And the United States, too, hasn't helped much at all. After Washington "forgot" to add Iran's name to the annual list of countries that sponsor terrorism, it is in no hurry to send force to Yemen. "We won't participate in the operation, but we will provide assistance," the White House announced on Thursday.

The Gulf States know by now not to rely on the Obama administration: Washington is engrossed up to its neck in fine tuning the nuclear deal with Iran; and as far as the US administration is concerned, Yemen can go ahead and sink deeper into a bloody conflict. Last week, after the attacks at the mosques in Sana'a that killed 137 people, the United States withdrew its 125 advisers who had been living in Yemen for years as "training instructors," but were actually involved in gathering intelligence on irregular movements in the Gulf.

President Hadi, the Pentagon's protégé, got the message. He internalized the fact that if Yemen doesn't enlist the help of its neighbors in the Gulf, Iran will continue to make progress towards its ultimate goal – regime change in Saudi Arabia.

From the perspective of the West, Yemen has always been a remote and uninteresting country. It is the poorest country in the Arab world, with a primitive economy, massive unemployment and a very high level (60 percent) of illiteracy. Of the 27 million citizens, two-thirds are Sunni Muslims and one-third are Shiite.

"The ayatollahs of Iran seek to take control of the Strait of Bab el-Mandeb so they can determine who can cross the Red Sea to the Suez Canal," says Dr. Yasser bin Hilal, a political science lecturer at the University of Sana'a, who traveled to Washington in an attempt to shake up the administration and the intelligence agencies. 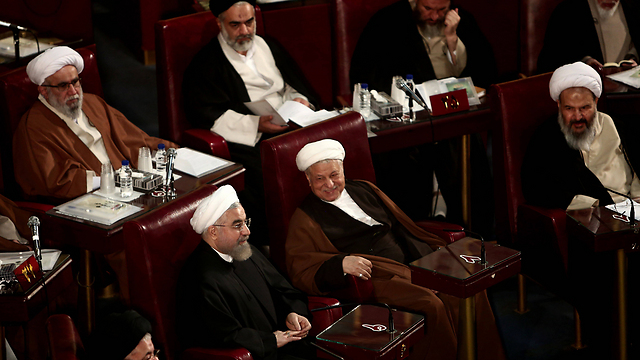 "If they are successful, it will also affect the movement of ships sailing with goods from the Far East to the port of Ashdod in Israel. Try to picture the nightmare scenario – fighters in the uniforms of the Revolutionary Guards directing maritime traffic, boarding cargo ships, checking the cargoes and crew, and blocking passage to anything that doesn't serve their interests."

For its part, Saudi Arabia is issuing statements that could have been written in Jerusalem. "Iran is an aggressive state that is intervening and operating forces in the Arab world," Saudi Foreign Minister Saud al-Faisal said this week at a joint press conference with his British counterpart, Philip Hammond. "Its nuclear weapons are a threat to the Gulf and the entire world."

He then went on to convey a message to the Obama administration, saying: "Striking a deal that Iran doesn't deserve is not right. Think, too, about the dangerous ramifications of the Iranians' 'second plan.'"

This "second plan", about which Israeli intelligence officials have been warning for the past five years, involves Iran's desire for Shiite control over the Arab world, with the ultimate objective being control over the Muslim holy sites in Saudi Arabia.

"We're dealing with two parallel courses of action," says influential Saudi media pundit Jamal Khashoggi. "If they halt the nuclear program by means of military force or a diplomatic move, as the Americans a currently trying to do, the Iranians will still be left with the threatening alternative of 'creeping progress' on the ground, throughout the Arab world.

"They are goal-oriented. They have a map of objectives to achieve on the road to Saudi Arabia."