US: Time for Iran to make tough decisions in nuclear talks

Senior US official says next days will show whether Iran is ready to make necessary hard decisions as deadline for nuclear deal approaches.

Negotiations between six world powers and Iran over its nuclear program have been "tough and very serious" and the next few days will show whether Tehran is ready to make the necessary hard decisions, a senior US official said on Friday.

Iranian President Hassan Rouhani's move to reach out to the leaders of the six powers on Thursday is "hopefully a sign that Iran is ready to make some of the tough decisions," the senior State Department official added on condition of anonymity.

The official said that other foreign ministers from the six-power group, which includes Britain, China, France, Germany, Russia as well as the United States, will arrive in the coming days to join the talks in Lausanne, Switzerland ahead of an end-March deadline for a political framework agreement. 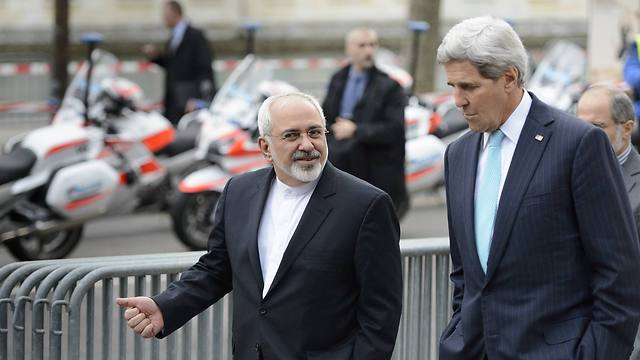 Kerry speaks with Zarif as they walk in Geneva ahead of talks (Photo: AP)
Tehran and the powers are struggling to hammer out a political framework accord by the end of this month that would lay the foundations for a full settlement by June 30. "The difficulty is that the Iranians are not moving enough. They like to negotiate right up to the precipice and they're very good at that," a Western diplomat said. Under a final accord, Tehran would halt sensitive nuclear work for at least a decade and in exchange, international financial and oil and some UN sanctions on Iran would be lifted. This would aim to end Iran's 12-year nuclear standoff with the West and reduce the risk of war in the Middle East. Initial easing of UN Security Council sanctions could include "gestures" such as removal of individuals and entities from a travel-ban and asset-freeze blacklist and little more, a Western diplomat said, adding Tehran needed to move much further to allow a deal to be made in the coming days. He said the UN arms embargo on Iran would not be lifted in the initial phase after any Iran deal, adding that such a move would be unwise given the volatile situation in the region. While all sides agree they are moving closer to a deal, there are major disagreements. Tehran insists on the freedom to continue research on advanced centrifuges, machines that purify uranium for use in nuclear power plants or, if very highly enriched, in weapons, at the underground Fordow site, and immediate lifting of all UN sanctions and the most severe US and European Union sanctions. "There has been massive progress on all the issues," a senior Iranian official told Reuters. "There are still disputes over two issues – R&D (research and development) and UN sanctions." A Western official close to the talks confirmed that centrifuge research and enrichment in general remained the most difficult unresolved issue. The foreign minister of France, which negotiators say has demanded the most stringent limits on future Iranian nuclear activity if it is to support a deal, made clear there was more work to do while playing down the importance of the deadline. "The important thing is the content not the deadline," Foreign Minister Laurent Fabius told reporters at the United Nations in New York. "There has been some progress, but there are things which are not yet solved." Fabius is due to arrive in Lausanne on Saturday. His British and Russian counterparts will join the talks over the weekend. The Republican-led U.S. Congress has threatened to impose new U.S. sanctions on Iran if there is no March deal, although President Barack Obama has threatened to veto any such moves.

The United States and European partners are reluctant to allow Iran to operate centrifuges at the Fordow site, Western officials said, adding that the issue was unresolved.

An Iranian government website said in November that Washington could let Iran keep some 6,000 early-generation centrifuges, down from nearly 10,000 now in operation. After meeting US Secretary of State John Kerry on Friday, Iranian Foreign Minister Mohammad Javad Zarif told reporters that it was unclear if there would be a deal in the coming days. "We think an agreement is still possible but when is another story," Zarif said. Rouhani spoke with his French, Russian, British and Chinese counterparts on Thursday in an attempt to break the impasse. He also sent a letter to the leaders of all six powers, including Obama, though officials said the letter did not suggest Tehran was ready to compromise. When asked about French President Francois Hollande's conversation with Rouhani, Fabius said the Iranian president was "not very precise" regarding the nuclear negotiations. Western officials said the main problem remains Tehran's refusal to offer serious concessions. Iranian say the same thing about the six. If there is a political framework agreement in the coming days, the US and European delegations want it to be as specific as possible, including figures for permissible numbers of centrifuges Tehran could operate, uranium stockpiles and other sensitive technical issues. Further technical details would be included in annexes to be agreed before July 1. The six powers want limits on the most sensitive aspects of Iran's nuclear programme to be in place for at least a decade followed by years of intrusive U.N. inspections.

They also want to be certain Tehran would need at least one year to produce enough high enriched uranium for a weapon should the Iranians decide to produce one. Iran denies having any nuclear weapons ambitions.