The judicial system worries a contrarian justice minister would not only fail to protect it from initiatives seeking to limit the court's power, but actually lead the charge, with potential coalition partners already preparing several bill proposals in that vein, including the nationality bill.

Coalition talks are still in their early stages, but the judicial system is already concerned at the possibility of the formation of an unbalanced right-wing government that could lead legislation against the law enforcement system, with no one to protect it. This concern is not unfounded. Throughout Israel's short history, right-wing elements have been trying to hurt the judicial system's independence, change the judicial selection process and restrain the Supreme Court, among other things. These attempts varied, from a bill proposal for a constitutional court, to the nationality bill proposal, but the goal was always the same: Limiting the Supreme Court's power. 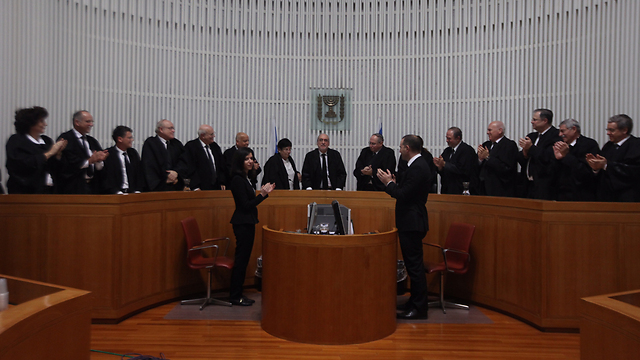 Justice Miriam Naor replacing Asher Grunis as Supreme Court President (Photo: Gil Yohanan)
There are already voices in the upcoming government who are calling for an overhaul of judicial system. In previous governments, there were always those who worked to stop such plans - including Dan Meridor, Benny Begin and the last justice minister, Tzipi Livni. Even Prime Minister Benjamin Netanyahu understood the limits of his power and did not push for reforms that would limit the court. In fact, one of the lessons Netanyahu learned from all of the legal affairs he has been involved in so far was that it wasn't a good idea to "anger" the judicial system too much. That is why he appointed Yehuda Weinstein as the attorney general, so he could also serve as Netanyahu's close legal advisor. Weinstein had indeed warned Netanyahu quite a few times of constitutional violations that would not pass, and has worked to stop such dangerous initiatives. But Meridor is no longer around and Livni will remain in the opposition. Benny Begin might have returned, but with the right-wing government that taking shape, it is unclear how much of a moderating influence he will be. The judicial system is concerned over the potential appointment of a contrarian justice minister, who would not only fail to protect the system from proposals that could limit the Supreme Court's power, but would actually lead such initiatives. The potential coalition partners already have several such initiatives ready to go: Likud MK Yariv Levin's proposal to change the judicial selection system; Bayit Yehudi MK Ayelet Shaked's proposal to allow the Knesset to pass anew a law rejected by the Supreme Court; Likud MK Danny Danon's proposal to limit the ability to petition the Supreme Court; and of course, the nationality bill proposal and the initiative to create a constitutional court that could always be revived. The judicial system is also concerned that a contrarian justice minister might not cooperate with Supreme Court President Miriam Naor in consultations on stopping limiting legislation or on anything to do with the Judicial Selection Committee, using the separation of powers as an excuse. One of the important legal challenges the fourth Netanyahu government will face will be the appointment of Weinstein's replacement as attorney general, as he is due to retire in ten months. Since the attorney general (whose term is six years) is not chosen by law but by a government decision, Netanyahu might try to extend Weinstein's term by a year. If he doesn't, a committee will be formed in the coming months, led by a former Supreme Court justice, to select the next attorney general. Even though the committee is theoretically independent, the government's representatives hold a lot of sway over it. So, for example, the justice minister, working alongside the prime minister, is the one who will choose the nominees for the role, even though it is seemingly an "open race." The only one who might be slightly less concerned at the moment is State Comptroller Yosef Shapira, who already had his big confrontation with the prime minister before the elections - and won. Shapira released his reports on spending at the Prime Minister's Residence and the housing crisis, while maintaining his independence and withstanding the pressure put on him from Netanyahu's allies. It is believed he will continue to do so under the new government as well.