Israel unveils largest solar project by any parliament in the world, the latest in a series of green measures; Edelstein: Jewish law teaches us to be responsible for the environment.

With nearly 50 years of history behind Israel’s parliament building, the classical stone structure has seen countless historical changes and events. But a new kind of revolution is making its way through the halls of the Israeli parliament with the “Green Knesset Project,” a unique environmentally friendly initiative spearheaded by lawmakers from the right and left of Israel’s political spectrum.

On Sunday, the largest solar field in any parliament in the world was unveiled as one of the major highlights of the Green Knesset Project, undertaken by the 19th Knesset over one year ago. The solar field contains 4.65 dunams of solar panels, which have been installed on the roofs of the Knesset.

While the Knesset is not the only parliament to have undertaken such an energy sustainability initiative - the second largest solar field is located on the roof of the German parliament, the Bundestag, followed by the Australian parliament - it is by far the largest.

“I am proud that the Knesset has become a model for the world on this matter,” says Knesset Speaker Yuli Edlestein of the Likud.

“Our green environment measures go back to the Bible, when God commanded Adam to take care of the Garden of Eden,” points out Edelstein at the unveiling ceremony Sunday. “Jewish law teaches us to be sensitive and responsible for the environment around us – not to waste or destroy needlessly.” 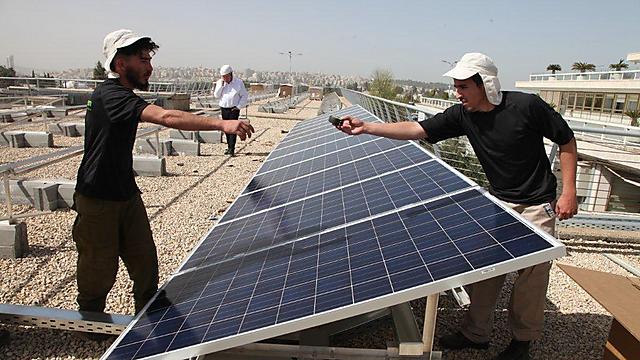 MK Dov Khenin of Hadash, former MK Zevulun Khalfa of Bayit Yehudi and former MK Nitzan Horowitz of Meretz worked together with Edelstein, who initiated the flagship program and Ronen Plot, the director general of the Knesset who implemented details of it. Ecologist Dr. Samuel Chayen serves as the sustainability coordinator of the Green Knesset Project.

“This is a realization of what started as a dream,” says Khenin. “Our Knesset now serves as an example of progressive green friendly government environments to parliaments around the world.”

The first phase of the Green Knesset Project has mainly addressed paper, electricity and water waste as well as energy conservation.

“Can you imagine how much paper is used in the Knesset? We decided that we would use paper that is recycled, only print double-sided, and use tablets,” Knesset Director-General Ronen Plot says. “Now each MK gets an iPad where all the legislation material is placed.”

Online queries to parliamentarians are sent instead of hard copies as well, and together the efforts save the Knesset around 40,000-50,000 sheets of paper each year.

In addition, Knesset members, who once consumed some 60,000 bottles of mineral water each year will now use water served in pitchers at committee hearings, saving the Knesset NIS 500,000 per year and reducing the volume of plastic waste. 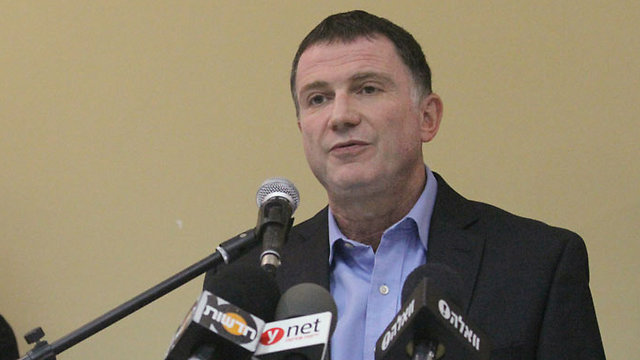 Yuli Edelstein: The Knesset has become a model for the world (Photo: Ido Erez/Archive)

Knesset cafeterias will also separate regular waste from organic waste, which will be sent to a compost station in the Jordan Valley, to be reused potentially in the Knesset gardens.

The Knesset is now also utilizing automatic shutdown of lighting and air conditioning in empty rooms in Knesset buildings and has installed cost-effective LED lighting in the historic wing of the Knesset building, which saves up to 60% of energy consumption compared to florescent lighting.

During the month of March, some 1,500 photovoltaic panels have been installed upon Knesset roofs. The panels produce 450 KW of energy that will yield about 10% of electricity of the Knesset. In addition to this and other to other energy efficiency measures, the Knesset is expected to reduce a third of its energy consumption by the end of 2015 at the cost of NIS 7 million ($1.7 million). By the end of five years, it is expected that the money will go back into the Knesset budget.

"We demonstrate that sustainability is an economic approach and that it is vital for the survival of society in the long-term," says Plot.

Dr. Chayen, who himself built a sustainable "green" home for himself and his family, says that the green Knesset sparked interest from other governments around the world.

“We have heard from parliaments both in Africa and Europe, who are interested in implementing and cooperating with the Green Knesset Project,” Dr. Chayen says.

“We have a number of international agreements of cooperation in green research signed with the parliaments of Ethiopia, Kenya, Uganda, Albania and Romania,” he adds.

“We promised and we came through – we are making the Knesset the greenest in the world. The second phase of the project as it is planned now will expand to other fields,” says Plot.