Place a Pesach note in the Western Wall with Ynet

Ahead of Jewish holiday, Ynet and Western Wall Heritage Foundation offer worshippers an opportunity to send prayer notes to be tucked between holy stones at Western Wall.

For centuries, Jews from around the world have been placing handwritten notes between the ancient stones of the Western Wall in Jerusalem.

Ahead of the Passover holiday, Ynet and the Western Wall Heritage Foundation offer worshippers the opportunity to send prayers directly to the wall from their computers or smartphones. The prayer note will later be printed out and inserted in the crevices of the old Wall – a remnant of the biblical Jewish Temple complex.

The rabbi of the Western Wall, Rabbi Shmuel Rabinowitz said: "Today, millions of visitors come to the Western Wall every year, both Jews and non-Jews. Tens of thousands of B'nai Mitzvah children celebrate with their families, soldiers swear allegiance to the country and individuals from all over the world make the pilgrimage to the site. 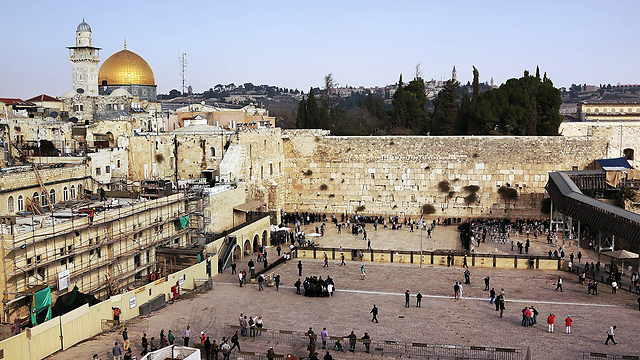 "There is no substitute for prayers at the Western Wall, but for those who cannot make it,

from Israel and abroad – their prayer notes, whose origin is from the Holy Light of Life, have great value."

Rabbi Rabinowitz added: "The Western Wall Heritage Foundation in collaboration with Ynet will insert the prayer notes in the Wall and we will all pray for the fulfillment of everyone's prayers, and wish the whole house of Israel a happy and Kosher Passover."