The Iranians are praying for an agreement

Orly Azoulay finds herself watching Netanyahu's Congress speech from the lobby of an Iranian hotel, and encounters a country desperate for a deal that will free it from crippling sanctions.

The minute or two during which the passport control official at Tehran's Imam Khomeini International Airport scrutinized my foreign passport felt like an eternity. He didn't look me in the eye; he didn't smile; and he didn't say what he was looking for. And then he suddenly stood up and walked over to consult with a second official at another counter.

A further two officials soon joined the group. One of them approached me and asked if I was born in Israel. I nodded. I couldn't deny it; it says so in my passport. I tightened the hijab covering my hair so as not to give him any reason to arrest me.

The centrifuges in my mind kept spinning, enriching the fears and prejudices I brought from home to the highest level. I thought about Jason Rezaian, the Washington Post correspondent who was arrested in Iran some four months ago and hasn't been seen or heard of since. Several more minutes went by, and then the official ushered me into a nearby room to be fingerprinted. 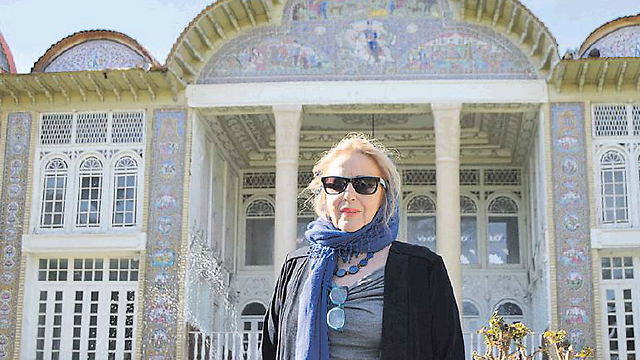 A young stern-faced woman pressed my hands firmly onto the ink pad – first my right hand, then the left, and then both together. A few minutes later, one of the officials returned with my passport in hand. He handed it to me and spoke three words in English: "You can go."

Thus began my visit to Iran – 14 days and nights in Tehran and Shiraz, Isfahan and Persepolis, the ancient capital of the Persian Empire; a 5,600 kilometer journey through the land of the ayatollahs and centrifuges, a country whose people eagerly await an agreement to rescue them from the stifling sanctions.

We arrived in the city of Hamadan, the burial place of Queen Esther and Mordechai, in the evening. Hanging above the reception desk of the small motel at which we were staying was an American flag – a rare sight in a country where Stars and Stripes are still set ablaze at demonstrations.

After taking my suitcase up to my room, I went back down to the lobby and couldn't believe my eyes: There on the giant TV screen, in front of framed photographs of Ayatollah Khomeini and Supreme Leader Ali Khamenei, was the face of the Israeli prime minister.

Iran's English-language television network, Press TV, was carrying a live broadcast of Benjamin Netanyahu's address to the US Congress; and out of all the places in the world, I found myself watching him from the lobby of an Iranian hotel, on the road between Tehran and Baghdad.

Dozens of Iranians were standing in the lobby and watching the speech. And they didn't like what they were hearing.

"After a speech like that, Iran should go all out to achieve the nuclear capabilities it desires," one of our local escorts said to me, his face red with anger. "It was an insulting and degrading speech. I was ashamed to listen to it. That prime minister would be willing to send planes to bomb all of us here. It's good that President Obama doesn't listen to his advice."

The following morning, I came across a satirical magazine at a newsstand. A large picture of Netanyahu adorned its front page. In his one hand, Netanyahu was holding an Angry Bird; a cartoon image of King Kong appeared to be coming out his head; and the caption below in Farsi read: "Nothing scares him more than peace." 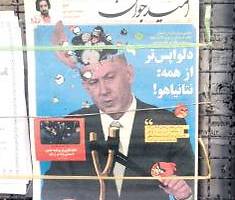 A little later, at the café of the Laleh Hotel in the Iranian capital, a waiter handed me a copy of the Tehran Times, the local English-language newspaper owned by associates of Supreme Leader Khamenei. The huge picture on the front page showed a man brandishing a banner in protest against Netanyahu's address in Washington.

Displayed on the banner was a computer-enhanced image of the Israeli prime minister with blood-stained hands. And the paper's op-eds were filled with glee and gloating: "Netanyahu's speech destroyed Israel's special relationship with the United States."

But despite the venom and hatred, one should also read between the lines – no longer "the Zionist entity," but the State of Israel. Nuances. And the newspapers tell the Iranians that when the agreement is signed, most of the sanctions will be lifted.

"Obama is strangling us," said one man I met in Tehran, near a kebab restaurant. He saw me with a box of Marlboro and asked for a cigarette. When I gave him one, he ran his fingers over it longingly and told me he hadn't seen an American cigarette in years. I gave him the box.

"I have four children," he said. "I want to give them a good education, but the sanctions have killed us. It's impossible to save money, the prices are sky high, and wages are only $50 a month. I'm not only hoping for an agreement; I'm praying for one."