Israel denounced as hypocritical Wednesday the Palestinian decision to join the International Criminal Court in order to seek to prosecute officials from the Jewish state, claiming the court had erred in agreeing to accept them.

"The Palestinian decision to join the ICC to initiate judicial proceedings against Israel is political, cynical and hypocritical," the foreign ministry said in a statement. 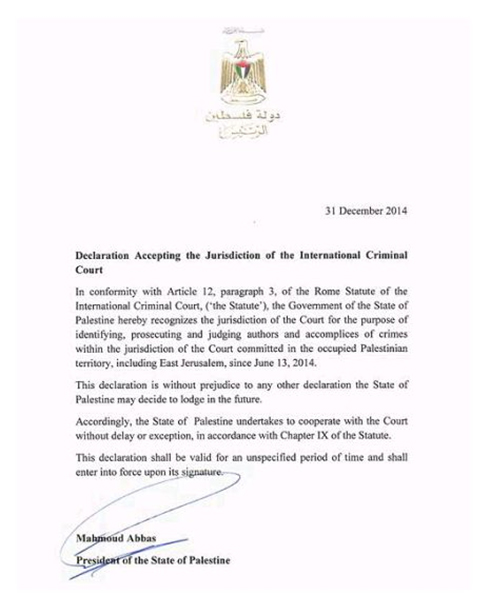 Palestine formally joined the ICC Wednesday in a closed-door ceremony at the court's headquarters in The Hague. However, Israel claimed the court was in the wrong for accepting the Palesotinians as a member and agreeing to an initial probe into alleged war crimes in Gaza.

"Israel's position, like that of other nations like the US and Canada, is that the Palestinians are not entitled to join the ICC, and that the court does not have the authority to accept them, first and foremost because a Palestinian state is not recognized according to international law," the foreign ministry said.

Israel further slammed the Palestinians, saying that "The government of the Palestinian Authority, which is associated with the deadly terrorist Hamas committing war crimes... is the last to be able to threaten legal action" before the court. Unilateral Palestinian actions such as joining the ICC are "violations of the principles established between the two parties with the support of the international community to resolve the Israeli-Palestinian conflict," it added. The Palestinians officially joined the International Criminal Court at The Hague on Wednesday, a move initiated by Palestinian President Mahmoud Abbas after the failure of the US-brokered peace talks last year.  Palestinian Foreign Minister Riyad al-Maliki was meeting with court officials Wednesday, in a move that was largely ceremonial. Senior Palestinian official Saeb Erekat said Monday that the ICC had already begun a preliminary examination of alleged Israeli crimes.

“The legal and technical committees have been extensively working on finalizing the two files,” Erekat was quoted as saying. “We will conduct all practical moves directly after Palestine is officially declared an ICC member on Wednesday.”

At the end of last year, the Palestinians accepted the court's jurisdiction dating back to June 2014, to ensure that last summer's Gaza war between Israel and the militant group Hamas will be included in any review.