Mechina graduate: "I feel like the program brought me closer to achieving my goals"
צילום: דובר צה"ל

Twenty pre-army students participating in the Tavor mechina were educated upon values of Israeli, Jewish and Zionist legacy for several months – the results – 14 were accepted into elite IDF units.

The efforts of the Tavor pre-army "mechina" (preparatory) program have borne fruit: Out of the 20 students who completed the last cycle of the program, four have been accepted into IDF's Air Force flight school, two made it into Shayetet (the Navy Seals) three have been accepted into Sayeret Matkal (a special operations unit), two (including one woman) made it into an elite intelligence unit, and one got into the naval academy.

The mechina was established in 2012 by Amichai Shikli, who is also the program's director, and has become one of the most popular pre-army programs among the 40 registered programs throughout the country. Several dozens of high school students, both boys and girls, are enrolled in each cycle. The demand is extremely high, and the acceptance tests include group interviews (60 percent of candidates are dismissed at this stage) theoretical tests and field navigation.

"We choose the candidates mostly according to three parameters – optimism, excellence and leadership skills," Shikli says.

However, Shikli explains, while the students accepted to the pre-army program are intelligent and posses a high level of skills, when it comes to their knowledge of the Israeli, Jewish and Zionist legacy, their education is practically non-existent. The mechina director believes that educating the students in values in these fields has paved their way to elite units in the army. 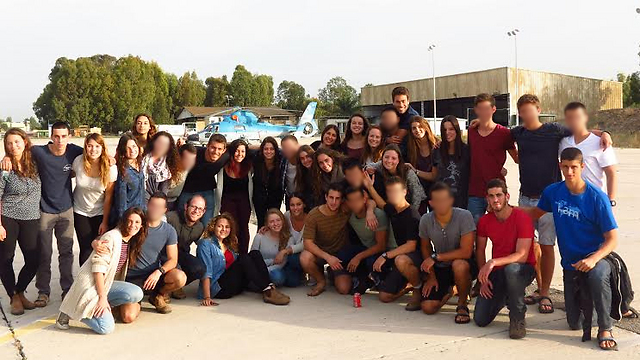 Shikli, who is himself a graduate of a pre-army training program, served as a company commander in the Egoz unit.

"During my service, I studied at the Tactical Command College for two years," he says. "I found one of the courses very boring and started sketching out my own ideas for establishing a military preparatory program after my release."

After several years, Shikli's ideas turned into reality: During his studies in the university following his release, he learned from his former mechina instructor Erez Eshel that the Nazareth Illit municipality was planning on establishing a military preparatory program. The program came into being and he was appointed as its director.

The Tavor program lasts ten months, from September to June, and costs each student NIS 10,000. The program includes theoretical studies, during which the students are exposed to the burning issues on the agenda in Israel, and learn about security, society, economy, religion and the country. A large portion is devoted to Jewish and Zionist identity.

The pre-army program hosts visiting professors and former Shin Bet chiefs, as well as key figures in the communications industry in Israel. The students also partake in social activities, such as providing educational programs for younger teens.

While the emphasis on discipline is not as draconian as it is in basic training or military training courses, it is certainly demanding, including early wake-up calls, 10-kilometer morning runs, lessons in martial arts for the male students, navigation and survival exercises, as well as journeys to get to know the country firsthand.

However, Shikli notes, the emphasis in the preparatory studies is placed on the theoretical and moral foundations and focuses less on the physical aspect.

The mechina director says he is not surprised by the impressive results achieved by the students, and spells out the formula for success: "When a feeling of national mission is combined with personal ambition – the chances of getting into high-quality places in the IDF are higher."

Shikli adds that he would rather the graduates "serve as commanders in 'regular' combat units than fighters in elite units".

And what do the graduates have to say on their experience? Ronel, 19, from a community in the Sharon region, who was accepted to the Navy Seals, says: "I feel like the mechina brought me closer to achieving my goals. I am familiar with the other guys (students of the mechina) so I am not surprised by their achievements."

His friend Dotan, 19, who is also from a community in the Sharon region, and also made it into the Navy Seals, said: "I would recommend every teenager to come here."