Netanyahu: 'Iran's breakout time from start of deal will be near zero'

Prime Minister Netanyahu takes advantage of President Obama's 'muddled' comments about Iran's breakout capability during trip to southern Israel; emphasizes that Iran will have the ability to create nuclear bomb from inception of deal and not 13 years on as Obama said.

Prime Minister Benjamin Netanyahu took advantage of President Obama's "muddled" comments Tuesday and said Wednesday that he agreed with the president's statement that Iran would have a near zero breakout time – but unlike Obama, Netanyahu said that the minimal breakout time to create the bomb would happen from the moment of the deal's inception. Netanyahu made the comments while on a Passover holiday trip to the south with his wife and two sons. "Israel shares the view that from the beginning of the nuclear deal with Iran the break out time for Iran to achieve a nuclear weapon will be near zero," said Netanyahu. 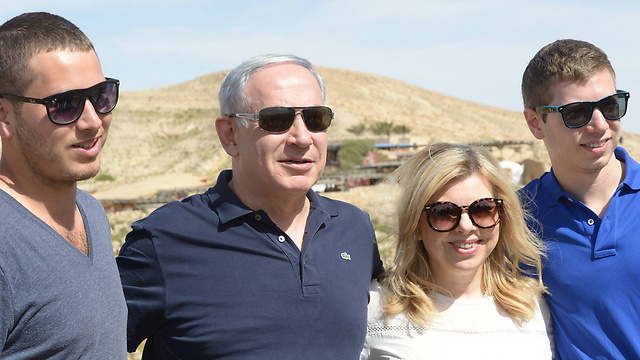 Netanyahu and family on trip to southern Israel. (Photo: Amos Ben Gershom / GPO)
According to Netanyahu the deal would be "the inevitable result of the automatic removal of restrictions, something that would enable Iran to gain an industrial-scale production capacity."

In an interview with NPR on Tuesday, President Obama tried to sell the nuclear deal with Iran but his comments on Iran's breakout capacity towards the end of the deal turned heads and the White House later scrambled to clarify his comments.

Harf later told a daily briefing that Obama’s comments “were a little mixed up” and “a little muddled,” and that he was "referring to a scenario in which there was no deal". 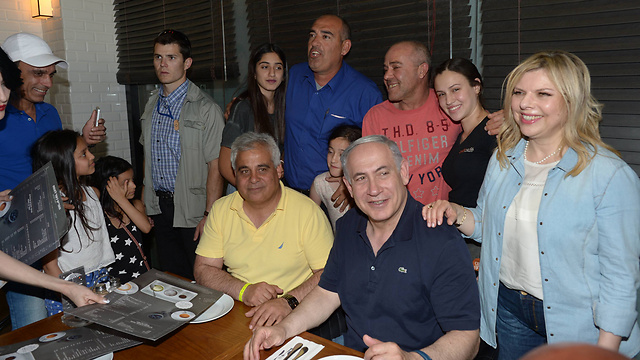 Netanyahu took the opportunity to piggy-back on Obama's apparent mistake while on a trip to the south with his wife and two sons.

“My family and I toured the beautiful landscapes of our country today, like many families in Israel.

"We visited Mamshit, an ancient city in the Negev, where we saw it in all its ancient glory, as well as its promising future, when we were later warmly received in Beersheba and Dimona," Netanyahu wrote on his official Facebook page.

Netanyahu made sure to caution Israelis to drive safely so that "the holiday remains a happy one."

The Prime Minister also responded to the stabbing attack that took place Wednesday morning in the West Bank and said: "In the name of all of us I wish to thank IDF soldiers, Border Police officers, security personnel and police, who keep us safe every day – this day too. I wish a speedy recovery for our wounded soldiers who acted with determination and courage to foil the terror attack.”