Shelter for refugees and asylum seekers set ablaze in small town where mayor resigned last month in the face of far-right death threats.

The sleepy town of Troeglitz in eastern Germnay had planned to welcome foreign refugees and asylum-seekers to a newly-renovated shelter.

But an arson attack by suspected neo-Nazis destroyed much of the building - and placed Troeglitz in the frontline of a conflict as right-wing groups renew anti-immigrant protests.

The blaze last Saturday was not the first attack on a refugee shelter in Germany but it shocked a nation that has received a surge of refugees in the last few years -- 200,000 in 2014 and a further 85,000 in the first quarter of 2015 alone. 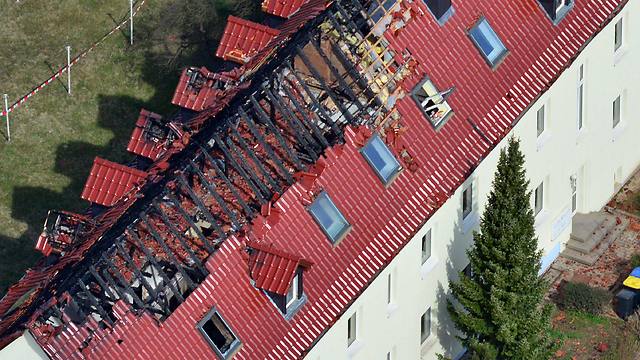 An aerial view of the house with a burned-out roof truss in Troeglitz, Germany (Photo: EPA)
A state police spokesman said they were still investigating the fire that gutted the top floor of the three-storey building, but they believe it was a started deliberately. On Thursday they started interviewing residents in a house-to-house campaign.

Troeglitz, a town of 2,700 people about 240 km south of Berlin, has a dark past as the site of a forced labor complex linked to the Buchenwald concentration camp in World War Two. 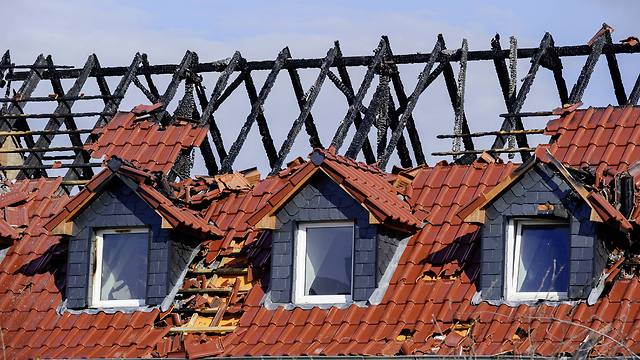 A facility for housing refugees, which was destroyed by an arson attack, in Troeglitz, Germany (Photo: Getty Images)

Residents are unhappy that it has been branded as a right-wing hotspot.

"It's just disgusting that everyone's now trying to paint our town brown," said Rainer Lammert, a truck driver, referring to the Nazi colors.

"It was over the top whoever set the building on fire but it's the government's fault for not informing us sooner about their plans to put a shelter here."

Lammert has taken part in anti-Islam rallies organized by the grassroots movement PEGIDA, or Patriotic Europeans Against the Islamization of the West, in Dresden, 150 km to the east.

The rallies have faded in recent months but some 30,000 are expected in Dresden on Monday when Dutch far-right populist Geert Wilders is due to address marchers.

Other residents were more outraged.

"It's a disgrace what happened here," said Viola Staube, 57, who works for a local mining company.

She said several people in Troeglitz have now said they want to take in small groups of refugees into their own homes.

"I hope that the refugees do come here and stay with families – that will give the world a different image of Troeglitz," she said. 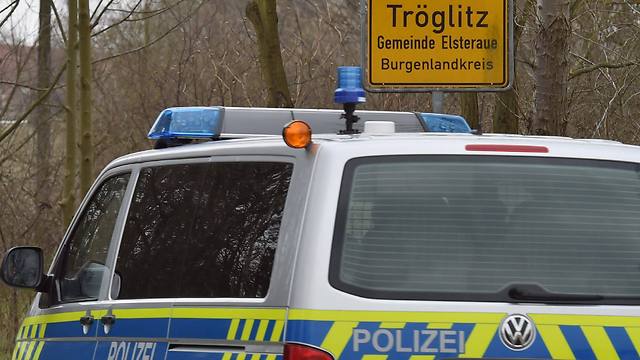 But Troeglitz had already been in the headlines.

A month ago, its mayor Markus Nierth, who had been working with state authorities to set up the refugee shelter, resigned in the face of far-right death threats.

"We ended up becoming a target for a small group of people in town who were steered by a larger group of right-wing extremists and NPD supporters from elsewhere," said Nierth, mayor, referring to the far-right National Democratic Party.

No NPD official was available for comment but an article on its website distanced the party from the arson attack and criticized the media for linking the fire to weekly rallies that the NPD has been part of in Troeglitz.

"Obviously it can only have been a mentally deprived fool who views his arson attack as an heroic political act," it said.

German TV network MDR reported on Friday that there have been at least 12 similar sabotage attacks since March 2014 in Germany on buildings that were planned to be used by refugees.

"Anyone who sets fire to a refugee shelter is acting cowardly and despicably," German Justice Minister Heiko Maas said.

"What a shameful act in Troeglitz. We've got to stand together against the right-wing agitators," he said.

The German government and industry say that immigrants are badly needed to counter a looming demographic crunch that experts estimate could slash the country's working-age population by over 6 million over the next decade-and-a-half.

In poorer areas like these, fears of competition from refugees for state resources run high. There are also worries that religious or political militancy could take root.

"The people are afraid that those are the kinds of people who will end up here in the shelter."