Chairman of Zionist Union responds to rumors Saturday he is eyeing unity government and says he will stand by his word and not join Netanyahu government.

Chairman of the Zionist Union party Isaac Herzog reiterated his intentions to join the opposition on Saturday as negotiations to form the next government were still underway. "Right after the elections I said we were heading toward the opposition. It is not a default. It is a priority," said Herzog during a cultural event at Tel Aviv's Habima Theatre. During the event, Herzog said that Netanyahu would form a government consisting of 67 right-wing MKs. 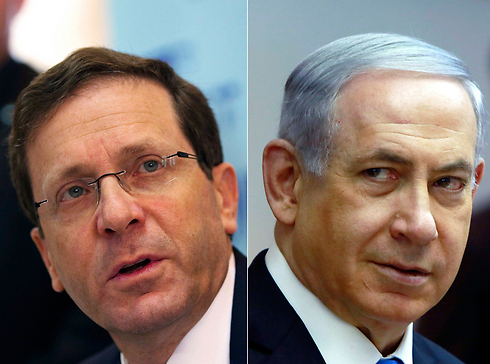 "I think he had to decide and he prefers, because of his worries and fears, a right-wing government."

When asked if he would join the government, Herzog responded: "I do not conduct hypothetical negotiations. I was careful not to say things that I would later not stand by. Right after the elections I said that we are going to the opposition." Tzipi Livni, who initially had a rotation deal with Herzog that was abandoned a day before the election, also weighed in on the formation of the next government at an event in north Tel Aviv on Saturday. "Herzog said that we would be a fighting opposition and all the rest is spin," said Livni referring to rumors that the Zionist Union would form a unity government with Netanyahu's Likud. "Netanyahu said there is a great difference between us and he is right," said Livni. When asked whether Herzog and Netanyahu met privately, Livni said she believes Herzog when he says that he has not held any private meetings with the prime minister. "If it quacks like a duck, sounds like a duck and looks like a duck, it is a right-wing government of 67 MKs. That is where it's going," said Livni. When asked if he thought Kulanu leader Moshe Kahlon was disappointed with the election results, Herzog responded: "You would have to ask him. I am in good relations with him." "He would have felt a sense of trust in a partnership with me," said Herzog hinting at the muddy ties between Kahlon and Netanyahu. Kahlon had split from the Likud to form Kulanu with claims that the Likud had abandoned its concerns with social issues. Herzog repeated his criticism of Netanyahu's handling of everything related to Iran. According to Herzog, he is not willing to continue hearing that Israel is close to complete annihilation every Holocaust Remembrance Day. "The Iranian threat is dangerous, but we must build the country, strengthen ourselves and not say that Israel is going to be a passing episode at Yad Vashem and continue to scare," said Herzog, blaming Netanyahu for scaring the public regarding the current deal being negotiated with Iran by the international coalition.