Singapore, a tiny heaven for Jews

These days, I am hectically working on my doctoral studies. My dissertation focuses on small Jewish communities around the world with less than 1,000 members. Ahead of every visit, I check, investigate, inquire and go through every piece of information which may assist me during my future visit to the community.

I am not ashamed to admit that when I began the initial inquiries ahead of my visit to the Jewish community of Singapore, my heart was filled with anxiety. Singapore's "don't do" list is long, terrifying and exhausting. I was particularly deterred by the enforcement and punishment: Dropping litter on the street is strictly forbidden, as is chewing gum in public. Even selling gum in grocery stores and supermarkets is highly restricted.

But all the anxieties disappeared as soon as I landed at Changi Airport on my way to mean Singapore's tiny Jewish community.

A serious crisis took place in Singapore after World War II, and few Jews remained in the country: Only 150 out of several thousands, most of them Iraqi Jews from Baghdad, who lead the community to this very day. Since then, the community has grown significantly and numbers some 1,500 men and women today (including the Israelis and Jews who arrive for a short relocation period for business purposes).

The community is mostly Orthodox, wealthy and very inviting. Slowly, over the years, the community grew and expanded thanks to people who arrived from all over the world, including several thousand Israelis who are sent to Singapore every year by their workplaces on missions or special projects. 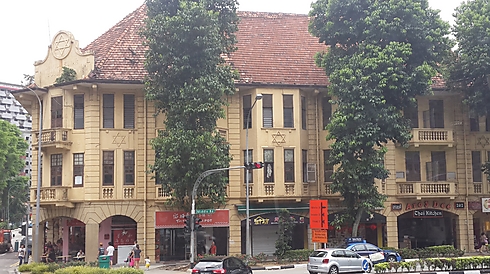 The Elias building which belongs to Singapore's rich Jews and has been well preserved by the government (Photo: Ayelet Mamo Shay)

The few Jews who remained in Singapore after the war stood out. For example, David Marshall, who was a successful Jewish lawyer and served as Singapore's first chief minister from 1955 to 1956. To this very day, on the anniversary of his death, many residents from a wide spectrum of the country's different religions pay their respects to him.

In 1965, when Singapore gained its independence and split from Malaysia, Israel was one of the few countries which helped the new republic. Singapore's residents are still grateful to Israel to this very day, and the Israelis are very popular in the country.

The highlight of the year: Lag B'Omer bonfire

The community is led by Rabbi Mordechai Abergel. I met with him in his modest office after a comprehensive security check at the entrance to the community building. He has been serving as the community rabbi since 1994, but although more than 20 years have passed, it seems that his vigor and positive energies have only increased over the years.

The rabbi is very involved in everything taking place in his community, and keeps it united by holding joint Shabbat meals and communal events during the Jewish holidays. The highlight of the year is the Lag B'Omer bonfire, which brings together 700 people. Rabbi Abergel also serves as the community's slaughterer. He slaughters the poultry himself in a bid to keep the prices low and reasonable for kashrut observing consumers. The rabbi believes that every Jewish home, wherever it is, should observe kashrut, and therefore only the cost price is charged for the chicken. The beef, on the other hand, has to be imported from Australia, so its price in Singapore is much more expensive. The rabbi is also an authorized mohel but prefers not to take any chances, so most new parents privately book a mohel from Israel for their son's circumcision ritual.

There are two active synagogues in Singapore, Chesed-El and Maghain Aboth. The latter, which was built in the early 20th century, is located in the community compound on Waterloo Street, which also includes a ritual bath for men and a ritual bath for women, a kosher store which offers a variety of products from Israel and around the world, and a banquet hall which holds weddings, bar mitzvah, anniversaries and workshops. 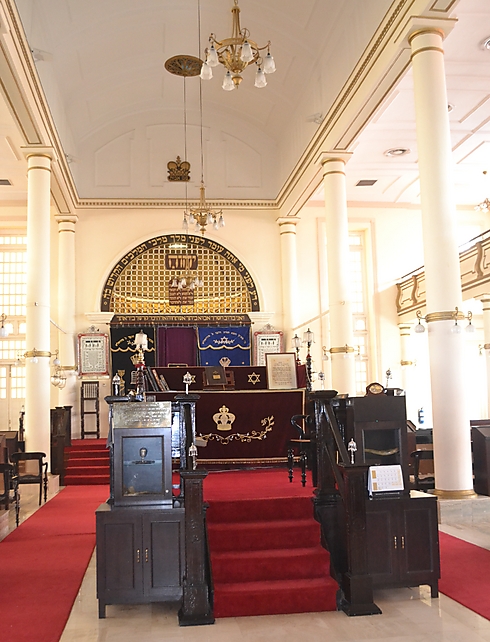 The compound also includes a kosher restaurant under Rabbi Abergel's supervision, which serves breakfast, lunch and dinner and offers Shabbat meals and catering services, and even a conference room for business people. Due to its many activities and the rapid growth in the number of community members, the government has approved the construction of another floor for the building.

The community also has a retirement home. Some 150 students from the Jewish community study in the Jewish school named after Manasseh Meyer, one of Singapore's rich Jewish residents. The Israelis prefer the international school. A new and spacious building is being constructed these days for some 500 students, from the age of preschool to high school. Its construction is expected to be completed in the coming months.

Several years ago, Rabbi Abergel and the Israeli Embassy in Singapore introduced the Sunday School, which is open to Israeli and Jewish students from 9:30 am to 12:30 pm. The curriculum focuses on Hebrew and Torah studies, Jewish holidays and tradition.

Local residents told me that the schools creates a feeling of "home" and serves as a bridge between secular and religious Jews and between the Israelis and the local Jews. The school's students may complete their studies until the matriculation exams period, according to the Israeli education system.

Menorah on the main street

Rabbi Abergel finds it very important to maintain good relations with the non-Jewish population, but clarifies that anti-Semitism does not skip a single Jew anywhere in the world, and so the Jews must be careful and watchful.

One of Singapore's advantages, he says, is the strength and dominance of the government. For example, the government won’t let anyone change a thing in the David Elias building, which was sold a long time ago and no longer belongs to Singapore's Jews. Four years ago, Rabbi Abergel says, he felt a deep desire to place a Hanukkah menorah on Singapore's main shopping street, Orchard Road. He set a meeting with one of the compound's owners, a wealthy Singapore resident. On the man's desk, the rabbi spotted three holy books: The Bible, the New Testament and the Koran. The millionaire accepted the rabbis' requests within minutes, and the menorah has been standing on Singapore's main shopping street for four years now. The rabbi is definitely busy, but he has many "little angels" who help him. One of them is Rabbi Netanel Rivni, who arrived in the community in 2006 and has been serving as Rabbi Abergel's right hand. Rabbi Rivni is in charge of a group of six yeshiva students and two Bnei Akiva emissaries, and together they organize many activities for the entire community. They are also responsible for preparing the bat and bar mitzvah kids for their big day. With such a courteous and helpful Jewish community, anyone arriving in Singapore for pleasure, business or relocation will never feel alone. "Good things come in small packages," my mother told me. Singapore's small Jewish community definitely fits this definition. Ayelet Mamo Shay is a researcher of small Jewish communities around the world and author of the book "Relocation darling, relocation!"