90 armed and uniformed officers deployed to three Arab neighborhoods in an attempt to arrest fugitives and combat the rampant trade in drugs and stolen cars.

ABU DIS - After years of Israeli objections, armed Palestinian police in dark blue uniforms have taken up positions in East Jerusalem, highlighting the shared interests of Israel and the Palestinian self-rule government on day-to-day issues even when political tensions run high.

The officers hope to catch scores of fugitive criminals and break up a rampant trade in drugs and stolen cars in three Arab areas on the outskirts of Jerusalem. The criminal activity, some in Arab-Jewish partnerships, routinely spills over into Israel, with most cars stolen there and some drugs sold in Jewish neighborhoods of Jerusalem.

"Crime has no color," said Adnan Damiri, a spokesman of the Palestinian security forces. "It can harm us and them." 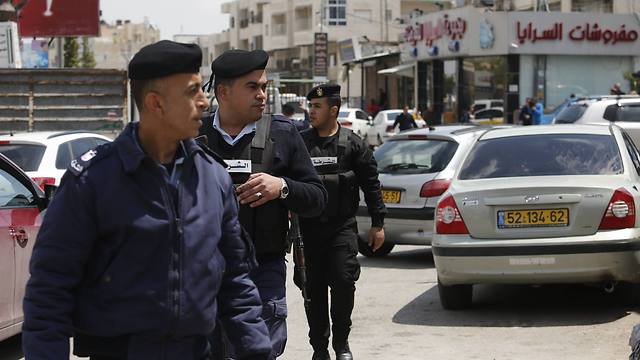 Palestinian policemen patrol Azariyeh in the West Bank (Photo: AP)
The long-running absence of regular law enforcement in Abu Dis and other Arab suburbs of Jerusalem is linked to the turbulent history of the Israeli-Palestinian conflict. As part of interim peace agreements reached in the 1990s, the West Bank was carved up into a patchwork of jurisdictions. Israel maintained overall control over the territory it captured in 1967, along with East Jerusalem and the Gaza Strip. But a Palestinian self-rule government took over 38 percent of the territory. Palestinian cities came under full autonomy, with armed Palestinian security forces operating there. Smaller towns and villages received limited self-rule, with restrictions on the deployment of Palestinian police. In communities close to East Jerusalem, sought by the Palestinians as a capital, restrictions were particularly tight, Palestinian officials say. In Abu Dis, which abuts East Jerusalem, unarmed police patrolled the streets in the 1990s, but were ordered by Israel to leave after the outbreak of an armed Palestinian uprising against Israeli military rule in 2000.

Since then, Israel only has permitted Palestinian police to return for specific needs, such as crowd control or arresting fugitive criminals, Damiri said. At the same time, Abu Dis and other Arab suburbs of Jerusalem fell outside the jurisdiction of Israeli civil police, leaving a vacuum that drew car thieves and drug dealers. 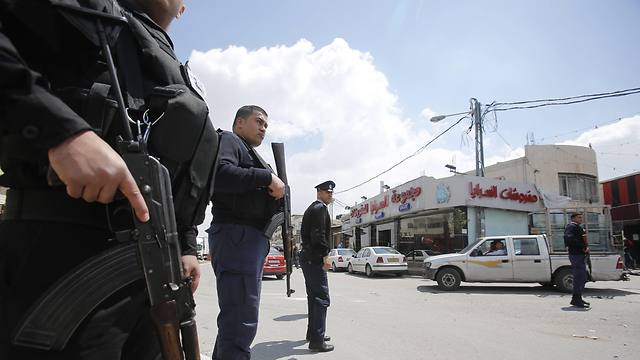 Palestinian policemen patrol Azariyeh in the West Bank (Photo: AP)
Earlier this month, Israel finally lifted its ban and allowed 90 armed, uniformed officers to deploy in four communities - Abu Dis, Azariyeh, Ram and Biddou - which have a combined population of about 130,000. Local residents cheered the decision. "We need security in this town," said Ashraf al-Muhtasseb, a restaurant owner in Azariyeh. "Thieves sneak into homes and steal in the middle of the day, drivers use stolen cars and 13-year-old boys smoke marijuana." The crime-fighting deployment is part of complex and often contradictory Israeli-Palestinian relations. Political animosity runs high, with the two sides poised for a possible showdown at the UN Security Council and the International Criminal Court. Following the re-election of hard-line Prime Minister Benjamin Netanyahu, prospects seem faint for renewing peace talks. Palestinian President Mahmoud Abbas, head of the self-rule government, is under domestic pressure to halt cooperation between his troops and Israel against his Islamic militant rival Hamas.

At the same time, Israel significantly has eased sweeping restrictions on Palestinian movement, many imposed after the outbreak of the Palestinian uprising in 2000. 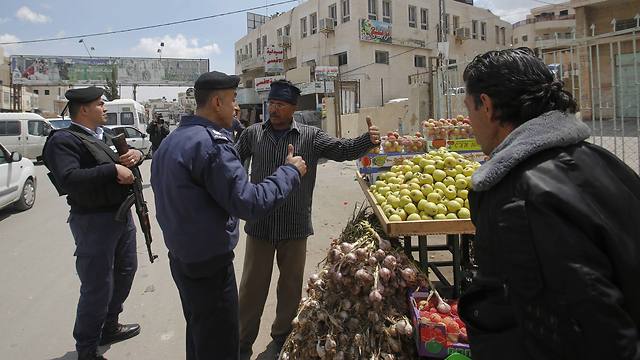 Palestinian policemen patrol Azariyeh in the West Bank (Photo: AP)
An estimated 400,000 older West Bank residents - women above 50 and men above 55 - can enter Israel and East Jerusalem without special permits. Several dozen Palestinian doctors are now allowed to drive cars with West Bank license plates into Israel, a rare exception. Meanwhile, Israel has lowered the age for Palestinian men to enter Israel for work, to 22 from 24, and expanded the number of Palestinians permitted to work in Israel to 53,000. Lt. Col. Kobi Gertswolf, head of the civil coordination branch of Cogat, the Israeli defense agency responsible for Palestinian civilian affairs, said such measures promote peace and stability. "We want every regular Palestinian resident to have the ability to work ... and have a regular life. This is our simple interest," he said. "All of these steps, they can really ease the life of the Palestinian residents." Some Palestinians officials believe Netanyahu is easing day-to-day friction because there are no prospects for ending the Israeli-Palestinian conflict. Netanyahu has said a Palestinian state would not arise on his watch, though he later softened the comment. Netanyahu "is easing the daily life of the people to avert an imminent explosion," said Abbas aide Mohammed Ishtayeh. On a recent morning, Palestinian officers directed traffic in the jammed main square of Azariyeh, next to Abu Dis, and patrolled neighboring streets. "We want people to get used to seeing the police uniform first, and then we will start cleaning up troubles,'" police spokesman Loay Irzekat said. "We will start with drugs because it's the most urgent problem." Police also will try to arrest scores of fugitives and seize thousands of stolen or unlicensed cars in the three communities. The 90 officers being deployed in the suburbs will have their own police stations, but still have to coordinate with Israel if they want to move from there to other areas of the West Bank. In Ram, a suburb of 60,000 northeast of Jerusalem, police set up their new station on three floors of a former apartment building and planted a Palestinian flag on the roof. "We expect to see a new era in our town," Mayor Ali Maslamani said. "An era of law and order after a long period of lawlessness."