Over the past decade, Hezbollah launched several UAVs that flew into Israeli airspace, and according to reports, the airstrip is also used to launch drones to strike against Syrian rebels trying to oust President Bashar Assad.

According to the defense magazine, these airstrips were built some time between February 27, 2013 to June 19, 2014. 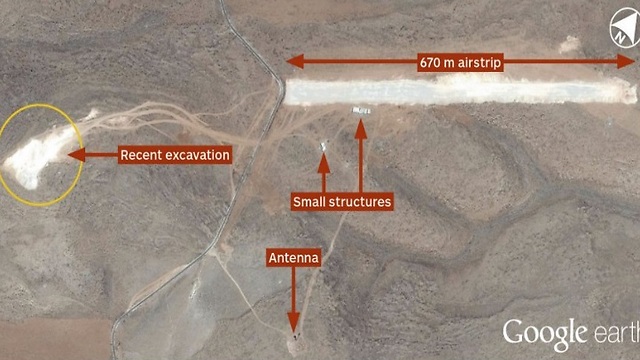 The Jane's analysis found a checkpoint and swing gate similar to ones found in other Hezbollah facilities in the Bekaa Valley.

The makeshift airport includes one unpaved runway which is 670 m long and 20 m wide. The short length of the strip suggests, according to Jane's, that it is not used for arms smuggling from Syria and Iran, as almost all Syrian and Iranian military aircraft require longer runways to land.

Another use for the runway according to Jane's could be to launch Iranian UAVs, including the Ababil-3 and possibly the newer and larger Shahed-120, used by Assad forces against the rebels.

Hezbollah sources confirmed to Jane's that the organization was using UAVs against the rebels in Syria, particularly in the Qalamoun Mountains area on Lebanon's eastern border with Syria. Saudi newspaper Al-Watan also reported last year that Hezbollah has built a military airport for its drones in the Bekaa Valley. In April of 2013, the Israel Air Force intercepted a Hezbollah drone over the sea off the coast of Haifa. Some six months earlier, in October 2012, two IAF fighter jets shot down a Hezbollah drone that was able to infiltrate Israeli airspace. Hezbollah leader Hassan Nasrallah said the drone was Iranian-made and was able to fly over "several important (Israeli) military bases" before being shot down. During the Second Lebanon War, on August 7, 2006, an Iranian-made drone sent by Hezbollah was shot down over the sea, some 10 km off the coast of Acre. In April 2005 and November 2004, Hezbollah drones flew over northern Israel and returned to Lebanon without being shot down.