A Palestinian terrorist attacked a Border Police officer on Saturday evening, stabbing the Israeli in his head and chest with a knife near the Cave of the Patriarchs. The attacker rushed a combat unit, injuring one before the other soldiers fired at him.

Magen David Adom emergency personnel treated the soldier and he was evacuated to Sha'are Tzedek Medical Center in moderate condition; the terrorist succumbed to his wounds later in the evening.

A doctor in the hospital's trauma unit said the soldier was fully conscious, "he told us about the stabbings he experienced."

Some 20 rioters were wounded on Saturday afternoon in East Jerusalem clashes which erupted after the thwarted terror attack in Ma'ale Adumim, in which the attacker was killed, according to the Red Crescent Society.

A police officer was wounded by a Palestinian rock-thrower during the clashes. He was evacuated in light condition to the Hadassah Ein Kerem Medical Center. In the afternoon hours, several dozen youths began rioting in the At-Tur neighborhood of East Jerusalem in response to Friday night shooting of 16-year-old Ali Said Abu Ranam, who was killed after attempting to stab a Border Police soldier at a checkpoint near Ma'ale Adumim.

The Red Crescent reported that in the clashes between Palestinian youths and Border Police forces, some 20 rioters had been wounded by non-lethal ammunition. The protesters set tires on fire and blocked one of the roads leading to the Ranam family's home while throwing rocks and firebombs towards police and Border Police units. 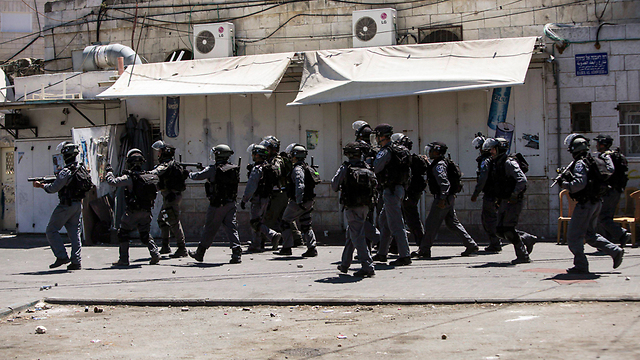 At-Tur clashes (Photo: EPA)
Police said the forces were using crowd-dispersal measures. "The police operated unequivocally and with determination against the law-breakers and against any attempt to disrupt the peace," said a police statement.

Earlier on Saturday, security forces searched the home of the deceased Palestinian; his father was taken in by police for further questioning. Ranam's body has yet to be released by police over disagreements on the funeral arrangements.

The family members said that the police stipulated the release of his body on the condition that the funeral will be limited to 20 guests. The family rejected the precondition. After the incident, East Jerusalem mosques announced a general strike to mourn the killing of Abu Ranam; the last-minute strike was respected by part of the Old City merchants. The Palestinian Authority released an official statement condemning the death and claimed that Israel was lying about the young Palestinian's intention to stab an officer at the crossing. Hamas said the incident was "an execution and cold-blooded murder of a Palestinian." A preliminary investigation of the incident, which occurred near midnight on Friday night, concluded that the teen arrived at the crossing outside of At-Tur and tried to hurt the Border Police fighters using a large butcher knife. The soldiers successfully fended off the attacker, who ran towards a nearby check point. The soldiers began pursuing the suspect and fired a warning shot in the air while warning the guards at the next crossing to avoid the risk of crossfire. At this point the attacker pulled out a second knife and continued running at the guards, who were calling on him to stop. When he refused to halt his advance, they fired.

Magen David Adom rescue personnel arrived on the scene and confirmed his death.