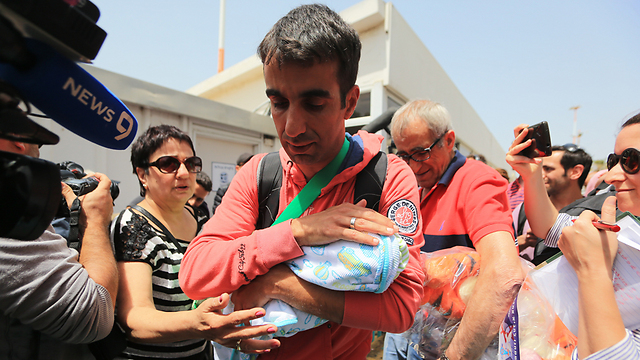 Surrogate mothers from Nepal will be allowed to come to Israel

Attorney General Yehuda Weinstein approved on Monday a plan to allow surrogate mothers in Nepal who are in advanced stages of pregnancy to come to Israel, in accordance with the Interior Minister Gilad Erdan's recommendation.

Weinstein said it was essential for the surrogate mothers to willingly agree to leave Nepal for Israel, and that the Israeli consulate or a doctor would have to explain the risks involved.

Five newborn babies and their families returned to Israel from Kathmandu on Monday afternoon, after fleeing the scene of the disastrous earthquake in Nepal that claimed thousands of lives.

The plane was sent by insurance companies David Shield and Phoenix, and was met by an ambulance in case of emergency.

Families with newborns land in Israel

One of the new fathers said: "There were moments of insane fear; it was a nightmare that we are just starting to digest now." The fresh parents thanked MDA and Interior Minister Gilad Erdan for their efforts and said," There was a feeling we were being taken care of."

"They came to pick us up, it was like meeting angels," said one father.

"There are more small babies that are two weeks old that are still there. It is cold and rainy there, you must bring them back," said another father.

One father described the dire situation they left behind. "We couldn't bathe the children, there was no sterilization, and we borrowed milk from one another," he said. "It wasn't so obvious that they would take care of us. I want to thank Minister Erdan, who brought us, to thank MDA, and to thank the media that was with us."

Magen David Adom spokesman Zaki Heller said that, "none of the passengers needed hospital treatment, but an ambulance was waiting should it be needed. Yesterday at 5pm an MDA delegation landed in Kathmandu to act as an advance force for Israelis and the Red Cross to help and examine needs and conditions on the ground."

The first Israeli airlift from Nepal after Saturday's 7.9 magnitude earthquake touched down at Ben-Gurion Airport late Sunday night. The plane also carried Israelis who had been in the country, including a number of people injured in the massive tremblor, and new-born surrogate babies and their parents.

On board the first plane to return to Israel was Omri Lanzet and his 10-day-old son Yonatan. The two headed directly from the airport to Soroka Medical Center in Be'er Sheva, where the baby underwent medical examinations.

Omri Lanzet with his newborn Yonatan at Soroka Medical Center. (Photo: Haim Hornstein)
The doctors found the baby to be in good condition, although he was suffering from a leg injury. Another two families with newborn surrogate babies were also on the plane. The families also asked to be taken to hospitals to have the babies examined. The plane also carried three young Israelis who had been lightly injured during the quake, among them a 20-year-old with a minor leg injury.

The death toll climbed above 3,300 on Monday, two days after the earthquake struck central Nepal and surrounding regions.

Omri described a frightening situation at the moment that the quake hit: "We were getting ready to go to friends who were with us (in Nepal) and the ground began to shake. I took Yonatan in a carrier and went down three floors. I waited outside on the grass and tried to get as far away as possible," he said. "The entire building moved like a wave, it was insane. It was impossible to stand still – you either fell or sat down." Omri and other Israelis traveling in Nepal quickly realized the scale of the earthquake. "We began to realize the size of the disaster – the destroyed buildings, the injured, cooks that exited kitchens with their legs burned because of the pots of hot water. There was significant damage throughout the area.

"We were with a baby who was a few days old, with no heating. The food and the diapers ran out. From there we went to the consulate. They took care of everyone, but everyone was on the grass there too because we were not allowed to enter buildings," recounts Omri.

Lanzet called upon Israel to return all the families with newborns from Nepal: "The babies are the most vulnerable and some were born prematurely. It not the place or the right conditions for a newborn child."

Also on the flight was MDA southern district deputy director Moshe Vaknin. "The flight was fine for them. They said that since hearing the noise (of the earthquake) they have not been able to sleep at all," said Vaknin.

At Soroka Medical Center in Beer Sheva, pediatrician Dr. Guy Beck said that Yonatan was about to undergo an examination in Nepal upon being released when the earthquake hit. "The newborn department and the neonatal intensive-care unit were damaged during the earthquake and they were forced to go outside in an encampment. They then go on the first flight.

"They were mostly very emotional. The father was worried that the baby did not undergo a preliminary examination but we calmed him down. (The baby) arrived a bit tired and hungry but the examinations were valid. For us it was pretty routine but it was touching. The two were released to their home in the center. We will take in anybody who comes to us," Dr. Beck added.

More families and newborn babies who were in Nepal during the earthquake are expected to land in Israel on Monday.

On Sunday, a MDA crew led by Director Eli Bin and Dr. Rafi Strugo landed in Kathmandu. The two will arrive at the Chabad House and will set up an operations room in order to aid the Israelis still in Nepal.

The IDF force will also set up a military operations room and a field hospital. According to the commander of the unit, Colonel Yoram Loredo, the unit will stay in Nepal for two weeks.

Other Israelis who are still in Nepal are anxiously waiting to return home.

Ilana Curiel and Noam "Dabul" Dvir contributed to this report.