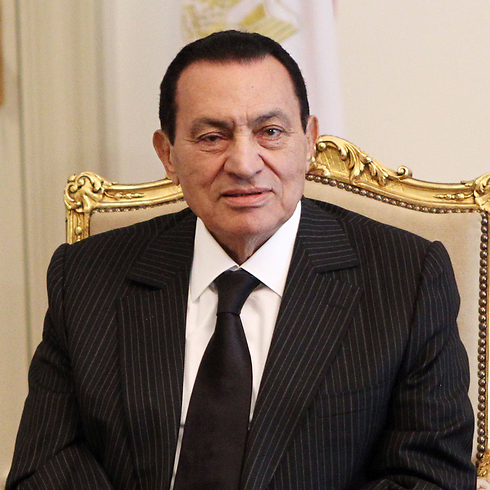 Mubarak: Israel tried to deceive Egypt in every way

Ousted president of Egypt, Husni Mubarak, said Sunday in a televised phone interview that Israel tried to deceive Egypt a month before returning the Sinai Peninsula as part of the historic peace deal signed between the two former foes.

It seems the worst days are behind Mubarak. Along with his recent acquittal, he recently saw his replacement, Mohammed Morsi, sentenced to 20 years in prison and his sons Alaa and Gamal released from prison, free to roam the streets of Cairo.

Ousted president Husni Mubarak. (Photo: AFP)
On Saturday, Egypt celebrated the 33rd year since Israel returned the Sinai Peninsula to Egypt on April, 25 1982. Now that Mubarak has been acquitted of the most serious charge of which he was accused – the killing of protesters on January 25, 2011 – he felt comfortable enough to conduct an interview with his favorite broadcaster Ahmed Moussa on the Sada El-Balad TV station.

During the phone interview, which Mubarak conducted from his room at a military hospital in Cairo, where he has been staying for the past few years because of his health condition, the former president spoke out against Israel and claimed that it tried to evade commitments it made during the peace deal it signed with Anwar Sadat.

"Israel tried to deceive us in every way possible like it has done on the issue of the Golan Heights. It tried to keep Taba for itself with the excuse that it has a hotel there… it got to the point where in March 1982, a month before the withdrawal, the Israelis came and said that Taba was not part of Egypt's historic borders," Mubarak said.   In the surprising interview that lasted 13 minutes, the 86-year-old spoke of the battles to take back Sinai.

The former president, whose voice has hardly been heard since he was ousted in 2011, sounded lucid as he described his role in the battles between Egypt and Israel.

He praised current President Abdel Fattah al-Sisi, even though he did say that Egypt's national security was unstable. Despite this, he completely backed al-Sisi, saying: "Egypt is in the hands of a smart national leadership. The Egyptian nation needs to stand behind it because there is no president that can operate on his own."

Mubarak, who was deputy to former Egyptian president Anwar Sadat and whose name has been tied to conspiracy theories surrounding Sadat's assassination, spoke of the former leader fondly. "I hoped that Sadat would be the one to wave the Egyptian flag in Sinai on April 25, 1982, because he was the one who decided to go to war and make peace. He paid with his life to liberate the land." On Saturday, Mubarak supporters gathered outside the hospital where he resides to celebrate the historic day. This was not the first phone interview Mubarak has conducted since he was acquitted. Mubarak spoke with the same Egyptian broadcaster in November, after not giving an interview for years, and said, "I felt as though I did nothing, and that the story was over."