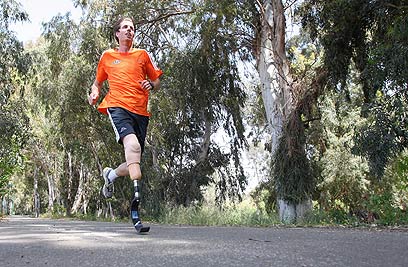 Eitan Hermon vowed to keep running after losing right leg in Lebanon War; 'I gave my all,' says new champion.

Some 120 disabled athletes participated in this year's race through the English capital.

Hermon, 41, finished his heat in 34th place, in a time of 3:07.10 hours, which earned him the world championship crown. Hermon, however, was unable to achieve his second goal – to set a new world marathon record for single-leg amputees. The current record stands at 2:54.06 hours.

"The run started really well; I gave my all and that's how things turned out," a clearly excited Hermon said after the event.

"My goal is always to record the best result I possibly can. I hope to earn the chance to participate in the Tokyo Olympics (in 2020), because I'm not going to make it to Rio. I want to thank the Tikvot organization, which helped me get here. My next competition will be in September, the Berlin Marathon."

Hermon was wounded in the Second Lebanon War by a roadside IED and was forced to have his right leg amputated below the knee. He vowed that he would still run a marathon.

Following a long rehabilitation process, he again took up running; and just three years after his injury, he completed his first 10-kilometer run in Tel Aviv with the aid of a special prosthesis.