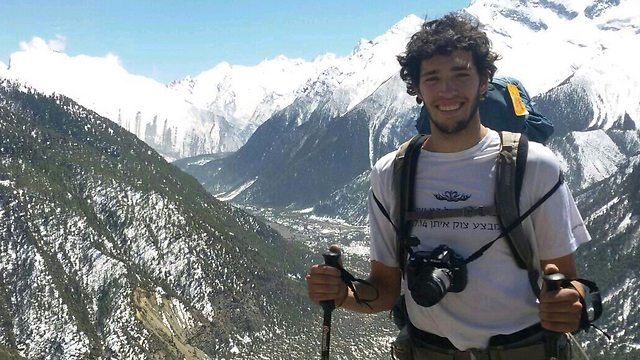 Four days after devastating earthquake, Or Asraf, who fought and was wounded during Operation Protective Edge, is the only Israeli still missing in Nepal.

One Israeli, Or Asraf, remained out of contact in earthquake-stricken Nepal as of Wednesday afternoon, days after the catastrophe that killed thousands.

Asraf last spoke to his parents in Israel about a week before the 7.9 magnitude earthquake shattered Nepal and is believed to have been trekking in the Langtang region when the quake hit.

Or Asraf is only Israeli still out of contac in Nepal.

Asraf's parents, Orit and Patrick, had greeted Israeli travelers who returned to Israel on Tuesday at Ben Gurion airport in hopes some of them could shed light into their son's whereabouts; however, only two travelers had seen him before the quake struck.

A friend of Asraf's who had traveled with him in East Asia, Guy Yizhak, said he spoke to Or a few hours before the earthqauke. According to Guy, Or was about to set out on a trek in Langtang yet it is unclear if he set out alone or with others. "We don't know who exactly he went on the trek with because he said he might go alone," said Guy.

Home Front soldiers sent to assist in search-and-rescue missions (Photo: IDF Spokesperson)
The IDF erected a field hospital in Kathmandu set to begin operation on Wednesday morning. The IDF mission's plan is to stay in Nepal for about two weeks to treat the injured, after which it will assess the situation and consider a longer stay. An El Al plane carrying 229 Israelis who were stranded in earthquake-hit Nepal landed at Tel Aviv's Ben Gurion International Airport early Tuesday afternoon. Among the passengers were 15 newborns, including three premature babies.

Tents at the IDF field hospital in Kathmandu (Photo: IDF Spokesperson)
Around 70 Israelis who arrived in Kathmandu earlier in the week decided not to evacuate on the state-funded El Al flight. The Foreign Ministry decided not to fund further flights for Israelis in Nepal. Meanwhile, Nepali officials conceded they had made mistakes in their initial response, as survivors stranded in remote villages and towns waited for aid and relief to arrive.

The number of people killed has risen to 5,006, a Nepalese home ministry official said on Wednesday. Nepal's Prime Minister Sushil Koirala told Reuters on Tuesday the toll from the 7.9 magnitude quake could reach 10,000.

Some Israelis were still awaiting rescue teams on Wednesday. Shahar Shavit and Naama Shohat, both fresh from service as IDF officers, were trekking in the frozen lakes region when the quake shit. Zohar Shavit, Shahar's father, said their situation had not improved since Saturday.

"Our girls are still on the mountain peak and we have no contact with them," he said. "We are worried that they won't be able to get through another freezing night on the mountain. Testimony from other groups that are in contact describes incidents of violence by Nepalese in the mountains against the kids and the helicopter team."

Or Asraf, 22, also recently out of the army, has not spoken to his parents since Friday. His mother arrived at the airport in Tel Aviv anyway, hoping he had made it onto the El Al rescue flight. "He went on a trek near Langtang a few hours before the quake on Saturday, and we haven't heard from him since," she said.

Orit Asraf, mother of Or, at the airport with a sign asking if anyone had seen her son

Meanwhile, police in Nepal have arrested dozens of people on suspicion of looting abandoned homes as well as causing panic by spreading rumors of another big quake.

Police official Bigyan Raj Sharma said 27 have been detained for stealing from homes whose owners moved out following Saturday's quake and powerful aftershocks.

The aftershocks have waned but people are still anxious, many preferring to stay out in the open. Sharma says another four people were arrested for spreading false rumors of an impending quake through social media and text messages.