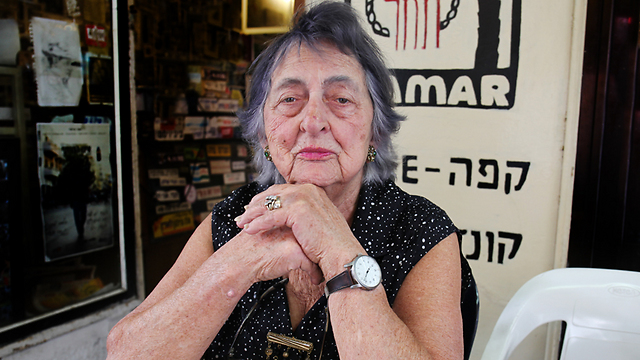 Café Tamar – the last bastion of the old guard of Israel's left in Tel Aviv – plans to shutter its doors.

Café Tamar – the symbol Tel Aviv's left wing bohemian scene – will shut its doors after 74 years. Located on Tel Aviv's Shenkin St. – itself a faded symbol of the White City's political heyday – the café was once the regular stomping ground of poets, artists, actors and political activists.

In recent years, it caters mostly to a handful of elderly regulars, mostly veterans of the scene. At the age of 90, Sara Stern, its historic owner, decided to close the café.

"This was done out of concern for our grandmother's wellbeing," said Ayelet Nahmias-Verbin, a Knesset member from the center-left Zionist Union, and Stern's granddaughter. "This decision she reached herself, she understands that the time has come."

The café opened its door in 1941, and was bought by Avraham and Sara Stern in 1951. Stern has run the place since and is known to regulars for her outspoken opinions and brash style. Over the years, the café became the home away from home of political activists, but also Israel's biggest artists.

Poet Natan Alterman, painter Nahum Gutman were among its first prominent clients; later they were joined by painter Meir Pichhadze and Dudu Bussi, singer Amos Lavi and poet Ronny Somek, to name a few. Today, some of Israel's most famous actors and journalists still frequent its old tables.

"This was a big dilemma," explains Nahmias-Verbin. "Over the past year we felt that she had lost a lot of her strengths and we thought it would do her good."

The timeless interior of the cafe (Photo: Lea Goldman Holterman)

Though its regulars say they want to try to run the place on together with some of its remaining staff members, the family says this is unlikely.

"This is not a regular business, so I'm not sure it can be run by anyone else, at least in my opinion. Shenkin would never have turned into the symbol it was without the blend of journalist from (the now defunct) Davar newspaper, politicians who came to talk shop and the artists who turned the café into their home," Nahmias-Verbin said.

There are still a few weeks, so if you're in Tel Aviv, it's worth paying your respects to this old icon before it is torn down and turned into an exclusive housing development.

Omer Benjakob contributed to this report.