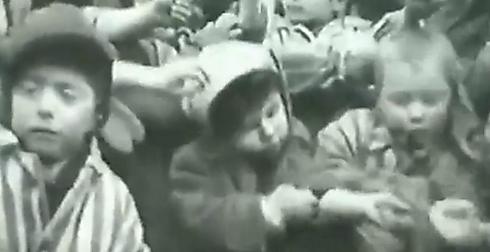 The lost children of the Holocaust

Polish researcher explores the untold story of Jewish children who were adopted by Christian parents during World War II and experienced a difficult identity crisis at the end of the war, some refusing to return to their families or to Judaism.

About a million Jewish children lived in Poland before World War II. Only few of them survived the Holocaust, mostly after being "adopted" by non-Jewish parents. But for an unclear reason, the story of these "miracle children" was pushed aside and neglected by historians for many decades.

Until Prof. Joanna Beata Michlic came along. Prof. Michlic is a Jew of Polish descent, a social historian who specializes in Holocaust research and in its effects on children and family. She embarked on a journey retracing those children's footsteps, delved into archives of Jewish organizations, orphanages and kibbutzim in Israel, and collected live testimonies. She also spent some time in Israel as a scholar as part of the prestigious Fullbright program, which advances academic-scientific cooperation between the United States and Israel.

Study:
Without Holocaust, there would be no haredim today
Moshe Glantz, Rafi Barbiro
Researcher finds there were only several thousand yeshiva students in Europe before World War II. Survivors of Nazi genocide realized they must fight to restore world of Torah.
Study: Without Holocaust, there would be no haredim today
Her study presents a grim picture of a serious identity crisis, families which fell apart following because of the war and families which fell apart at the end of the war. "Childhood in the Holocaust is an issue which has been pushed aside," Michlic says about the exclusion of children's experiences from the academic research. "There is a dispute over the use of survivors' testimonies, particularly children, and it’s extremely problematic, because if you look at research as a source of understanding history, the children and their experiences aren't even there."

A history of a Holocaust without children

Prof. Michlic is the founder of the Hadassah-Brandeis Institute and a lecturer at the University of Bristol in the United Kingdom, and is a sort of enigma. She was born and raised in Poland. A study she conducted as a student about anti-Semitism in her country led her to information documenting the human story of the Jewish children who were saved by Polish families during the Holocaust.

Why was there no interest in what the children had to say?

"There was a feeling that the information was distorted. Children's testimonies are naturally less accurate. Their interpretation of reality is sometimes different. The fact that they were young made historians question their ability to remember. A child was of course the ultimate victim, and his testimony was a symbol – but only on the psychological level.

"Historians didn't feel that it was an important voice through which the circumstances and historical events – and the history of the childhood in general – during and after the Holocaust, should be examined. And this is, in my opinion, an important part of the documentation. It's true that children have a different sense of time, a different outlook. Very small children couldn't even remember their name. They lost the reality of who they were, as they were unable to use their real name for a while."

In her study, Prof. Michlic documents heart-rending descriptions of tragedies and traumas suffered by the lucky children who survived with a false identity.

"It was so traumatic," she says, "that after the war, when the children's relatives arrived to take them home, they saw them as complete strangers. Some of the Jewish children who were transferred to a Jewish orphanage in Poland after the war tried to escape to the people they saw as their parents. The emotional connection between them was very deep in some cases, and the separation was heart-rending."

Who were the Christians who took in those children?

"The rescuers came from a very wide variety. Some took care of them as if they were their own children. Others expressed anti-Semitic views and some were violent towards the adoptive children, as well as towards their biological children. There were also cases in which families murdered the children they were entrusted with.

"In homes in which children were abused – sexual abuse too, by the way – they were very happy to find out about their Jewishness and leave. But in families in which they felt loved and appreciated, there were huge difficulties. Some of the parents didn't even know that the child they adopted was Jewish, and the separation was heart-rending. It took some of them years to really say goodbye."

Children in the Holocaust. 'The separation from their adoptive families was heart-rending. It took some of them years to really say goodbye'

Michlic further notes that under the Soviet regime, "the issue because a taboo. The Polish families were afraid to reveal their connection to the Jews' children, and therefore did not maintain it. The archives were sealed. Only today, when they have become local culture heroes, the issue can be discussed openly. But most of them are no longer alive, and the relations between them and the children they raised were broken in a very traumatic way.

"One of the most wonderful places to learn about the connection was through letters the children wrote to Jewish organizations during the civil struggle in Poland, asking that their rescuers be protected."

The documentation discovered by Michlic described dozens of cases of difficulties in bidding farewell to the adoptive family. Sara Avinun, one of the interviewees in Michlic's research, documented her story in the book "Rising from the Abyss," which Michlic sees as one of the most powerful and important depictions of the child experience during the Holocaust. But this documentation, she says, didn't receive the proper research attention in previous years either.

"She describes the experiences of a little girl, who at a certain stage, after a number of difficult experiences of sexual abuse, abandonment and more, found herself in a Christian orphanage. She was taken away from there by a childless Polish couple and created a renewed childhood for herself," Michlic says. "After the war, when she was nine years old, her uncle arrived, and she simply refused to go with them. She escaped back to her 'parents,' until her grandfather took her away forcibly. He was a religious person and he put her in a kibbutz with other children, because he felt that the gaps between them were too big and he wanted her to reaccept her Jewish identity." Avinun's story ended well. "She has a wonderful family and a Jewish identity, but for a long time she kept in touch with her adoptive parents, who didn’t even know she was Jewish. There were periods of great difficulties, of a mixed identity, of a rejection of anything related to Judaism and Jews. The adoptive mother refused to acknowledge the fact that the daughter was Jewish, and just wanted her back even many years later. "And there were children who decided to stay with their Christian identity, and kept their Jewish identity a secret for many years. This group has been shrinking in recent years. There were children who found out the truth as adults, like Romuald (Jakub) Weksler-Waszkinel, who was already a Catholic priest when he learned the truth, and to this very day he lives in Israel to this very day with a split Jewish-Catholic identity."

Some of the children found it difficult to get used to the idea that one can be Jewish again (Archive photo: AP)

According to Michlic, "Even if the parents survived, there were children who wanted to officially convert to Christianity. These experiences, unfortunately, were not part of the historical memory for many years. Some of the children didn't really talk about it and suppressed it, but even those who did were not heard. And so you could see a child who wants to immigrate to Israel on the one hand, and continues to go to church every Sunday on the other hand."

The division of the religious identity continued. Michlic describes many cases in which small children continued to pray to Virgin Mary, or kept her pictures. And it accompanied them even when they already knew they were Jewish.

"Others," she explains, "found it difficult to get used to the idea that one can be Jewish again. These are children whose entire family, community, was erased. They were afraid to return to their Jewishness, afraid to speak Yiddish. In many cases, they were raised on anti-Semitic stories, which increased their revulsion towards the discovery."

Trauma moved on to next generation

How did the families that survived the horror deal with the new difficulty?

"We know that the best results were achieved in cases in which the children were not forced to abandon their Christian beliefs. The family rehabilitation was the hardest. The Jewish identity was just one problem among a slew of difficult problems. For example, according to the Jewish organizations' documentation, most of them faced difficulties concerning food.

"There were children, boys, who were forced to dress up as girls in hiding, and they continued to dress as girls for years, and their gender had to be restored. Some of the lucky children who managed to survive the Holocaust with one parent, and arrived in Israel, succeeded in developing very close relations. But what happened in cases in which the parent remarried?

"We must remember that the parents who survived had their own problems. They survived concentration camps, death camps, even Soviet occupation, and years of hiding in Aryan areas. Some suffered from mental and emotional problems. They didn't always have the ability to deal with the child's traumas. Children were sometimes left in orphanages for a long time, until their parents managed to get back on their feet."

And what happened when the parents didn't survive?

"It wasn't always clear who was responsible for the children. Sometimes it was an aunt or uncle, sometimes an extended family. Today we know from research that children who were taken care of by relatives sometimes felt like they don't belong and didn't receive the level of care they needed. Some of them just didn't know how to deal with a child who had gone through what they went through.

"Most of the children," Prof. Michlic concludes sadly, "were not smiling 'poster kids,' but scarred children with difficult problems. The untreated trauma moved on, when they became parents, to the second and third generation. Today's Israelis have been raised and are still being raised in the shadow of this trauma. It isn't over yet."