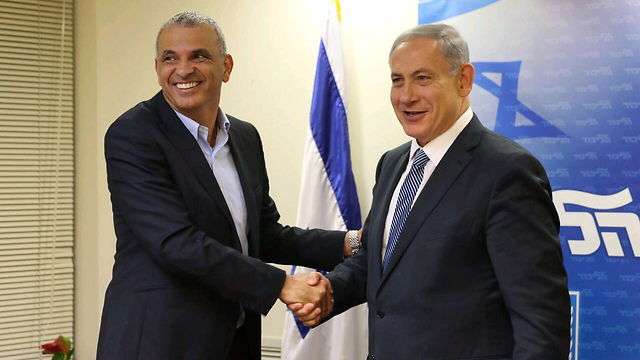 Construction, finance, and environment portfolios handed to Kahlon, while UTJ gets the Health Ministry and Finance Committee and a pledge to invest one billion shekels in haredi education.

The contents of two coalition agreements Likud signed with United Torah Judaism and Kulanu were publicly released on Sunday, revealing the demands and promises made by the parties.

The documents were scanned after being signed by both parties and are the first in a series. Two additional agreements were to be signed by Tuesday with other parties.

The document also stated that an MK from Kulanu will head the Labor and Welfare Committee. Kahlon will fill the role of Housing Cabinet chairman. Kulanu will have two ministers in the Ministerial Committee for Legislation, and the Defense Cabinet will include Kahlon as a member and MK Yoav Galant as an observer. The agreement also stated that once the new government is formed, Kulanu will support a proposal by Prime Minister Benjamin Netanyahu, referred to as "the Norwegian bill", that would allow an MK from a party that has less than 12 MKs to resign from the Knesset and serve solely as a minister.

The agreement stated that a special committee will be formed to advance legislation on housing, which would be headed by a member of Kulanu. Kulanu also received a pledge that the government will work to provide an addition of 700 housing units per year to the number of apartments for which people are eligible through the Construction Ministry and the Immigration and Absorption Ministry.

It was further stated that the Finance Minister will have the authority to expropriate lands for use in large-scale housing projects, in an attempt to encourage construction. Particular emphasis will be given to rehabilitation of neighborhoods in the periphery.

Housing tenders will be offered as part of a prior plan to subsidize apartments in periphery areas for young people, and up to 80 percent of them will be allocated to young couples or single people under age 35. The document also said that the number of apartments for public housing and rentals will be expanded.

United Torah Judaism members signing the party's agreement with Netanyahu
Besides the known amendments to the Equal Share of the Burden Law, the removal of criminal sanctions for yeshiva students who don't serve in the military, and returning child benefits to their original levels, the agreement also said the new government will protect the haredi public's way of life and will bolster the position of haredi educational institutions. Political sources emphasized that this was a budgetary amendment that will cost up to a billion shekels diverted to haredi educational facilities. The agreement also said the government will pass an amendment involving the Committee for the Appointment of Rabbinic Judges, in which three government ministers, three MKs – two from the coalition and one from the opposition – and a United Torah Judaism member will sit. According to the agreement, the change to Israel's conversion laws by the previous government, which gave local municipal rabbis power at the expense of the central rabbinate, will be reversed. The position of rabbinical courts will also be protected, and marriage registration will be possible only at religious councils or the local rabbinate. Additionally, the status quo regarding kosher laws will be maintained, and the government will work to include workers from the haredi sector in public service.