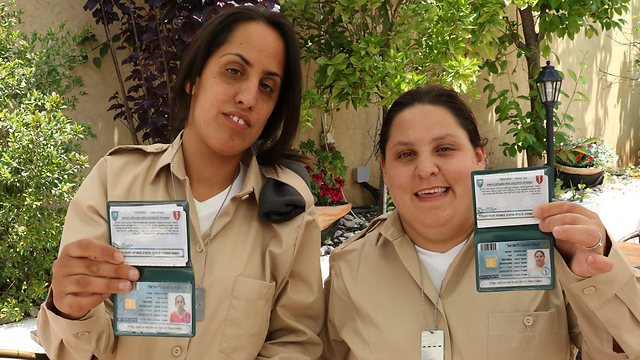 'Now I'm a soldier in uniform,' says 22-year-old Tsofit Zendani, who, together with Mor Masud, fought for her right to serve.

The Israel Defense Forces chose not to recruit them because they are defined as individuals with special needs, but Mor Masud from Kibbutz Na'an and Tsofit Zendani – both 22 – insisted, fought and won.

And on Tuesday, the two young women enlisted in the Israel Air Force, donned their uniforms and received their dog tags.

The two will serve at the Palmachim Airbase, where they have been working in the kitchen as volunteers for the past two years.

"For two years, I worked in civvies, and now I'm a soldier in uniform, with dog tags and a military ID book," a proud Tsofit said Tuesday.

Mor and Tsofit with their families (Photo: Shaul Golan)

"I'll earn a soldier's wages like everyone else, and I will leave the base for home in the air force uniform I have dreamed about wearing. I was very excited to receive the uniform at the Induction Center; it was really great and I couldn't wait for my parents to see me."

The long struggle to allow Tsofit to be just like everyone else, said Tsofit's mother, Yona, came to an end the moment she put on her uniform.

"I, too, have a daughter with special needs, and I know what it's like to see these children enlisting," said Major General (res.) Gabi Ofir, chairman of Lend a Hand to a Special Child, which, among other its other activities, helps special needs youth enlist in the IDF.