Attorney General Weinstein. The word 'kosher' must not be written
Photo: Gil Yohanan 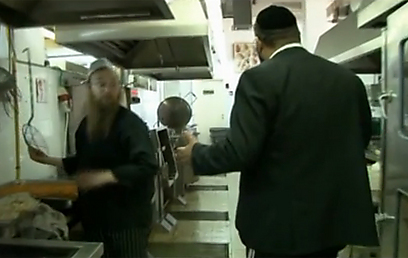 Attorney general informs High Court that alternative kashrut supervision in restaurants will no longer be considered a criminal offense; Chief Rabbinate: Decision will lead to deception.

Attorney General Yehuda Weinstein informed the High Court of Justice on Wednesday that the state would no longer fine restaurant owners who claim to be supervised by private kashrut bodies and would cancel finds imposed on them for deceiving consumers. The decision was met with angry reactions in the Chief Rabbinate of Israel. The State Prosecutor's Office announced the decision in a letter to Attorney Riki Shapira-Rosenberg, who is representing two restaurant owners who petitioned the High Court over the issue on behalf of the Israel Religious Action Center: "In the current legislative situation, fines or indictments will not be filed against owners of restaurants who will present a document showing that the place is inspected or supervised by a certain body."
Growing Trend
Kosher restaurants giving up certification
The Media Line
Owner of Italian trattoria in Jerusalem cites costs, inconvenience as reasons for parting with Rabbinate certificate. 'There are a lot of people who trust me and my word more than the Rabbinate’s word that we’re kosher,' he says.
Kosher restaurants giving up certification
The attorney general stressed, however, that the restaurants must make it perfectly clear, in a way which will not mislead the reasonable person, that the document presented to the consumers is not a "kashrut certificate" on behalf of the Chief Rabbinate. In addition, these restaurants will not define themselves with the word "kosher," as demanded by the Rabbinate. "In such a case, it would be considered a criminal offense according to the current legislative situation," the State Prosecutor's Office clarified.

Rabbinate officials were furious with the decision, arguing that it would lead to deception and mislead the average kashrut-observing consumer, who only trusts supervisors on behalf of the state religious establishment.

Nonetheless, the Rabbinate officials said they were not concerned, as the ultra-Orthodox parties had already been promised an amendment to the law which would preserve the current situation, as part of the coalition agreements.

Kashrut supervisors. 'The public is thirsty for this change (Archive photo: Eli Mandelbaum)
At the end of an urgent meeting convened by Israel's chief rabbis on Wednesday, they asked the attorney general to grant the Rabbinate external representation in the High Court instead of the State Prosecutor's Office representation. They also asked that the discussion of the petition be postponed by several months until the legislation on the issue is completed. Chief Rabbinate Director-General Elchanan Glatt told Ynet that "the chief rabbis met with the attorney general and tried to reach an understanding with him, but unfortunately did not success. If we see it fit, we will demand external legal representation at the court. In addition, I know there is a legislation process and coalition understandings on the issue."

He added that "such a decision harms the Chief Rabbinate's legal authorities, and most importantly, harms businesses' kashrut and the majority of the Israeli public which demands kashurt."

'No monopoly over the world kosher'

Attorney Shapira-Rosenberg welcomed the attorney general's decision, referring to it as "a step towards cancelling the Rabbinate's monopoly over kashrut in Israel. However, she expressed her discontent with the attorney general's reservation, demanding a ruling that the Rabbinate "has no monopoly over the word kosher." "The state must allow restaurant owners to present themselves as kosher. This interpretation of the Kashrut (Prohibition of Deceit) Law matches the basic principles of law in the State of Israel and separates between kashrut which is a religious value, and a monopoly which is an economic interest," she said.

About three weeks ago, Ynet reported that senior Justice Ministry officials were working on a new lenient and far-reaching interpretation of the 1983 law, which would allow every business to present itself as kosher – without any supervision. Chief Rabbinate officials were furious, claiming that the public would be misled and that it would lead to the "destruction of state kashrut." The religious and haredi parties are demanding that Prime Minister Benjamin Netanyahu amend the law so that it leaves no room for interpretation.

The discussion began following a petition filed by the Israel Religious Action Center on behalf of two restaurant owners from Jerusalem, Shai Gini and Yehonatan Vadai, who claimed that they serve kosher food although they don't have a supervision certificate on behalf of the local rabbinate, and are therefore entitled to present their restaurants as kosher. The petitioned the court after receiving fines in accordance with the acceptable interpretation of the law, that a business must not present itself as kosher in writing if it is not supervised by the Rabbinate. Attorney Shapira-Rosenberg claimed that their freedom of occupation was being harmed, and asked that the law be canceled or given a new interpretation which would legitimize their actions.

'There is more than one way to be Jewish'

Although the law states that "a restaurant owner will not present the restaurant as kosher in writing, unless it has been granted a kashrut certificate," the Justice Ministry ruled that the only forbidden misrepresentation was presenting the place as kosher and under the Rabbinate's supervision. Nonetheless, the attorney general partly accepted the Rabbinate's demand and ruled that the word "kosher" would not be written.

Rabbi Aaron Leibowitz, a Jerusalem Council member on behalf of the Yerushalmim faction and the initiator of the "Private Supervision – Communal Kashrut" project, said: "We see business owners' strong desire to receive a kashrut certificate not through the Chief Rabbinate. The project began in Jerusalem, and in the past two years it has been gaining momentum in many businesses in the city. In the past year we have expanded to Tel Aviv as well. "The kashrut mitzvah is based on trust, and in the private supervision we seek to create trust between businesses and kashrut observers, while relying on all the demands of the Halacha," the rabbi added. "The public is thirsty for this change, the businesses have had enough of the Rabbinate, and we are entering this important void." Religious-Zionist movement Ne'emanei Torah Va'Avodah said in response that the attorney general's decision demonstrates the urgent need to regulate religion and state relations. "As we warned during the elections, ignoring the issue isn't a solution. The problems in regards to kashrut, conversion, religious courts and burial will not disappear, and as a society we must solve them," the movement said in a statement, calling for an overall regulation. "Ignoring the issue or the cosmetic attempts of the responsible bodies, including the government and the Ministry of Religious Services, lead to a complete collapse of the kashrut system and harm the state's Jewish character." Yizhar Hess, the executive director of the Masorti Movement in Israel welcomed the attorney general's decision as well, calling it "a ray of hope." "We need many more rays of hopes like this one in order to light up the darkness imposed on us by Israel's Chief Rabbinate," he added. "The decision respects the livelihood of thousands of families in Israel, and proves once again that there is more than one way to be Jewish."