David Radzynski, 28, concertmaster for the Israel Philharmonic, is one of the youngest violinists to lead a major world orchestra today.

The packed concert hall in the Israeli city of Tel Aviv went silent, then burst into applause when the 28-year-old violinist took his bow, wearing long coattails and a broad grin.

David Radzynski is still getting used to his first job out of college as the new concertmaster of the Israel Philharmonic Orchestra –  and to being one of the youngest violinists to lead a major world orchestra today.

"It feels great to walk on stage," Radzynski, an American-Israeli musician born in New Haven, Connecticut, said during a short rehearsal break earlier in the day. "Everyone's sitting down ... and then you get to walk on stage and everyone's clapping. Of course it's a wonderful feeling to be part of something that special."

Israel has produced some of the world's most celebrated classical musicians – violinists Itzhak Perlman and Pinchas Zukerman, to name a couple – but its finest virtuosi tend to leave the country for better opportunities abroad. Radzynski's own musician parents, eastern European-born Israelis, left Israel for the United States so his father, composer Jan Radzynski, could pursue his doctorate. They wanted to return to Israel, Radzynski said, but job prospects were scarce. 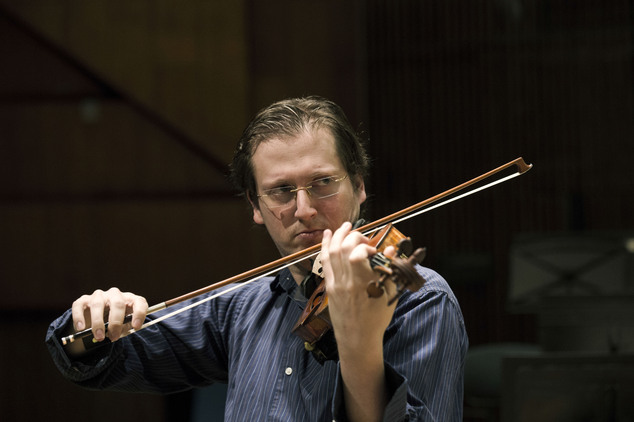 The young violinist's hire is part of a surprising renewal on the Israeli classical music scene at a time when musicians worldwide lament the dwindling of audiences and jobs. In the last five years, some 40 percent of the veteran musicians in Israel's flagship orchestra have retired – replaced almost entirely by young Israeli talent who might have otherwise pursued careers abroad.

Radzynski, who completed music degrees at Indiana and Yale universities and was concertmaster in Yale's student orchestra, joined the Israeli orchestra in March as one of three acting concertmasters. His co-concertmaster, Ilya Konovalov, was just 20 years old when he got the position in 1997. Several prominent concertmasters landed their jobs when they were young. The Pittsburgh Symphony Orchestra nabbed Noah Bendix-Balgley when he was 27, and he became first fiddle last year for the Berlin Philharmonic at 29. In 2001, Nurit Bar-Josef was appointed concertmaster of the National Symphony Orchestra in Washington, DC, at the age of 26. Traditionally, a concertmaster is an orchestra's showcase violinist. His or her job is to lead the orchestra to play in unison and serve as an authority on bowings and other matters of musical technique. When the audience applauds at the end of a performance, it is the concertmaster whom the conductor approaches for a handshake. Radzynski is stepping into a leadership role in an orchestra with historical heft. After Hitler rose to power and Jewish musicians were dismissed from many European orchestras in the 1930s, Polish Jewish violin great Bronislaw Huberman handpicked the best Jewish musicians across Europe and brought them to British-ruled Palestine, forming what would become the Israel Philharmonic Orchestra -- and likely saving their lives in the process. Scientist Albert Einstein helped raise money for the new orchestra, and the renowned conductor Arturo Toscanini conducted its first concert in 1936 as a protest against Nazism. Today, prominent conductor Zubin Mehta directs the orchestra. It bills itself as Israel's international cultural ambassador and an orchestra representing Jews worldwide, said Avi Shoshani, the orchestra's general manager. Radzynski, he said, was a perfect fit. "He is Israeli, he's Jewish, extremely talented and a profound musician, and he's young. What more can one expect?" Shoshani said, speaking in his office in the Palace of Culture, Israel's main concert hall that looks out onto a sparkly white plaza in downtown Tel Aviv. A performance on Israeli radio helped Radzynski land the job. An Israeli cellist heard the broadcast six years ago, and when Israeli labor laws recently forced the philharmonic's previous concertmaster into early retirement, the cellist encouraged the orchestra to consider the violin student for the position. At that time, dozens of contestants were already being considered in a blind audition process in which violinists play for a jury behind a screen. But in his case, the orchestra flouted the formal rules and brought Radznyski directly in front of the judges. He wowed them with a Bartok concerto – Shoshani called it "exquisite" – and returned for more rounds. He was offered the job just a half an hour after his final audition. "Other orchestras might look for someone who is experienced as a concertmaster," said principal violist Miriam Hartman. "We are willing to take a risk with young people who we see have tremendous potential, as he does." For Radzynski, who speaks Hebrew and spent childhood summers in Israel visiting relatives, it was a homecoming of sorts. A local newspaper article about him led to a reunion between his father and his father's long-lost friend – the two fought together as Israeli soldiers in the 1967 Mideast war. Radzynski says he is overwhelmed by the warmth of the orchestra's musicians. Some even helped him find an apartment and navigate Israeli bureaucracy. He still hasn't made it to the beach in his newly adopted city. "The coffee is amazing, the food is amazing," he said of his new home. "It's a conflicted country, but the people are very warm." But the orchestra has not been able to avoid issues stemming from the Israeli-Palestinian conflict. During tours in recent years, there were demonstrations outside concert halls, protesting Israel's policies toward the Palestinians. Protesters picketed outside Carnegie Hall in New York and repeatedly interrupted a concert at London's Royal Albert Hall. A recent concert took place during another kind of confrontation: scuffles in Tel Aviv between Israeli police and Ethiopian Israelis protesting alleged police harassment and racism. As demonstrators upturned police cars and officers fired stun grenades, inside the Palace of Culture a few blocks away, silvery-haired women in sequined dresses sat in cushioned seats, and a French duo played a crowd-pleasing encore.

Then Radzynski led the orchestra in Beethoven's dramatic Fifth Symphony – a coincidental soundtrack to the storm brewing outside.