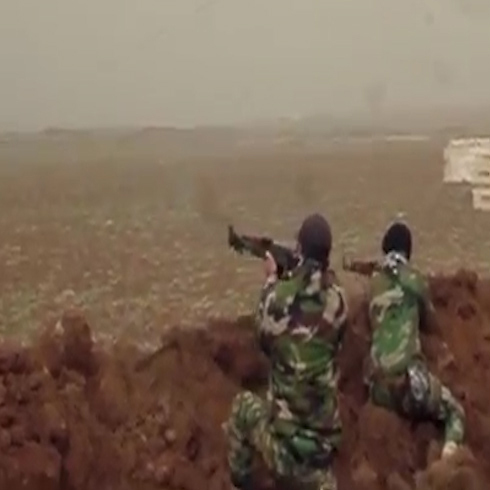 Inside Hezbollah's war in Syria

Here in pockets of the rugged mountains near the Lebanese border, the distinctive yellow flag of Hezbollah now flies where al-Qaeda militants once held sway.

These gains in the Qalamoun Mountains represent a bright spot for embattled Syrian President Bashar Assad's government, now reeling from a unified insurgent assault in the country's northwest. And again, they show the power and influence of the Lebanese militant group in Syria's civil war, grinding on into its fifth year after killing more than 220,000 people.

The Qalamoun Mountains are on the Syrian side of the border with Lebanon. They tower near Syria's capital, Damascus, and linking that base of Assad's power to the coast, an enclave of his Alawite sect, an off-shoot of Shiite Islam. But the Sunni militants of the local al-Qaeda chapter called the Nusra Front and the Islamic State group, have been dug into the terrain for years. Although Hezbollah officials say a full-blown assault to recover Qalamoun hasn't started, Hezbollah fighters in recent days have captured large areas and strategic hills. On Thursday, Hezbollah fighters attacking from the fields of the Syrian border town of Assal al-Ward met comrades on the offensive from the outskirts of the Lebanese village of Brital. "The situation is better than perfect," one smiling Hezbollah fighter said, speaking along with others anonymously as part of the conditions Hezbollah set to allow AP journalists to make the trip.

Insurgents appear to have left their camps in a hurry. Groceries, medicines and other supplies littered their camps. At a Hezbollah position, fighters installed a 130 mm cannon pointed deeper into Syria. Wooden ammunition boxes nearby bore Persian words — a sign of the support of Iran, a major benefactor of both Hezbollah and Assad.

Hezbollah leader Hassan Nasrallah.
Shelling could be heard in the distance, which Hezbollah fighters attributed to clashes around Syria's Barouh mountain to the north. Two giant Hezbollah bulldozers ground out a sand road on one of the region's mountains. Some 3,000 militants are in the Qalamoun region, almost equally split between the Nusra Front and the Islamic State group, a Hezbollah commander recently said in Beirut. He said Hezbollah and Syrian troops surround the Qalamoun from the north, the east and the south, as well as part of the west, squeezing the Islamic militants who remain. The total area of the Qalamoun being contested is about 1,000 square kilometers (386 square miles) — of which 340 square kilometers (131 square miles) lie in Lebanon and are under militants' control. Hezbollah cites that fear of militants sweeping through Shiite and Christian villages in diverse Lebanon as the reason for their involvement in Syria. "We are giving our blood so that people (in Lebanon) live with dignity and safely," Hezbollah leader Sheikh Hassan Nasrallah recently said. But analysts say the fight is not expected to have immediate military repercussions in Lebanon — though it directly affects Assad's survival and Hezbollah's reputation. "The party cannot take military action in the area without a guarantee of victory, since a further defeat in light of those in northern and southern Syria would be disastrous," wrote Michael Young, opinion editor of Beirut's Daily Star newspaper. Young also warned victory is not assured, largely because the vast, rugged region is difficult to control and the Syrian army's combat effectiveness steadily has deteriorated in long years of fighting. Others fear the Qalamoun offensive could spark Sunni militants to launch attacks in Shiite areas of Lebanon itself, including Beirut. A wave of bombings targeting Hezbollah strongholds in 2013 and 2014 left scores of people dead and wounded. Already, residents in a southern Beirut stronghold of Lebanon say security has tightened in the area, with officials searching cars and checking identification papers. Former Lebanese Prime Minister Saad Hariri, a harsh critic of Hezbollah, has said Lebanon is not responsible for the group's actions. "Only Hezbollah is responsible for the repercussions of its involvement in the war at the service of" Assad, said Hariri, who lives in self-imposed exile in Saudi Arabia and France. But others disagree. Christian politician Karim Pakradouni told Hezbollah's Al-Manar television station Sunday that "the battle should be carried out no matter how much it costs because it will end terrorism in Lebanon."